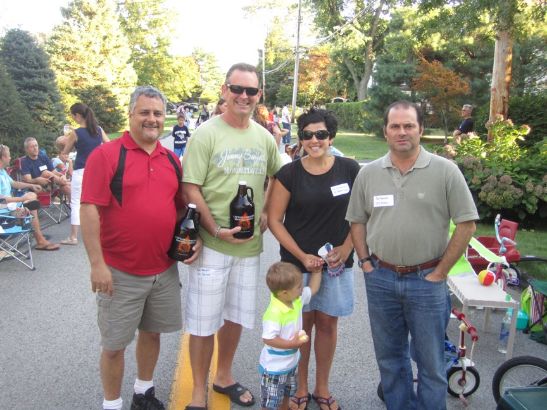 Brew, Kids on the Block

And, of course, there was the array of fine craft beer we associate with all of the above, along with Columbus Day, Flag Day, Sadie Hawkins Day and National Secretary’s Day.

Instead of bringing the party to the tasting room, we brought the tasting room to a block party in the neighborhood, a few miles north of Captain Lawrence HQ. We had the Pumpkin Ale, the hopped up wheat ale Limone Luppolo, the intensely hoppy India Pale Ale, and the flagship Freshchester Pale Ale–and a colorful lineup of neighborhood pals old and new to do the sampling.

It is 80 and sunny, not a cloud in the late-afternoon sky. Kids zoom by on an array of scooters, Big Wheels and bikes, giving narrow Pythian Avenue the feeling of Rte. 287 at rush hour. A trio of teens from the ‘hood is setting up their amps and instruments to provide the musical backdrop. And the sampling has begun, under the shade of a tree, with the Pumpkin Ale. 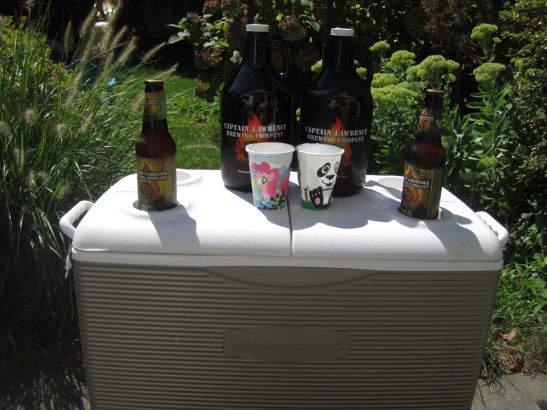 The Pumpkin is brewed with natural pumpkin puree and spices that include nutmeg and allspice. We are sampling out of My Little Pony cups, a holdover from a kid’s birthday party. “It’s good, it’s spicy,” says Donnie Maldonado.

Christine George appreciates proper beer—Allagash White is her favorite–and stocks the fridge with the good stuff, only to have her father demand a Bud Light. She says the Pumpkin Ale is “good anytime”—even on a sunny summer day a few months before Halloween. “It’s subtle,” she says. “I like the cinnamon.

It’s Christine’s first time at the block party, having moved to the neighborhood just before the 2012 bash. “I drove by last year, and everyone looked like they were having so much fun,” she says. “It’s nice to get to know people beyond seeing their faces.” 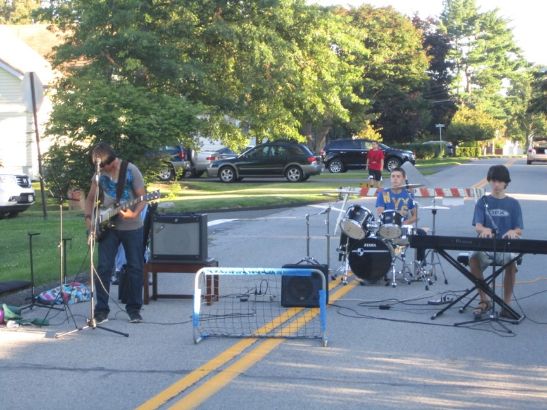 The block is blessed with abundant musical talent; panelist Donnie—his wife’s name is, no joke, Marie—fronted the band Wakeup Call at block parties past, and he and Walpole have been known to plug in after dark for an impromptu Beatles medley on vocals and guitar.

We move on to the Limone Luppolo. Christine makes a face above her My Little Pony cup. “It’s got a weird after-taste,” she says. Not her style.

It reminds Rob of the Brooklyn East India Pale ale. “I like it a lot,” he says. “It’d be very enjoyable for a two-beer stretch.”

More and more neighborhood folk show up, greeting their friends, setting up folding tables and chairs, and popping open a beer from the cooler.

The Sputniks crank out some Hendrix, some Zeppelin, some Chuck Berry. They may be kids, but they respect the classics.

We are on to the India Pale Ale, which our panel gobbles down almost as quickly as it hits their cups. “This is so ridiculously good,” says Rob. “I wish this was more widely available.”

And we conclude with the beer that started it all for Captain Lawrence: The Freshchester Pale Ale. “It’s a family favorite,” says Rob. “Get my wife over here.”

The Pale Ale makes heretofore pensive panelist Paul Grower perk up. “You can tell it’s a microbrew by its taste,” he observes. “That strong flavor.”

Donnie calls the Freshchester “a beer you could drink all day.” When the sun is shining, music is playing, and no one is driving, that could be a viable gameplan.

Rob describes the Pale Ale as a “standard.” “Even though it’s Captain Lawrence’s first beer, it incorporates the best of everything they make,” he says. “Everything revolves around the original.”

Vikram and his Sputniks work out a few feedback issues before kicking into some Nirvana. Talk about Teen Spirit – the lads can rock.

The submarine sandwiches from Bella Italia—Italian, American, chicken & mozzarella–have arrived. On an adjacent lawn, kids gang up on a “Monster”—some poor, sweating, wheezing dad at the bottom of a pile. When darkness sets in, the kids chase the numerous bats creasing the nighttime sky, tell ghost stories, and howl like werewolves. As Vikram strums the opening notes of Stairway to Heaven, there are no lighters in the crowd, but the kids do sport glowing finger lights they pulled out of the goodie bag.

We conclude our formal tasting for a more casual one, and I thank the panelists for pitching in. “I can’t think of the last time,” notes Rob, “that I was thanked for drinking beer.”