People are reading
You are at:Home»Chefs»The Farmer & The Chef: Restaurant North & Sycamore Farms

For many of us the acronym CSA (Community Supported Agriculture) becomes a regular part of our summer vernacular with sentences such as, “I have my CSA pick up today” or “this came from my CSA, isn’t it beautiful”,  “which CSA do you belong to?”.  Supporting our local farms through CSA’s, farm stands and the great farmers markets we are so lucky to have not only feels right, it is right on so many levels. We are participating in our communities, we’re supporting our local economy, we’re buying and eating fresh, locally grown food and we are helping our local farms to sustain and grow.

The next evolution of the CSA that’s been going on over the past few years is RSA (Restaurant Supported Agriculture).  This is where farmers and chefs forge relationships that result in us getting that same wonderful, locally grown food — only this time from a restaurant.  I sat down recently with Eric Gabrynowicz of Restaurant North and Kevin Smith of Sycamore Farms.  Theirs is an especially interesting story because of the history these two men share. They’ve know each other since they attended the same nursery school in Montgomery, NY.   They played little league together, shared in childhood adventures and developed a relationship that is still strong today, a relationship that now has the added element of business.

Kevin comes from a farming family and Eric was exposed to it early.  After the little league games the kids would go to Kevin’s house to be greeted by a delicious flat of farm fresh strawberries or peaches.  Clearly that left an impression on Eric as he is a big supporter of farms and locally grown foods.  Kevin didn’t go directly into the family farming business, instead he worked as an elementary school teacher in the school that both he and Eric attended. He did stay involed stay involved with the family business though on weekends at the Union Square Green Market, which they still particpate in some 20 years later.  At one point in time,  Eric told Kevin’s family that he was going to be a chef and a light bulb went off.  If Eric helped work the market they’d introduce him to the chefs that came through and chefs did come through the Market. He met Mario Batali, Dan Siverman, Danny Myers and Michael Romano which eventually led to Eric’s job at Union Square Cafe.  The days were long and the work hard but it’s clear that a respect for farmers and local produce never left Eric. 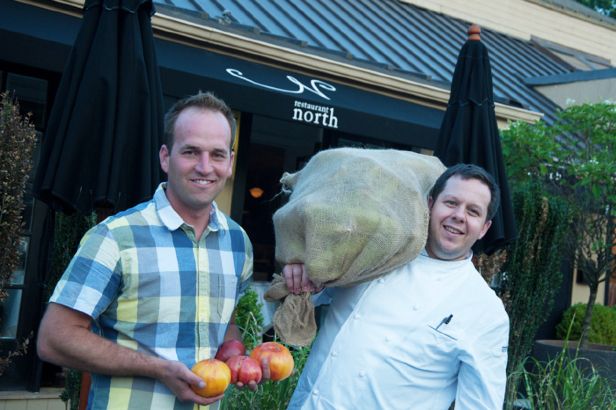 Then the time came when Kevin’s parents were ready to move on and away from the long days and many, many hours spent at the farm and Green Market.  That’s when Kevin decided to step in full-time.  One of the first things he did was try to diversify the business so that not all the eggs were in one basket so to speak (that basket being the Green Market). He tried a CSA and a few other things including conversations with Eric, who at that time already had relationships with several farms.  Then one Spring Eric called Kevin for an order and the rest, is history.  Kevin has been supplying Eric with what he refers to as staple products: heirloom tomatoes and corn primarily, for three years now.  Eric also works mainly with two other farms:  I & Me, and Bloominghill Farms, with each farm having a specialty crop or crops that they offer. 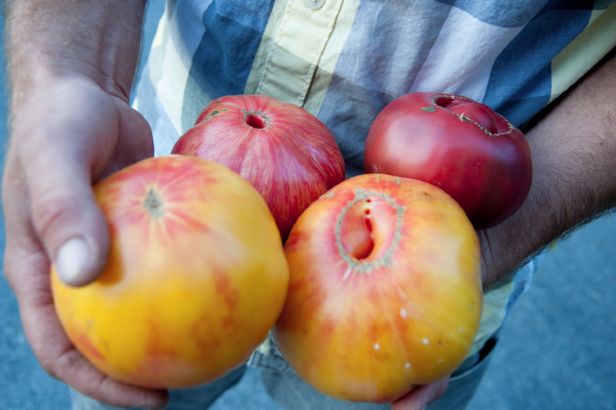 There’s an ease of conversation and laughter between Eric & Kevin that comes from a relationship that has spanned (and I’m guessing here) over 30 years. One word that came up several times throughout our conversation was trust.  Actually, that’s a word that came up repeatedly with all the farmers and chefs I spoke to — trust, integrity and responsibility.  When a farmer tells a chef that a certain product will be available at a specified time and the chef builds a menu around that product — that’s trust and you can see where the responsibility and integrity come into play.  While the relationship between Eric and Kevin is unique in its longevity, all the farmers and chefs I spoke to had such respect for each other and the work they each do.  It really is a special relationship that we all benefit from.

Eric and Kevin bounce ideas off each other, ispire each other to try new things, they support each other’s businesses. One year Kevin met Stephen Mancini’s family, Stephen is Eric’s partner at Restaurant North. They shared some very special family heirloom tomato seeds which Kevin has been growing since. “San Marzanos” Eric specified, and to hear the enthusiasm and detail with which Eric described these tomatoes put a smile on my face.  This is a chef who clearly loves his ingredients.  The relationship has not been without little mishaps. One year Eric asked Kevin to grow Hubbard Squash and Kevin happily agreed and grew two rows!  Now Hubbard Squash is a huge squash that Eric only needed a few of and two rows produced pounds and pounds of squash — ooops.  A lesson learned, Hubbard is a great squash that over time did become a good seller — just not two rows worth.

Nature being what it is things don’t always go exactly as expected either.  There are occasions when Kevin might feel that something is not quite as good as he’d want it to be and he’ll call Eric and let him know.  That’s where the integrity comes in.  Kevin has a strong sense of pride in what he delivers and Eric in turn respects the ingredients and the ways in which he presents them.  And if you’ve ever eaten at Restaurant North (and you should) you know that Eric does some magical things with food. 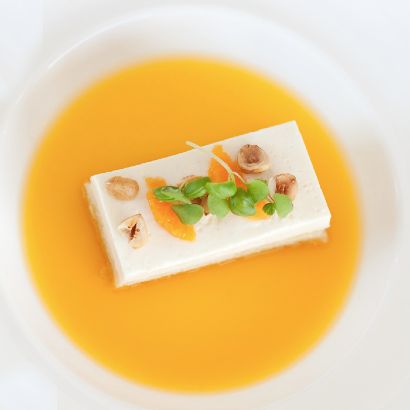 Eric & Kevin remain a constant presence in what is a rapidly growing trend – farmers and chef’s collaborating to bring fresh, locally grown produce to thier customers.  As Eric said, ” there’s nothing but good about that”.  And to that end — we all reap the bounty. 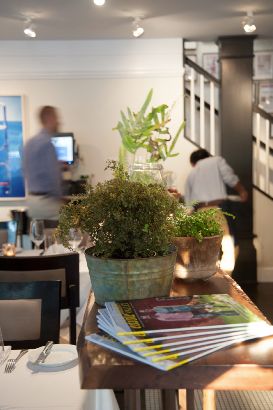 A peek inside Restaurant North 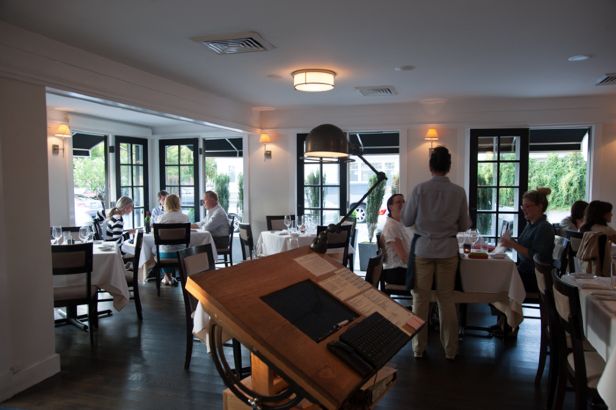