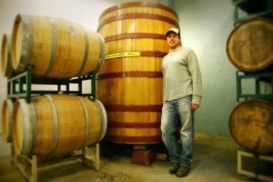 With a few tweaks to its brewing operation, including some re-piping and better temperature control in the fermenter, Captain Lawrence brewery is cranking out a wider variety of beers than ever. That includes the new Harvest Ale—whose hoppy character is immediately evident. The beer was created with 250 pounds of wet hops from Condzella Farms on the east end of Long Island. Hops are typically added to the mix as dry pellets, but the wet hops are, as Scott Vaccaro puts it, “right off the vine”—in the fermenter just a few hours after being picked.

Weighing in at 7.5% alcohol, the Harvest Ale packs a wallop. “It’s got a resinous, hoppy character, with a light malt to it,” says Scott.

Since the Captain Lawrence system is set up for dry hopping–using pelletized hops rather than whole hops–staffer Matt Levy had to jump into the kettle afterwards to scoop out the spent hops. “We knew it would be a pain in the butt, but the beer is great,” says Scott.

The Captain’s limited-release lineup is rocking. There is the Hopcitra—a powerfully aromatic India Pale Ale dry hopped with citra and Amarillo hops. Levy has created the King Zythos Saison, a funky American take on a Belgian brew, while Douglas Roberts is behind the malty Young Wolfington brown saison. As is often the case with Captain Lawrence’s small batch brews, that concoction is named for its creator’s pet—Doug’s ferocious cat.

And here’s a mix you probably never heard of: an imperial Kolsch brewed on behalf of Whole Foods, which is opening a store in Port Chester, and will pour the special “Mega Kolsch”—Kolsch is a lighter style German ale–out of its growler station. “Bigger hops, bigger alcohol, bigger everything,” says Scott. “It’s got a clean, crisp character.”

Clearly falling under the Bigger Everything category is the long awaited imperial stout Frost Monster, named for, yes, staffer Justin Perrone’s dog, and recently getting federal label approval. The Monster is both rum barrel-aged and unoaked, and is looking at a December release—in four-packs and on draft. “It’s roasty and super-malty–it’s one of our biggest beers ever,” says Scott. “It’s been a long process for Frost Monster as we figured out what to do with it.”

If you can’t make it out west, here’s something closer to home: the Harvest Moon dinner at the brewery October 13, which features four courses paired with beers that include the Hops & Roses and Xtra Gold. At $75 a head, Chef Carl Van Dekker, formerly of Blue Hill at Stone Barns, whips up the grub, and rootsy rocker lady Rebecca Haviland provides the musical backdrop.

“It promises to be great food, great beer, and a great time,” says Scott.