At the end of August when I was on the campus of The Culinary Institute of America  attending a food enthusiast Mediterranean Boot Camp, I really felt as if I was part of this premier culinary institution.  I wondered, though, what it would be like to be a real part of this community as a culinary student (even if it was only for a day).  My request to sit in on a class was not only granted, but was going to be a total hands-on participation experience.  The thought of becoming a CIA student for a day left me simultaneously terrified (I’m in waaaayyyyy over my head!) and ecstatic (this is a culinary dream come true!).  A few weeks ago, I walked through the doors of Roth Hall at 6:45 am and found my way downstairs to K(itchen)-15 where I joined chef Katherine Polenz and her ten students in the Cuisines of the Americas class.

Dressed in official CIA uniform of white chef’s jacket, neckerchief, hounds-tooth checked pants and sporting the iconic toque like the rest of my classmates, I knew I had arrived.  Although there were quite a few generations between me and these twenty-somethings, food was clearly our common ground.

Timothy and Taehee hard at work

This is day 6 of a 14 day Cuisines of the Americas class, and today we will be preparing dishes from the American Southwest, including the Pacific Northwest.   These students (a surprising even male/female ratio) are about six months away from graduating.  They have already gone through basic classes like Culinary Fundamentals, Nutrition and Product Knowledge; moving on to more advanced courses like Meat and Fish Identification and Fabrication, Baking and Pastry Skills, and Costs and Purchasing; and have completed their externships where they work in a restaurant to gain practical experience.

In the class, we work in teams on the menu, which consists of tasting plates (amuse bouches), salad, soup, and four entrees. 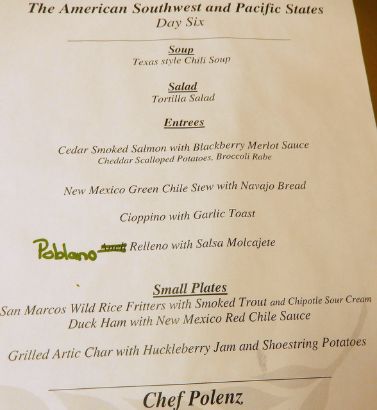 The teams are switched up every two days when the menu changes; so, in the end, everyone has worked together at some point which creates a strong team initiative.  Students each have the opportunity take on the role of sous chef.  Today, it was Alison’s turn; and she calmly kept the pace of the kitchen going strong, continually reminding everyone of the time and then at lunch service, expedites the flow of plates.  As sous chef, Allison was also responsible for completing some of the prep for tomorrow’s Caribbean menu.

I am paired up with Nicole who happens to be the group leader.  It was a role that she was voted into by her peers, and I quickly understand why they chose her as leader.  She is diligent, organized, and focused, managing her extra responsibilities of keeping this group on track and running smoothly with confident ease. 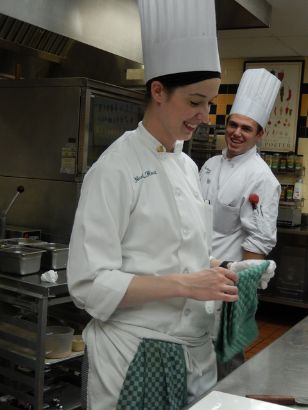 There’s a comfortable order and procedure to everything in this kitchen like the class timeline to guide the students in their tasks, the waste containers which are separated into recyclable, compost, and garbage, and the graduated placement of pots, pans, and bowls in the equipment room. 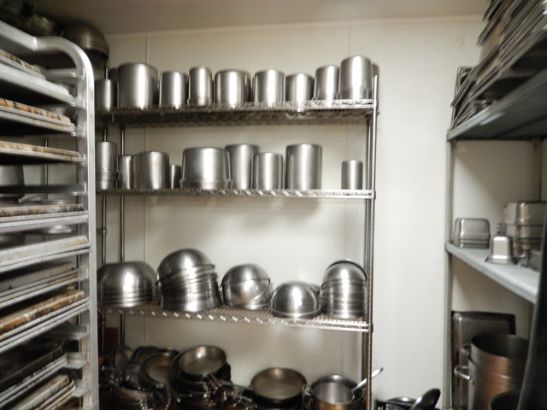 everything in its place

Overall, The Culinary Institute of America runs like one huge restaurant machine.  The classes that are learning to fabricate meat and fish supply their end-products for class menus like today’s salmon fillet.  There is a central food pantry supply where class essentials for the day are organized and boxed for pick up.  And the menu that the kitchen classes produce is offered for breakfast, lunch or dinner service to the rest of the school.

My day as a culinary student begins with setting up our station and prepping for our menu dish:   cedar planked salmon with a merlot blackberry sauce served with scalloped potatoes and broccoli rabe.

Like the rest of the teams, Nicole has concisely written her day’s recipes out, ingredient by ingredient, step by step. 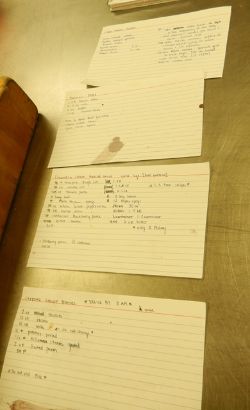 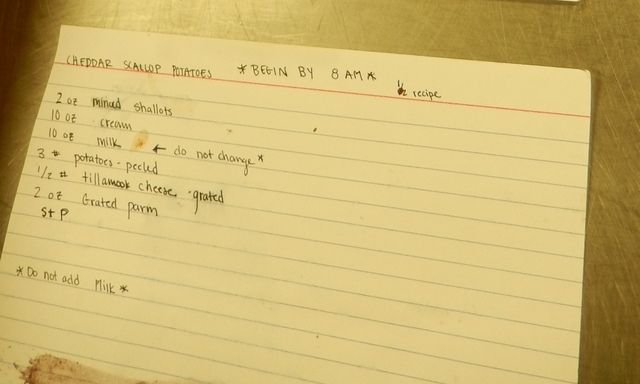 I get to work on the scalloped potatoes, mincing shallots and peeling potatoes.  Nicole brings the milk and cream to a simmer and instructs me to slice the potatoes on the mandoline directly into the mixture. When I asked why the potatoes needed to go right into the pot, she quickly had the answer.  Aside from the potatoes pre-cooking in the milk mixture, adding them immediately into the pot also avoids the browning of oxidation and the starchy liquid from the potatoes actually aids in thickening the sauce.  Once everything is nice and bubbly, the cheese is incorporated; and it all gets split between two pans (half hotel pans to be exact) to bake to a beautiful golden brown in the oven. 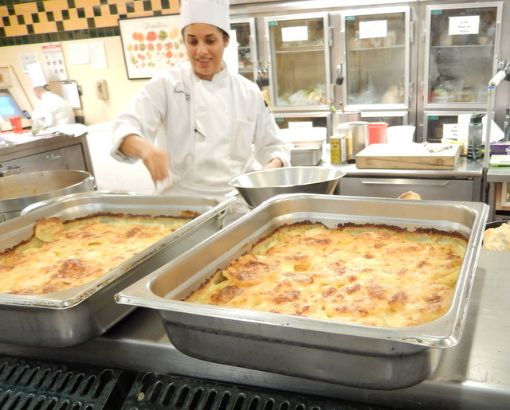 scalloped potatoes hot out of the oven

There is a brief break in the action when chef Polenz calls everyone over to the tilt skillet for a quick demonstration.  This piece of equipment is a large, pumped up electric skillet that makes quick work of browning and braising.  Chef Polenz is starting the process of curried goat for tomorrow’s Caribbean menu.

chef Polenz at the tilt skillet

Working on prep at Harvest on Hudson, I’ve gotten used to seeing whole animals, large and small, but I’m surprised that these students don’t even blink as chef Polenz browns the cut up goat, head and all.  She explains to the class it’s all about 100% utilization of the product (the head is included because the bones will add flavor).  She not only makes them aware of the  cost of the product ($160), but more importantly, she stresses to them to respect that the goat has given up his precious life for us.

The chef instructors at the CIA have the daunting task of instilling in their students the passion, technique, and skills necessary to succeed in the restaurant business.  Chef Polenz embraces all aspects of food and her enthusiasm and expertise is at the core of this class.  Like more than a few of her colleagues, chef Polenz is a published cookbook author (CIA At Home series, Vegetarian Cooking); and if you ever wanted to know how to make crawfish étouffée, all you have to do is tune into the CIA’s you-tube channel for her instructional video. In her free time, she’s been researching how to sprout organic brown rice.  Called GBR or GABA for the amino acid gamma-aminobutyric, simple grains of brown rice are soaked in water in a warm environment long enough to almost sprout or germinate. Once cooked, this basic rice is turned into a bit of a super food with nutrients like amino acid and calcium significantly magnified by the process.

At about 8:30 am, we stop prep for the morning lecture and Powerpoint presentation which encompasses the Caribbean region for tomorrow’s menu.  Chef Polenz’s lecture is packed with information, including history, flavor profiles, and unique ingredients like scotch bonnet and habanero peppers, manioc (a dense potato-like root vegetable also known as cassava or yuca),

Ever seen this root at the market? Now I know what it is!

or culantro (a/k/a sawleaf and similar to cilantro which will be used in a chimichurri sauce with parsley, garlic, lime and olive oil). 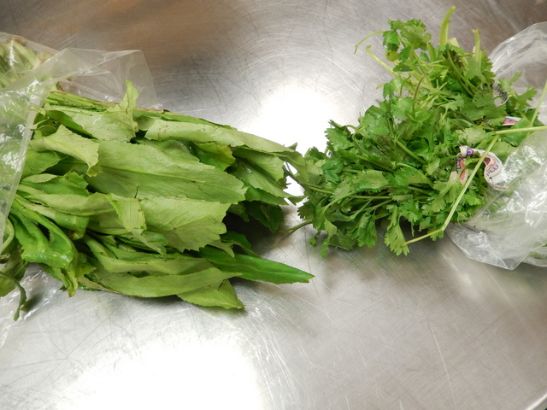 Back in the kitchen, the activity level is stepped up as the clock ticks closer to noon service.  Nicole is busy fabricating (skinning and portioning) her salmon into four ounce pieces that will be smoked. 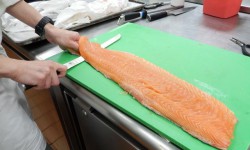 She then turns and tastes the accompanying blackberry merlot sauce warming up on the stove.  It’s too bitter, so she calls chef Polenz over to ask her opinion.

The solution is to sweeten it up with some brown sugar.  In the meantime, I blanch the broccoli rabe with a quick dip in boiling water followed by an ice bath to stop the cooking process.  Then, I portion the veggie so it’s a quick pick up to sauté at service.

By 11:15 am, all the teams have created one demo plate which they take turns presenting to chef Polenz and afterwards, we all get a taste before service starts at 11:30 am. 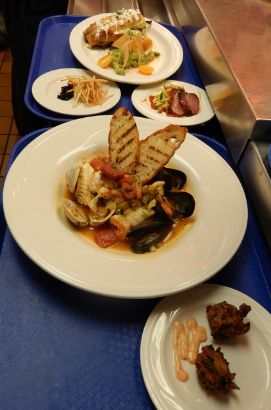 Sous chef Alison takes her place at the front of the line, ready to greet hungry students and explain the menu choices.  Once they decide, she expedites by calling out to the teams to get that dish ready.  The team responsible for that dish, verbally responds back their acknowledgment.  And the process continues until service is done at about noon.  All the remaining food gets plated up buffet style for the team’s family meal, where we get a few minutes to eat and relax before the task of cleaning the kitchen for the next class. 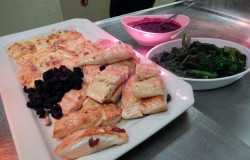 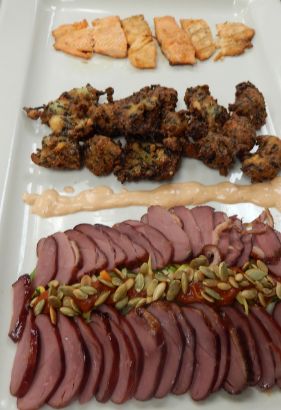 Family meal gave me a welcome break to chat with Nicole.  Every student here has their own story and Nicole is no different.  She graduated from Penn State with a bachelor’s degree in Biological Anthropology and pre-med.  Exactly how did a bioanthro major find her way to the CIA?  When she worked in a restaurant while in college, she realized the emotional link her customers had to the food.  In short, it made them happy; and at the CIA, it was a natural progression to have the opportunity to study the emotional and cultural aspects of food.  She graduates in February, and working side by side with her for just one day, I wouldn’t hesitate to guess that she will be successful in her culinary endeavors.

Since reading Michael Ruhlman’s The Making of a Chef, chronicling his adventures at the CIA about ten years ago, I’ve always wished that I, too, could experience what being a culinary student is all about.  My day in a CIA class was everything I imagined and more!  Recently, I was beginning to think my passion (some might say obsession) with food might be a little over the top.  My short time at The Culinary Institute of America with this serious group of students made me feel not only accepted, but quite normal.  So, the next time I need a little bit of culinary support for my passion, I know there’s a place in Hyde Park that will welcome me with open arms.