People are reading
You are at:Home»Cooking»Cooking with the Seasons: 5 Foods to Eat in October

Close your eyes and picture October: what do you see? Burnt orange skies. Warm, sunny, humidity-free days. Chilly, cozy nights. And smell? It’s got to be the comforting aromas of nutmeg, cinnamon and baked fall fruit.

The colorful fall season is where the Hudson Valley thrives, with fresh local apples, pears and squash that lend an homey feel to any dish.

Our October cooking tip? Break out the cast iron skillet. This classic kitchen item is great for one-pot meals and really does the tastes and smells of October justice. Here are our picks for foods to eat in October. 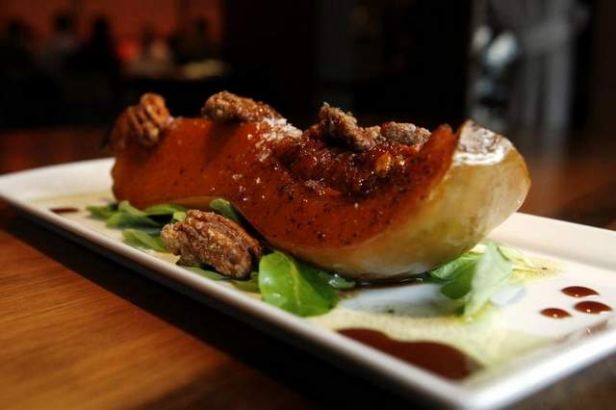 Pork and fruit are an easy match. Season chops and cook in a cast iron pan with whatever sliced fruit you have handy, like plums, apples, pears or peaches.

Or, pick up a pork shoulder. The hefty cut gives a lot of bang for your buck, and braising it fills the house with warm, savory smells. Rub with salt, pepper and flour then sear on all sides. Cook on a low heat for several hours in cider, caramelized onion and tons of thyme. Or mix it up a little: try cooking a pork shoulder Korean-style (bo ssam) or Puerto Rican-style (pernil). Both are great for big parties.

When a pear is perfectly ripe, it can make a satisfying snack feel elegant and refreshing at once. We like pears on an appetizer platter with complementary bites like toasted walnuts and a tangy cheese like Purple Haze, a goat cheese made with lavender and wild fennel from Humboldt Fog. Or use the same combination in the classic pear-cheese-nut salad, swapping out walnuts for pecans, if you like.

Pears work in just about any recipe that apples do. Try subbing them for apples in a classic French tart or homestyle crisp, using cinnamon, brown sugar and finely diced pecans.
Looking for a seasonal cocktail? Try a pear martini, with two ounces pear liqueur, one part vodka and one part freshly squeezed lime juice. Garnish with a slice of pear.

Fennel is one of those versatile vegetables that’s at home in both summer and winter. We love a salad with shaved zucchini (summer!) and sliced fennel (fall!), tossed with red onion and a lemon vinaigrette made with the fennel fronds.
Fennel is also a terrific match with fish. Try stuffing it, along with orange chunks, in a striped bass, then roast the fish whole. Or combine fennel with grapefruit and serve with seared scallops. On a chilly evening, make Dan Barber’s fennel soup. (Barber, chef-owner of Blue Hill at Stone Barns in Pocantico Hills gave the recipe to New York magazine a few years back; just Google it.) Best part? It’s dairy-free and fancy enough to serve at your next dinner party.

These spices can turn just about any recipe into a fall one. Grate them over squash, mix them with oats and flour as a topping for a crumble, add them to rice pudding, or use them to flavor whole baked apples or pears. Turn a carrot cake into something special with just a half-teaspoon of each. Or go savory: use them in a rub to flavor roast chicken or lamb.

There are so many types of squash it can be a little overwhelming. But in general, a good jumping-off point is to roast it because it can either be eaten right out of the oven, or pureed for soup. Acorn, butternut and delicata all roast well and make a bright and pretty side. Halve and drizzle with olive oil and maple syrup, then roast on a cookie sheet until tender. For spaghetti squash, scoop out the flesh and toss with butter, herbs and garlic. Or try one of our old favorites from the now-closed restaurant Peniche: roast butternut squash and serve with candied walnuts and pomegranates.