People are reading
You are at:Home»Chefs»Q & A: Chef Alain Ducasse for Pinch American Grill 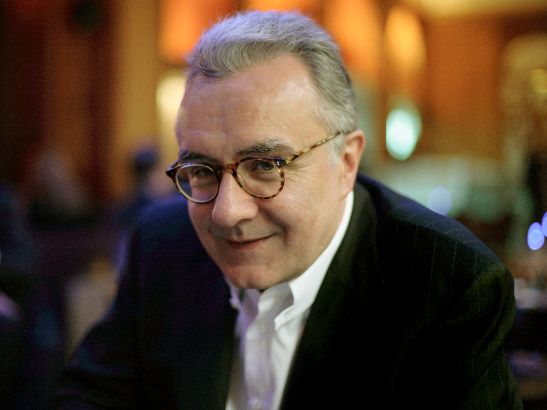 Alain Ducasse has a devoted international fan club. And if you’ve ever had the opportunity to dine at one of his restaurants, you know why. The renowned chef is a master of French gastronomy, delivering his signature haute cuisine in 26 glamorous locations around the world, from Saint Tropez to New York to Tokyo.

His most recent venture is Pinch American Grill, in the mezzanine section of Empire City Casino in Yonkers. But Ducasse’s role at Pinch is not in the kitchen, but rather as a business consultant.

His company, Ducasse Studio, advised on the restaurant’s concept as a modern American grill, with 100 New York craft beers on tap, iPad menus and a casually hip setting. He selected one of his former employees, Fabienne Eymard, to represent his name as Pinch’s executive chef. They also brought in Mark Advent, a casino developer responsible for the New York New York hotel and casino in Las Vegas, Nev.

Ducasse took the time to answer a couple of our questions about his involvement in Pinch, his first foray into the suburbs.

1. Pinch opened to lots of fanfare about it having the Ducasse name attached. Can you talk about the difference between a consulting project like Pinch, and opening a restaurant of your own?

There is a big difference: Consultancy means we work to fulfill specs defined by our client whereas creating a restaurant means designing everything from A to Z, from selecting the location to defining the entire concept.

2. Tell us about some of the interesting other projects Ducasse Studio has consulted on?

We work as an adviser on a regular basis for the Lido, the glamorous cabaret on the Champs-Élysées. Catering is vital for them since it contributes to the magic of the experience. We also developed a special project for one of the leading law offices in Paris. They needed an entirely new approach of on-site restaurant to fit with both the expectations of their high-caliber personnel and their extended work schedule. We also helped a top range spa resort to redefine its food offerings to remain in tune with the health and fitness expectations of their clients.

3. Since this is your first American project, what was different about your approach to Pinch?

The Rooney family looked to Advent, given his casino expertise, to facilitate an introduction to the right culinary partner. Therefore, we worked with a highly professional team with a very clear vision of what the objectives were. I must say that the development phase went very smoothly.

4. How much of the concept-creation and menu and recipe development were a part of Ducasse Studio, and what parts can we attribute to Advent or Eymard?

It’s really a collaborative process! In a dialogue of this quality, it’s difficult to say who brought exactly what. For sure, Mark has the instinct of the casino business and what it takes to satisfy the customers. Fabienne has a perfect understanding of the American clientele and the Ducasse Studio team’s role was to put new ideas on the table. Everyone played out his and her role perfectly, ultimately benefiting the project.

5. What lessons do you hope Eymard learned while cooking at Taillevent in Paris, Caprice in Switzerland and then for you at Benoit in New York?

The diversity of dining experiences and cuisines she takes away proves that she adapts extremely well at any level and any style.

6. Have you ever seen so many beer taps in one place?