Red chili peppers are the ripened fruit of the hot pepper family. If you watch the progression of any red variety of pepper they start of green. I
am often deceived by this with the bell peppers in our garden, that start out green and then gradually lighten and then brighten into a vivid shade of red. I separate the green and red varieties when thinking of spices because, the red 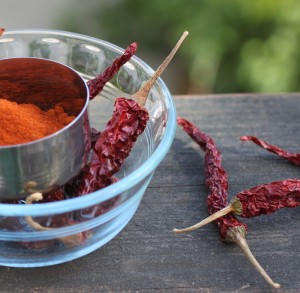 and the green peppers are used quite differently in most culinary uses.

In fact, in this attached picture, you can see how the fresh green chilies are turning orange and then they will finally turn into a red color. 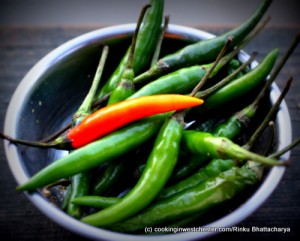 The chili pepper is a native of tropical South America, the name chili
originated from the Aztecs, to mean red.

They were brought to India by the Portuguese, but clearly have become an integral part of the cuisine. Actually, it is worth mentioning that Indian cuisine, due its long standing history and evolution is comprised of several foreign culinary influences. People often do not realize this. So, today’s globally influenced Indian flavors are almost an extention and evolution of this heritage.

In general, the chili peppers can be dried and used whole for stewing, powdered as cayenne and as crushed pepper flakes to add an obvious and
rather potent touch of heat to any recipe. It is difficult to find recipes that offer an intense about of hot chili powder, since with this spice less is more. There are varieties of powder that fall into the family of hot paprika. I tend to add crushed red pepper flakes to a lot of food that I think could use a touch of both color and heat.

Yes, I do think that these spicy beauties are one of the most photogenic in my spice collection, so I often use them to accent food pictures.

My recipe incorporates one of the late winter/early spring delights of our region, maple syrup!

I am addicted to maple syrup. The darker the better, and I think that this deep and flavorful sweetener makes a perfect pairing with an
assortment of spices. I like to use it with shrimp or other seafood. In this quick and flavorful recipe, there is simply one thing to watch – not
overcooking the shrimp.

The single shrimp skewers pictured here are great as one bite appetizers. However, if you want you can make them in larger 6-8 inch skewers
and serve them over rice.

1 tablespoon microgreens (we used micro-mustard greens, that I had grown)

2. Toss the shrimp and let it rest for 15 minutes.

4. Place on a baking sheet and drizzle with the olive oil. Turn the oven on broil.

5. Broil the shrimp on low for about 5-6 minutes, the shrimp should curl and turn very slightly crisp on edges. It is important not to overcook or dry out the shrimp.

6. Remove from the oven and sprinkle with the red pepper flakes and micro greens and serve immediately.