Nick Di Bona is one of Westchester’s chefs to watch. The 28 year-old Culinary Institute of America grad recently opened his first restaurant, Madison Kitchen in Larchmont, after nearly a decade working at Yorktown’s Peter Pratt’s Inn.

And now, if you haven’t had a chance to get to Madison Kitchen, you can watch Di Bona in action on a coming episode of “Chopped” on the Food Network. The episode is titled, “Burnch Boxes,” and airs at 10 p.m. on Tuesday, Oct. 15.

“The show is highly edited,” says Di Bona. “But the part that isn’t edited is what keeps people watching — 20 minutes to cook something with mystery ingredients, it can’t get boring.”

At 10 p.m. Tuesday, watch Di Bona compete against three other professional chefs in three rounds: appetizer, entree and dessert. The chefs are given a mystery basket of ingredients and required to cook and plate an amazing meal in an allotted time.

Di Bona talked with us about the weirdest thing in his mystery basket and the long day on a closed set. He was unable to reveal how many rounds he survived, so if you want to see if he earned the top prize of $10,000, you’ll have to watch. 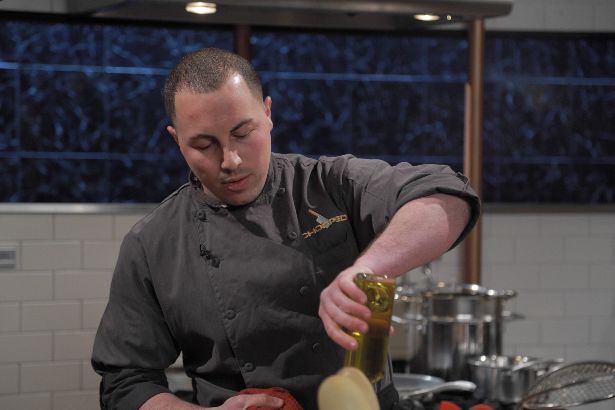 How would you describe your cooking style?

My style is new American, but very New York. Living in New York you never know what to expect with the people, the seasons, the food. The seasons can be kind of unexpected, but you just roll with it. I’m also just a big fan of comfort food in general, it’s one of my signature things.

Why did you want to go on ‘Chopped’?

I would watch the show and literally yell at the television, “Don’t do that! What are you thinking?!” So then one night after work I said, that’s it, I’m going on the Food Network. I filled out the one-page application and figured, if they call me, they call me. Then I had a few interviews and got it. I’m an incredibly competitive person, so when I went in there, it was game time.

What was the biggest challenge about competing on the show?

Just the nature of the beast: the timing. Twenty minutes to cook an appetizer with random ingredients is hard. But as a chef you have to be creative and know your basics; it should be endless. No green beans? Fine, we’ll do it with Brussels sprouts. If you can’t roll with it, you have no business with standing behind that 500-degree grill. And if you can’t look at any item and think about 10 different ways to cook it, then don’t even bother applying for the show.

What was the weirdest ingredient you pulled out of the mystery basket?

I got lucky because all of my ingredients were real food. But the weirdest ingredient of the day was definitely a giant emu egg. Just a big green egg, the size of your hand. I said, what is that? Is that an egg? Is it a foreign avocado?

What would surprise people to know about ‘Chopped’?

The judges don’t wear pants. Joking! It’s a really long day on a closed set with no cellphones. I was there from 6:30 a.m. to 8:30 at night, and there’s a lot of downtime in between rounds. So you are in the zone for 20 minutes, and then you have 3 1/2 hours to sit and nervously wait. And then, boom, crazy cook mode again. It took me two days to get out of it. It was just so mentally and physically exhausting.