I have always hated cauliflower.

One of the things I’ve learned as an adult when it comes to vegetables is that it’s not that I really don’t like them; it’s that I’ve never had them cooked well (sorry, mom).  I grew up with a lot of canned vegetables and frozen medleys that just weren’t very good, so is it any surprise I hate so many of them? (I’m The Picky Vegan over on my own blog, if that explains anything).

So last week I found myself at the farmer’s market, and I saw purple cauliflower.  It looked so pretty.  Purple is my favorite color.  I thought to myself, “but I don’t like cauliflower,” but I bought it anyway.  I figured there had to be a way to cook it where I would like it.

So after a bit of googling, I tried the next best thing, and turned to Facebook to ask my friends how they like cauliflower.  I got a surprising number of responses!

Roasted was the most popular suggestion, and the one with which I went, but other suggestions included grilled, raw, steamed and pureed with truffle oil (planning to try that one another day), made in to hummus and drenched with various sauces.  I had been thinking roasted from the beginning, but I was nervous after reading a few reports of very soggy roasted cauliflower.

I lucked out, because our own Seasonal Chef happened to be reading- and she let me know that the key is to use a very hot oven.  So, with the oven at 450F, some salt, pepper and olive oil, I ended up with some very nicely roasted cauliflower! 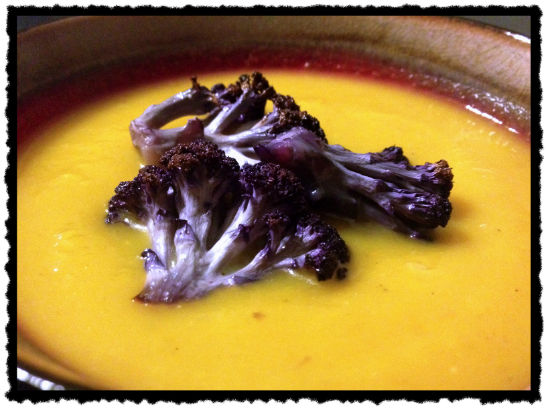 Served over roasted butternut squash soup (my oven got a real workout).

I won’t go as far as to say that cauliflower is my new favorite vegetable, but it was pretty good.  I even have plans to try it again.  It held up nicely as a leftover (reheated in the oven or a toaster oven), which is important for a weekend cook, and it gave me some variety in my diet!  Plus, it was purple.

I thought I noticed a slightly less cauliflower flavor in the purple compared to the regular white variety, but I’d have to make them the same way to say for sure.  Surprisingly, I might actually do that.  And if you knew how much I don’t usually like cauliflower, you’d be surprised too!