In case you missed the story on Fox 5 last Thursday, or the congratulatory tweet from Gov. Cuomo, Captain Lawrence grabbed a gold medal for its Hops N’ Roses sour ale at the Great American Beer Festival—a popular topic of discussion in the tasting room over the weekend. In the spirit of celebrating special awards, the brewery’s guests shared their most significant medal/ribbon/trophy/other official recognition of awesomeness. 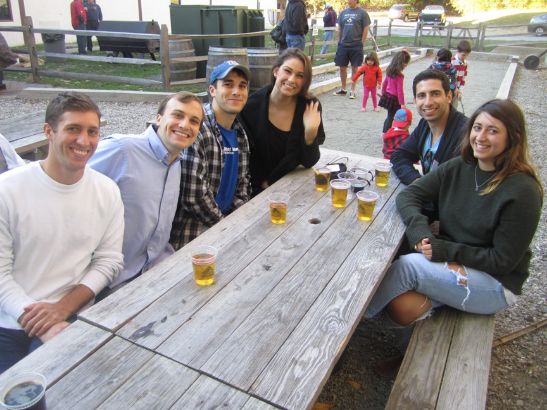 Kate had taken her father, Dean, to the tasting room a few days before. He’s a “consumption guy,” she says, with a taste for fine food and beer. “He was pretty amped about coming,” says Kate, who deserves a non-lame trophy for being such a standout daughter.

Fueled by the Friday fun, she decided to spend a sunny Sunday on the patio with her friends and a few Liquid Golds. Katie Brett of Chappaqua speaks proudly of a gymnastics trophy earned many years ago. “Gymnastics was going great—until I got to be six feet tall,” she says.

Their pals Kevin and Brian Francese of Chappaqua share more than a bloodline—the brothers also scored medals in wrestling tournaments growing up, in the 96-pound weight class. Ryan Light of Los Angeles shrugs as he struggles to come up with an accolade. “Most likely to be arrested?” offers Brian.

Across the table, Pleasantville’s Chris Palladino isn’t doing much better. “I got an accounting award once,” he says. “I’m not really proud of that.” 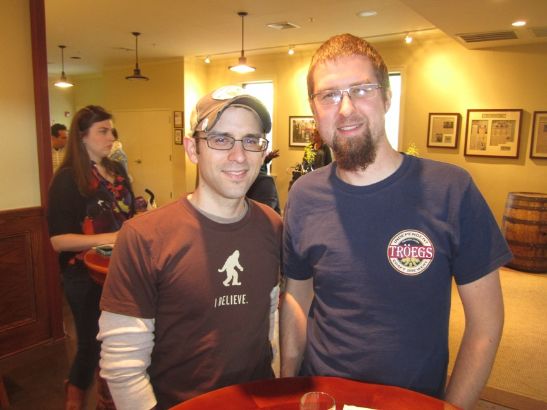 Inside the brewery, Adam Weiss, dad Bill Weiss and friend Greg Woody of Stony Brook, Long Island have been in breweries all day, ferrying across the Long Island Sound to Two Roads Brewing in Stratford, then on to Captain Lawrence. Adam likes the India Pale Ale, Bill the new small-batch stout Knifey Moloko, featuring espresso and lactose, and Greg the Liquid Gold. “I like Belgians,” he says.

Sporting a Troegs Brewing t-shirt, Greg enjoyed a Little League championship when he was 11, after countless winless seasons, and much more recently took home a prize in a Brewers East End Revival (BEER, for short) brewing competition with a unique Belgian pale ale. “I’d made beer from kits, but this was the first time I tried it completely out of my own head,” he says.

Adam, meanwhile, grabbed an Honorable Mention for his brown ale. 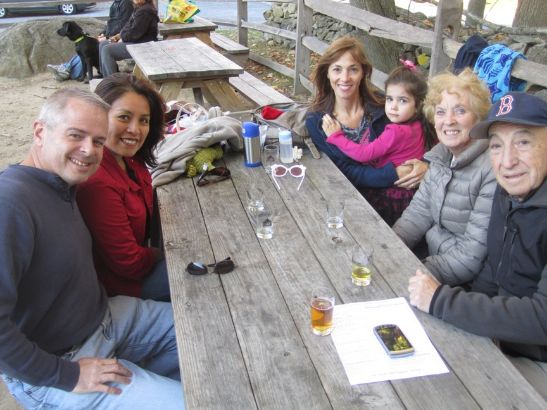 Back on the patio, Dr. Alan DerKazarian of Belmont, Massachusetts too speaks of Little League glory; he was recently profiled in his local paper, under the headline “Mr. Baseball”, for his 35 years of running the local youth baseball league. “I expected a little article, not 3/4 of a page and a big picture,” he says.

Drinking the Captain’s Kolsch, he smiles under his Red Sox cap and eagerly awaits the World Series. Wife Isabelle modestly mentions being first in her class back in her native England.

As the sun starts its descent, the heat picks up on a pig in the smoker; CL beertender/filmmaker Rob Catalano is prepping for a wrap party for his new slasher flick Whispering Pines. Time will tell if he gets a shiny gold statuette for his efforts. “It’s my thank you to everybody for being part of the film,” says Rob, also celebrating another notable release with his Knifey Moloko brew, the name a subtle wink to A Clockwork Orange. 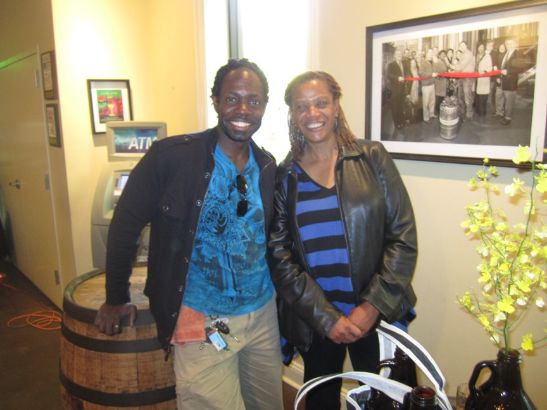 Finally, Shawn Bennett of White Plains credits Captain Lawrence for a most unlikely feat for a beer aficionado: a bodybuilding title. Shawn won a pair of trophies at a 2011 INBF bodybuilding championship. His secret to success? Performance-Enhancing Drafts–six ounces of India Pale Ale before working out.

“It kind of numbs you, and you can work out with a little more intensity,” he says.

Shawn clearly does things his own way: he plans to fill a growler half with IPA and half with the Moloko.

Across the barrel, Adrienne Rivers of White Plains sips her IPA. Her claim to fame? A Fulbright scholarship, in fact, to teach journalism in Ghana. She didn’t get a trophy or a certificate, but Adrienne did leave Africa with some fond memories. “We drank lots of beer while we were there,” she says with a winning smile.

The “Notes From the Tasting Room” books are in! Featuring 66 essays, photos and a foreword from Scott Vaccaro, they’re on sale in the tasting room, and on Amazon.