People are reading
You are at:Home»Chefs»Spices and Seasons – Chef Anthony’s Butternut Squash with Fennel and Spices 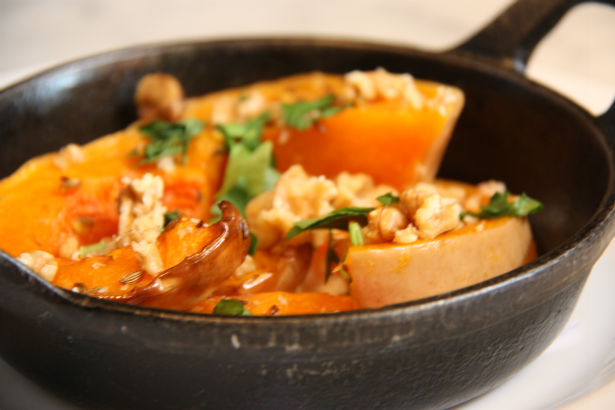 A couple of weeks back, I was lucky to stop at Village Social with a group of Small Bites bloggers and was fascinated by the diversity of spices and seasoning used in an otherwise seasonal new American menu. The dish that truly caught my attention was a roasted butternut squash dish that had very distinct notes of fennel (a spice that is very close to home) and then more. A more detailed description of the evening is featured here at Liz’s post.

I had to talk more with the Chef to chat spices. I was thrilled and absolutely facinated by the chefs sheer enthusiasn about blending and creating new flavors. Chef Mogan Anthony, grew up in Malaysia in an Indian household and later moved to Singapore. The diverse locale of Singapore exposed him to a lot of ecclectic flavors and also was the begining of his culinary journey. He began most of his formative culinary training in the French restaurant at the Four Seasons before moving further to the US. He was very impressed by the commitment of his mentors to the art and science of cooking. All of this of course explains the chef’s very creative an nuanced approach to spicing.

He chatted with me and explained to me that his favorite spice was fennel, that is the spice of the week and I have chatted about it on todays post about fall spices. He felt that the spice’s sweet anise notes complemented a lot of different flavors particularly in a lot of diverse cultures. He also likes fennel because it was subtle and not overpowering. This makes it a great spice to compliment milder sweeter dishes on the fall table.

Indeed, the anise like notes of fennel does work well with a variety of cuisines, such as Indian, Italian Chinese and other far-Eastern and Meditteranean flavors.

One of the dishes that did catch my attention and was indeed redolent with a nice balance of spices, happily married to Hudson Valley produce was  a roasted butternut squash dish. I could taste the fennel, but had a hard time identifying the notes of lavendar. The chef was gracious enough to share a free-style recipe here which is on my list to try as soon as I head over and pick up some lavendar.

For the squash
For the vinaigrette