People are reading
You are at:Home»In the News»Vermont Sail Project Delivering Local Food to Nyack and Yonkers, Oct. 22 and 23 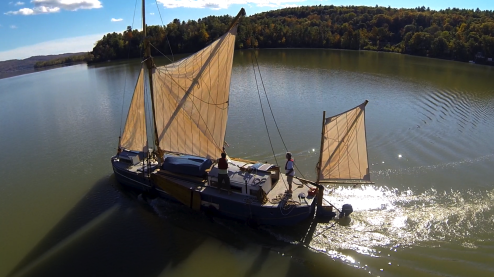 Vermont farmer Erik Andrus is encouraged by the recent movement toward more sustainable eating practices, but he says it’s not enough.

“I’m interested in low-tech approaches to food and energy issues,” Andrus says on his blog.  “I like to reflect on how our forebears made do and how this could inform the present.”

So on September 6 he launched Ceres, a ship he built himself, down the Hudson River, traveling 300 nautical miles from Ferrisburgh, Vermont to New York City. The ship will make two stops in the Lower Hudson Valley: Nyack on Oct. 22 and Yonkers on Oct. 23.

From 11 to 4 p.m. on Tuesday, Andrus and his team will be at the market at Hook Mountain Marina in Nyack, and on Wednesday can be found just north of the Yonkers pier at the Groundwork Hudson Valley Science Barge.

According to Andrus’ website, the Vermont Sail Project began with his idea for a carbon-neutral transport company that connects the farms and forests of Vermont with the Lower Hudson Valley.

“Producing food sustainably is not enough,” Andrus writes. “The other half is sustainable transport of goods to market and equitable exchange.”

The Vermont Dail Project’s voyage will conclude on October 27 at the New Amsterdam Market in New York, followed by a beer pairing dinner the following night at Jimm’ys No. 43.