Hudson Valley Restaurant Week Fall 2013 is nearly upon us, kicking off on Monday November 4 and ending on Sunday November 17, 2013. There will be many wonderful options for us to eat at so many fantastic restaurants. I for one look forward to this event each time it comes to us. Most people will tell you that stepping out for dinner tends to be habitual. When you find a restaurant you like, chances are you will go back, and perhaps even become a regular. There is something very comforting about walking in and having the hostess or the server remember you. I would encourage you to step out of your comfort zone, and even perhaps your neighborhood and try out a couple of new places. What better opportunity than this with the cost of lunch and dinner perfectly priced? 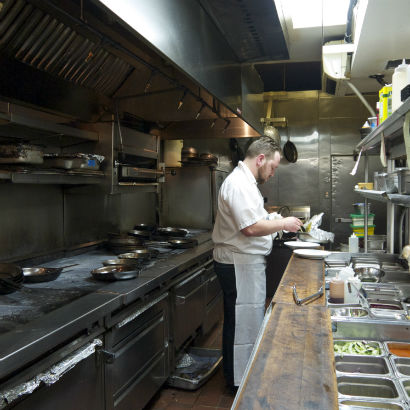 Right after graduating from culinary school I landed a spot in the Tarry Lodge kitchen. Working under Andy Nusser, the Executive Chef and Owner, I have always been proud to say that I was a part of the new beginning of that restaurant, an experience I will take with me forever. There were only a handful of us helping Andy create the new menu back in 2008, including Sam Epps (pictured above) who is now the Chef de Cuisine in Port Chester.

Sam was classically trained in French cuisine at the International Culinary Center (formerly The French Culinary Institute). After graduating he headed to Italy and worked under Sandra Rossi Lotti at Toscana Saporita. A chance meeting with Mario Batali landed him a position in the Babbo kitchen in 2006 when he returned to the U.S. Starting, as all great chefs do, on the salad station, he quickly jumped to all the positions in the kitchen including expediting. During the time Sam was at Babbo Andy had left of open Casa Mono, so it would not be until 2008 that they would work together bringing Tarry Lodge to fruition. In those very early days, before Tarry Lodge opened Sam was on the line, Mario La Posta (now Chef de Cuisine in Westport) on pizza and yes, me, the anti-pasti girl. It was a crazy fun time back then.

Tarry Lodge has hit its stride. Andy splits his time between Casa Mono in New York City, Tarry Lodge in Port Chester and Tarry Lodge on Westport. Sam, with the reins in Port Chester,  is creating some really amazing food. This past weekend I had the opportunity to meet up with him to talk a little about the HVRW menu and sample a few dishes he’s going to be highlighting next week. 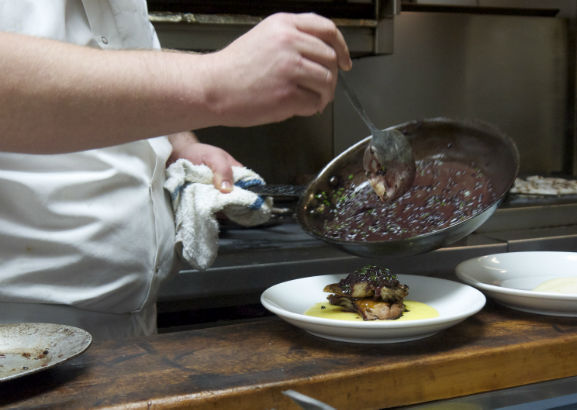 Sam takes great care in sourcing many of his ingredients from local farms. Using locally grown mushrooms and polenta he has created a vegetarian entrée: Roasted Hen of the Woods over Wild Hive Farm Polenta with a Chianti Sugo. This entrée is easily made vegan by leaving off the shaved Parmigiano cheese. The mushrooms have a rich smoky flavor imparted from the wood burning pizza oven that blend beautifully with the soft organic polenta and sweetly acidic wine reduction. I literally could not stop eating it. 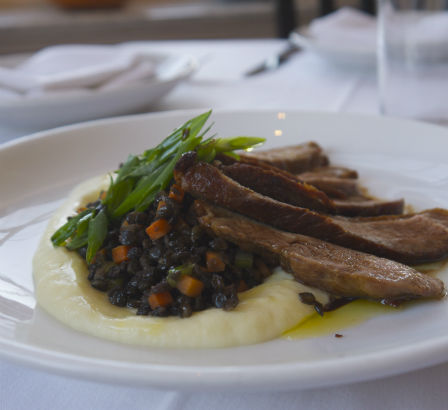 Another dish he shared with me used duck as the star. If you’ve followed me in the past I’ve mentioned that duck is a favorite of mine, but I find that it can be hit or miss in many restaurants. Either it’s over cooked and dry or undercooked with rubbery skin. Every now and then all the combinations come together and you have the perfect marriage. This is one of those times.

Their duck is sourced from the Hudson Valley and served with a beautifully crisp skin, and thinly sliced. It rests on a fragrant parsnip puree with stunning black lentils. Not only is it a beautifully composed dish, but the flavors come together like a symphony.

If you’ve never been to Tarry Lodge  in Port Chester I highly recommend you give it a try. You will find a wide array of offerings spanning from deliciously thin crust pizzas, house made pastas to rib eye steak; creative anti-pasti salads and rich cured salumis and meats. There is something of everyone on their menu.