September and October were slower months for the Westchester Breakfast Club. We found ourselves scattered many weekends, but managed to get together once a month. In September we visited Antoinette’s in Hastings and October found us heading up to the Yorktown Coach Diner. 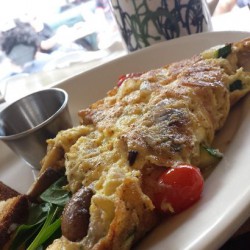 Sept. 29: We wanted a simple café meal this morning, so on the recommendation of an acquaintance, Sylvia suggested Antoinette’s in Hastings. Tucked between residential buildings on Warburton Ave., Antoinette’s is easy to overlook if you don’t know it’s there. We spotted it by the number of bicycles leaning against the front window; Antoinette’s is apparently a great refueling stop for cyclists during nicer weather. Since the space is quite small, we had to wait awhile for some of the patrons in bike gear to continue on their way and free up a table. After ordering at the front counter, we got a nice spot by the front window. Antoinette’s has the type of simple fare you’d expect from a café: omelettes, egg sandwiches, muffins, and waffles. Sylvia chose the omelette of the day and coffee, Shelley went for the croquet madame and frozen (not iced) chai latte. The coffee of the house is GiacoBean; in fact, if you Google Antoinette’s, the first result is the webpage for GiacoBean. Sylvia found the blend smooth without any burnt coffee flavor; it provided just the right jolt of caffeine to kick her day into gear. Her omelette came served with Sriracha—and now she can’t imagine having her eggs any other way! Shelley’s croquet madame was generously sized; perhaps too much so, since the fried egg extended far beyond the edges of the croissant. But it was flavorful nonetheless, with a pleasant side of Dijon mustard. The frozen chai latte was an interesting twist, but was perhaps a bit too filling along with a meal. It would be better as a standalone snack. Overall, Antoinette’s was a perfect little spot to get an affordable, easy morning meal. 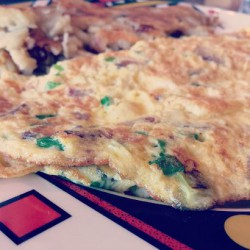 Oct. 27: At the various diners we’ve visited, we’ve found that each attempts to provide a dish all its own, something you won’t find at other diners. At Yorktown Coach, it’s Yorktown’s Favorite Omelette, which Sylvia tried. Apparently Yorktownites (Yorktownians?) love potatoes, because the town’s Favorite Omelette contains cheese, scallions, bacon, cheddar, Swiss cheese, sour cream, and…mashed potatoes. Yes, mashed potatoes in an omelette. With all the other fixings, it’s basically like ‘tater skins in omelette form. And did we mention it came served with a side of home fries? The omelette itself wasn’t too heavy; it was well-made and flavorful. But Sylvia would have much preferred a side of fruit rather than the additional starch.