People are reading
You are at:Home»Columns»Seasonal Chef: Taking a Look at Root Vegetables, Jerusalem Artichokes

It’s November, the weather has officially turned cold. Just the other day we woke up to snowflakes in the Northeast. This time of year makes me a little wistful. The leaves are all but fallen off the trees and the air has a decidedly cold bite. Even with the Fall season midway, we still get to see some interesting things pop up at the farmers market. Yes, gone are the tomatoes and peppers but now come the root vegetables; and there are so many of them. For the next few weeks I’m going to devote my Seasonal Chef posts to the pretty, and not so pretty, root vegetables. First up, we have Jerusalem artichokes. A funny name for an oddly funny shaped tuber.

Jersualem artichoke, also known as sunchokes, are related to the sunflower and produces edible tubers. It is hardy and grows readily in cold climates. Jersualem artichokes look a bit like a knobby pink-skinned ginger root. They have a sweet, nutty flavor, with a nice crunch, reminiscent of water chestnuts or jicama. They are an inexpensive and versatile ingredient that can be used both raw, roasted and pureed.

Jerusalem artichokes were first cultivated by the Native Americans. The French explorer Samuel de Champlain found them in Cape Cod in the early 1600’s and took them back to France. By the mid-1600s, the Jerusalem artichoke had become a very common ingredient in Europe and the Americas. The French in particular were especially fond of this little tuber, which reached its peak popularity at the turn of the nineteenth century. 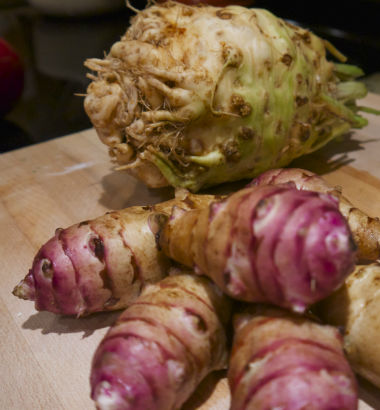 Nutritionally speaking Jerusalem artichokes are very rich in inulin, a carbohydrate linked with good intestinal health due to its prebiotic (bacteria promoting) properties. They contain vitamin C, phosphorus and potassium and are a very good source of iron. These health benefits come at a price; they can have an intestinal gas effect in some people.

Look for roots that are free from soft dark spots, wrinkles or sprouting. Knobbles are unavoidable but smoother, rounder artichokes are easier to prepare. Jerusalem artichokes will keep well for a couple of weeks in the fridge. You can cook them just like you would a potato: scrub well and leave the skin on, or off. (Leaving it on will yield maximum nutritional benefit.)

This week in my  Hilltop Hanover Farm share I was presented with two interesting root vegetables: the Jerusalem artichoke and celeriac, or celery root. (I will talk about them in another post.) So I decided to see what would come of mixing the two of them together. 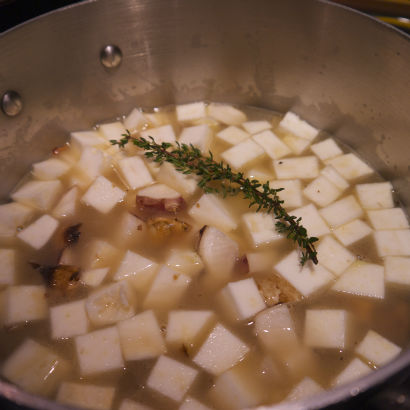 The result was a delicious soup. Click this link to see my quick and easy recipe for: Jerusalem Artichoke, Celery Root and Pomegranate Soup. The key to having the roots cook evenly is cutting them up in even same-sized small pieces.

Once finished I had a wonderful earthy soup with a great artichoke flavor. However, I sensed it needed just a little something else to balance it all out. As luck would have it, I just picked up a ruby red pomegranate at the market and gave it a try. That was the ticket! The pomegranate seeds not only balanced the soup with a burst of sweet tartness, but also gave it a very cool texture. The bright red arils looked fantastic too in the finished dish too. 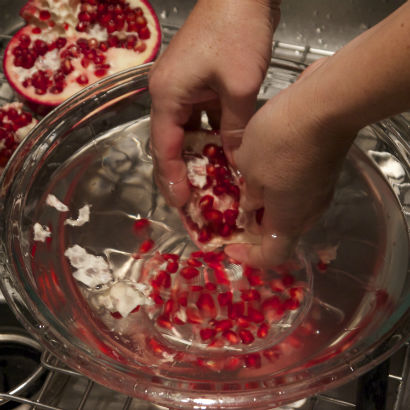 Here is a super easy way to get the arils (seeds) out from the white pulp: do it under water in a big bowl. The arils fall to the bottom and the white pulp floats to the top. 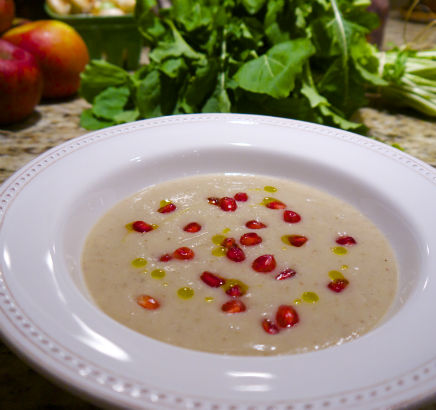 The next time you spot a sign saying Jerusalem artichokes or sunchokes, pick a few up and give them a try. Even sliced thin and added to a salad you can’t go wrong.