People are reading
You are at:Home»Restaurants»First Look»The Parlor in Dobbs Ferry: First Taste

I’ve heard there have been lines out the door for the pizza at The Parlor, David DiBari’s new restaurant in Dobbs Ferry. But I went a couple of Thursdays ago: there were plenty of open tables and it was easy to snag two seats at the bar.

The restaurant is the big sister of The Cookery’s DoughNation, the mobile pizza truck that DiBari started taking to farmers markets and festivals in Westchester last summer. He ended up getting the same oven as the centerpiece of The Parlor. 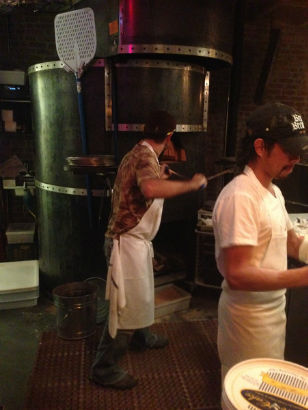 It’s nice that he’s got more than a year’s worth of experience working the oven, because the pizza is coming out just about perfect. DiBari says it’s the kind of restaurant he’s always wanted to do. But he’s always been the kind of chef who does what he wants, never mind convention, so I asked him how The Parlor is different from his first restaurant, The Cookery, especially wit the decor.

“They are both what I want to do, but the difference between this and The Cookery is that The Cookery was done out of necessity — it naturally formed itself,” he says. “We didn’t have much funds, it was me leading with my heart and getting it done using what we had to work with. I think it’s the same thing here, only I had a little more security and was really able to create something that was even more who I am, and be more expressive, while keeping the product really simple and tasty.”

The restaurant’s look and feel couldn’t be more fitting for DiBari, who has a reputation as the bad boy chef of the Lower Hudson Valley. Its stripped-down decor — a chain-link fence along the dining area, corrugated metal covered in graffiti on the walls, burlap sacks on the seat cushions — reminds me of Roberta’s in Brooklyn.

DiBari did a Facebook contest to find a street artist to do the murals, and the winner was Ryan Christianson of RC Murals. 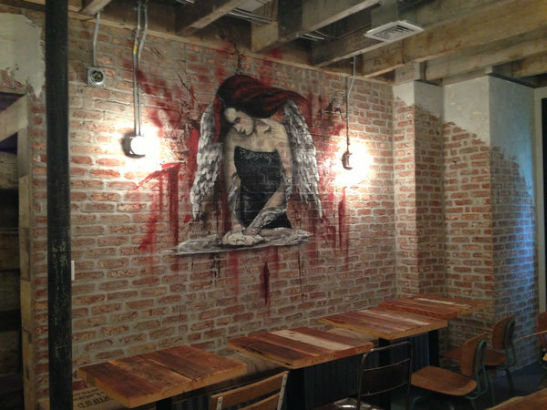 DiBari and his girlfriend, Cathy Cercena, scoured the markets at Brooklyn Flea and Brimfield to find the furniture and decor. Contractor Ivan Molomout from River Green Design Build put it all together — as much as DiBari would let him. Much of the interior was just stripped down to the bones and then left as is.

(Here are a few photos from when I stopped by during construction in September.) 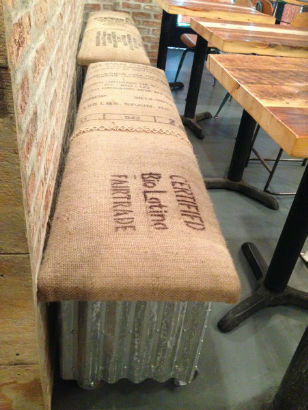 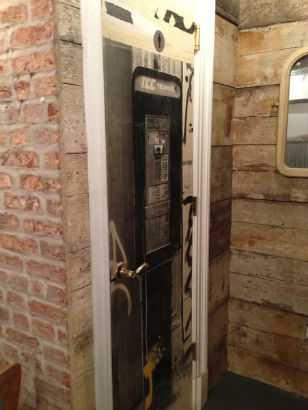 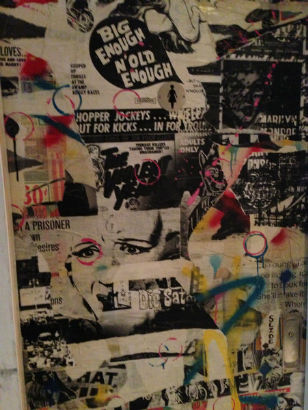 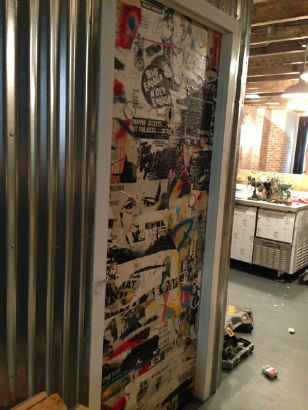 This Mother Goose wallpaper is covering a wall behind the bar. Look closely and you can see Little Miss Muffet and Little Bo Peep! 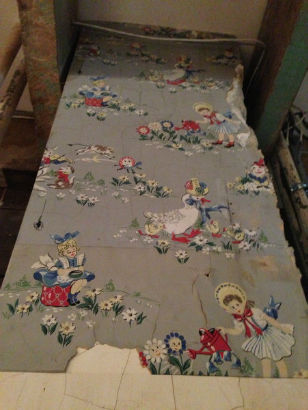 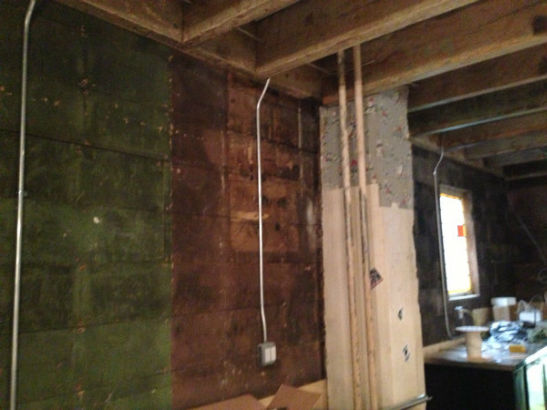 It’s all fixed up nice now, though. 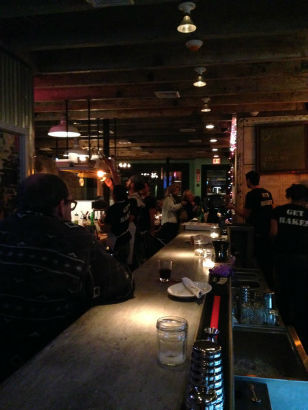 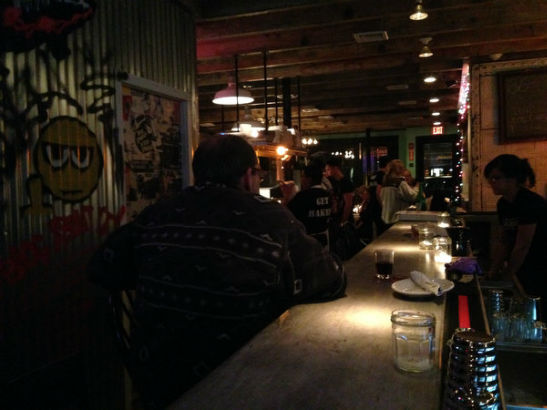 Here’s a look at our meal.

We started a couple of cocktails. I’m just happy when a cocktail list doesn’t have chocolate martinis, and so The Parlor’ selection of Manhattans, Negronis and Bee’s Kneeses was a delight. 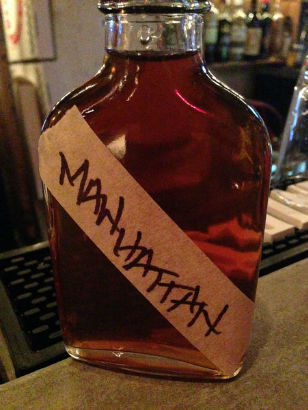 At first I thought the fact that they came in individual bottles with their names written on masking tape stripped across each was cute but a little gimmicky. But after I spoke to DiBari, I understood: he says pre-making the cocktails keeps ratios consistent.

“My biggest thing I am so sick of in any place, but my place in general, is not getting the cocktail right every time,” he says.  And he kept the list small for a reason: “When you have six great cocktails, they’re going to be great all the time.”

We tried a negroni and a Manhattan and they were both well-balanced (and potent!). 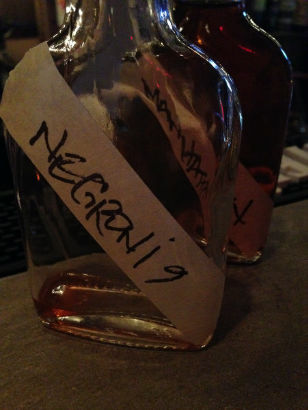 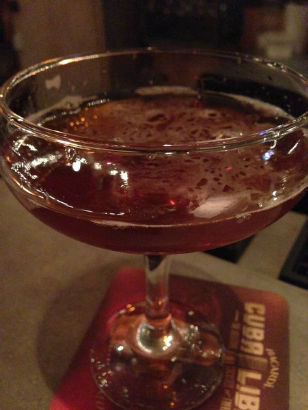 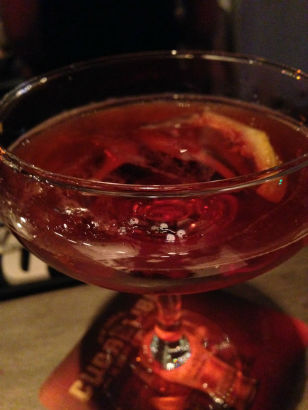 The wood-fired oysters! These were out of this world. 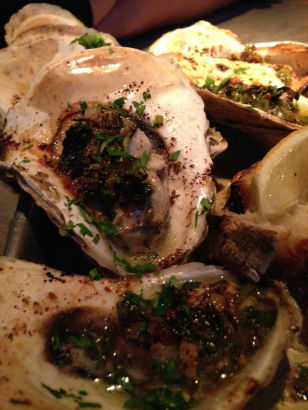 They tasted of a warm sea with brown butter and pickled parsley — bright and anise-y — scattered over their shells. 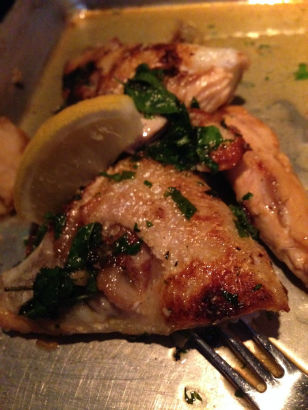 They’re rich and juicy, seasoned with Slovenian sea salt (as is every dish at the restaurant), lemon oil and oregano: Pick the bones up with your hands.

DiBari said he won’t put any more eggs on the menu, so be sure to order the Parlor Pockets: 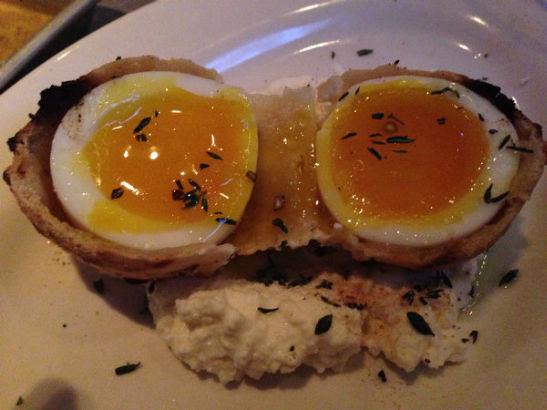 The yolk oozes out of the soft-cooked eggs, wrapped in pizza dough batter and served with house-made ricotta and few drops of truffle oil and a sprinkle of tiny leaves of thyme. 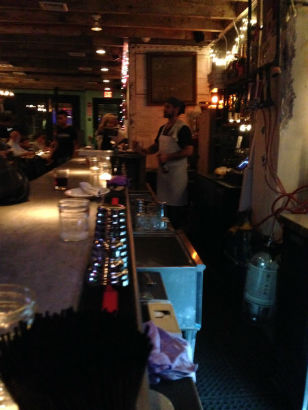 Pizzas come with shears, so you slice them yourself. We got three. Pepperoni, Fresh Greens and Bone Marrow.

DiBari makes his own pepperoni, house-smokes it and scatters it, chopped, over a pie with creamy mozzarella and house-made tomato sauce. The sausage’s spicy, heady flavor unravels in waves on your tongue. 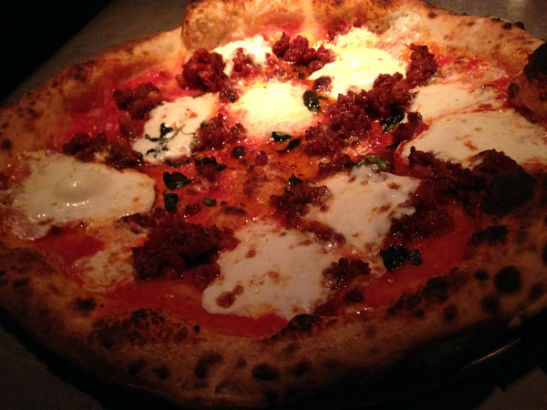 The Bone Marrow is drizzled with vin cotto, a reduced vinegar so sweet we wondered if it were jam. It’s topped with sprinkles of rosemary: 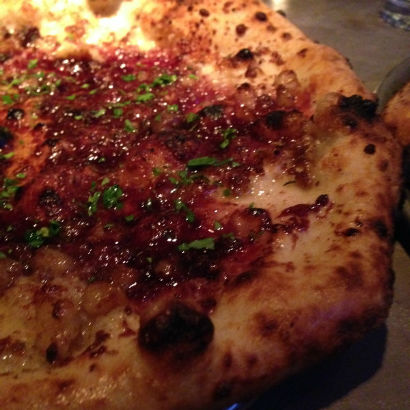 And the Bitter Greens was our favorite! 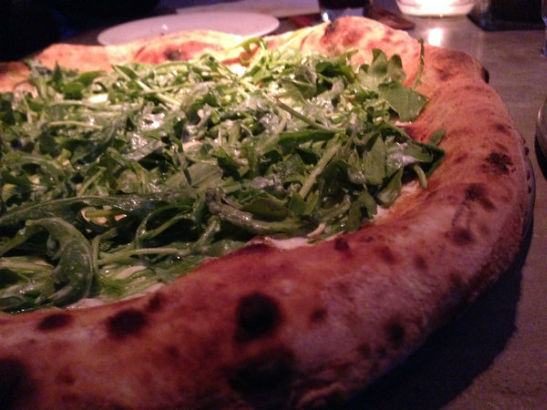 The spicy arugula is a terrific match for the garlicky, creamy mozzarella underneath.

Desserts are very sweet and lots of fun. 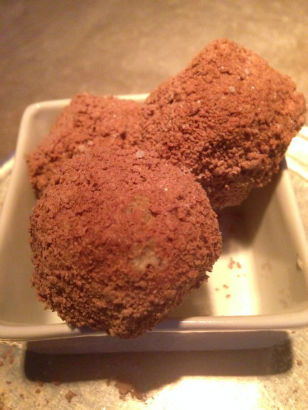 A cannoli cake roll with toasted pistachios and chocolate chips. 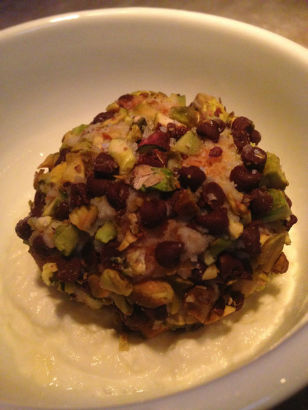 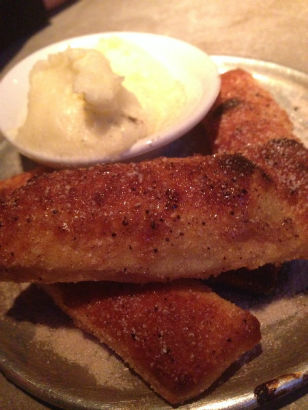 We had a ball talking with people at the bar — we made a couple new friends that night! — and just enjoying the atmsophere. 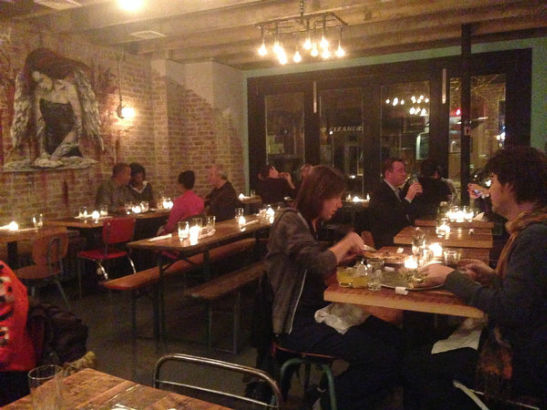 There are no beer taps, but there are craft beers in bottles like Full Sail Session Lager and Speakeasy Prohibition Ale, and American classics like a 40-ounce Colt 45 and Schaefer in a can.

The taps are reserved for wine: a prosecco, 3 reds and 2 whites, all simple selections you wouldn’t mind sipping on the porch. The wine goes great with the pizza. But then again, here, it’s hard to imagine much that wouldn’t.