People are reading
You are at:Home»Columns»Recipe: Pumpkin Chocolate Chiffon Pie

Though these past few years have turned me in to a more adventurous foodie, there’s one meal you just cannot touch – Thanksgiving. You just can’t improve on a classic.

Thanksgiving is my absolute favorite foodie holiday, made even better by the fact that I don’t have to cook for it. Instead, my mother does all the work and I just have to show up with something sweet in tow. Now, this may seem like a chump job. Dessert is low stakes on a day when the meal is such a star of the show. But I just see it as a challenge.

I’m a fan of pumpkin pie. (Like I said, I love the classics on this day.) But at the end of a big dinner, a custard-y pie is sometimes just a little too heavy. When I see a dessert menu that includes mousse ANYthing – I’m there. So when I stumbled upon a Pumpkin pie that was basically a pumpkin mousse I was all over it.

I adapted this from the November issue of Food Network Magazine and the recipe is pretty easy to follow. The other part of this is while I throw down pretty hard in the kitchen, when it comes to baking I am a sad, sad case of many failures. My patience is low! I chose to take it easy on myself and just grab a ready-made chocolate pie crust from the store, and the rest was just mixing and heating on the stove-top – MUCH more my speed. (…Although I did realize I left out the eggs RIGHT as I was ready to start sautéing, pobody’s nerfect!)

The day I made this, I chilled in the fridge to set for the minimum required three hours and it seemed to have set just fine. However, when I went for a second piece the next day, I found everything had settled event better. So if you can, this is one to whip up the day before.

Coming armed with this bad-boy to any of your holiday happenings will no doubt make you the Pumpkin King (or Queen). 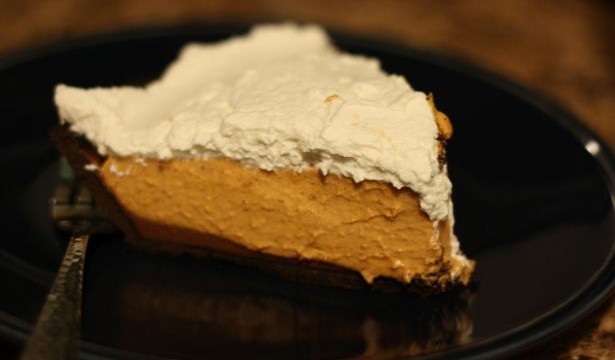 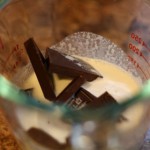 Melt the chocolate in a microwave safe bowl 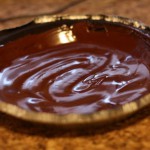 Spread on the crust 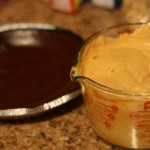 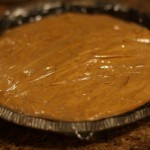 Get the plastic wrap as tight as you can