Worth Their ‘Wait’ in Gold 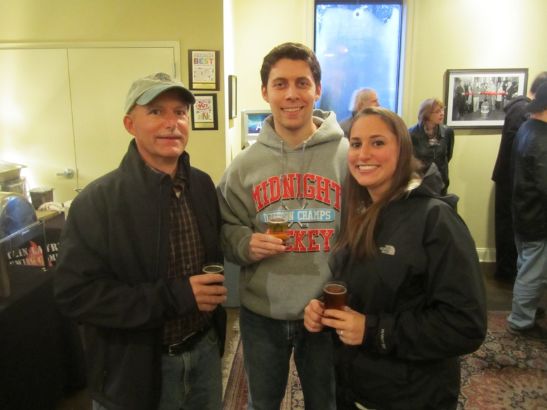 It is the biggest traffic day of the year. While the rest of the world calls it Getaway Day or Thanksgiving Eve, it is, over at Captain Lawrence, Growler Wednesday—the day when half the county, and many others from beyond Westchester limits, decide it would be great to fill up a growler or six with local craft beer for the Thanksgiving feast. They come with wagons, crates, and even a walker to transport the 64 oz. jugs, filled with Brown Ale, Liquid Gold, Winter Ale, or whatever else strikes their fancy.

Adding to the Growler Wednesday chaos at Captain Lawrence, it was also a special release—one of just a handful of days each year when a long awaited specialty bottle is made available, and people carry on a tradition dating back to the brewery’s Pleasantville days of showing up to taste the new brew, secure a few bottles, and see old friends. On November 27, the imperial stout Frost Monster was finally unleashed. 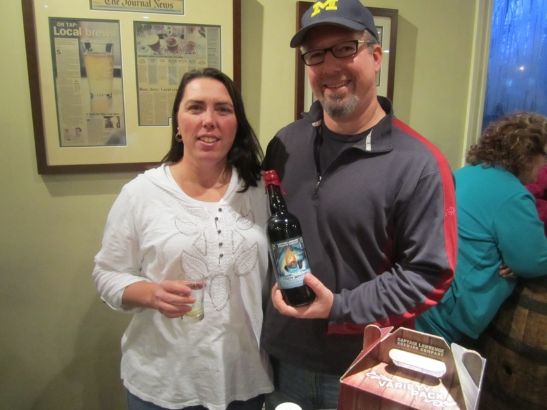 Doors opened at 4 p.m. If you had the foresight to get there a few minutes before 4, you were in and out in minutes. Arrive a few minutes after, and a simple trip to the brewery got a bit more complicated. Craig Foster (“Like the beer,” he said of his name) and fiancée Liette Lecours of Peekskill were first to score the Frost Monster, thanks to showing up in Elmsford just before opening.

They’ve been to Captain Lawrence’s special release events before, such as that for the Hops N’ Roses sour ale. “When we heard about a beer aged in rum barrels,” Craig said, “we were really curious about it.”

Liette picked up the variety pack, which includes the Frost Monster and Smoke From the Oak, for her brother’s birthday present. They were off to the Adirondacks for Thanksgiving, hauling some Triple IPA as well.

“I would put it on sweet potatoes,” said Craig.

“Just put it on everything,” suggested Liette. 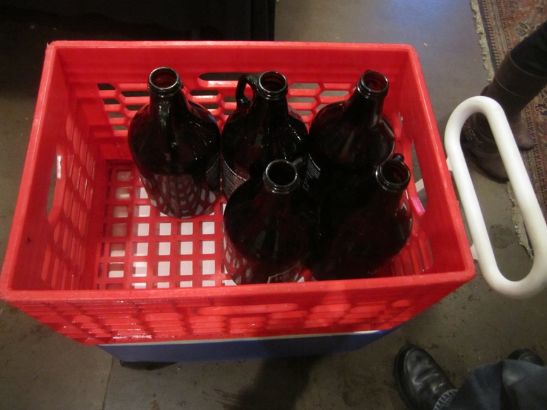 Speaking of curious Thanksgiving table creations, the Village Dog guys served up fresh turducken. The sample line was a breeze, but by 4:10, the growler line extended through the tasting room to the back door. Everyone who entered wore the same expression—they figured they were in good shape arriving not long after 4, and were shocked (and perhaps a bit dismayed) to walk in and see the line.

“I planned to be here at 3:45,” said Rick Deguisto of Thornwood, hauling a milk crate-cooler combo with 10 empty growlers. “I couldn’t make it because of work.”

He was hosting the holiday, serving Captain Lawrence—Pumpkin Ale, Brown Ale–to a crowd of about 40. Last year’s half dozen growlers didn’t quite cut it. “Every year, we run out,” he said.

The line was plodding along but Rick’s daughter Maureen said there’s nowhere Dad would rather be. “This is his favorite place,” she said. “He’s always trying to get his friends to come here.” 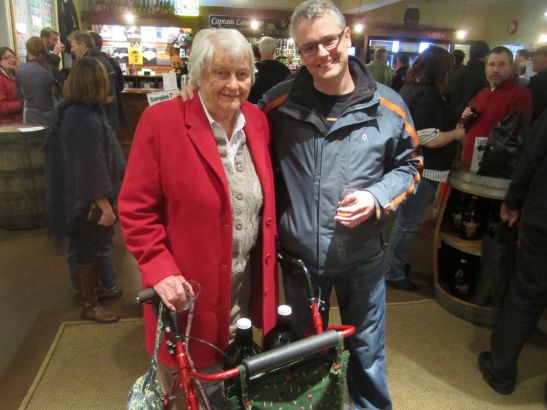 Captain Lawrence growlers are also a Thanksgiving tradition at the McClure home in Irvington, where Douglas McClure was smoking a turkey—and serving an array of CL beer that includes the small batch #69, Captain’s Reserve Imperial IPA and Brown Ale. “I brought Mom along for fun,” he said, smiling at mother Kay, of Scarborough, Maine.

“And for money,” noted Kay.

And, let’s face it, for her walker–which is stocked with a half dozen filled growlers. “I usually discourage her from bringing her walker out,” said Douglas. “But today, I said, ya know…?”

Douglas fondly recalled Growler Wednesdays back in Pleasantville, a friend’s 5-year-old son, tired of waiting for his dad on the beer line, napping on the ratty old couch in the Captain Lawrence tap room. “He’ll grow up to be quite the frat boy,” said Douglas.

By 4:30, the line was out the door and into the wet and windy Westchester air. People were taking the wait in stride, taking turns hitting the sample line for something to sip on.

Scott Jacobs of Charlotte is in town to build the new Tappan Zee bridge, and enjoying the Triple IPA in the welcoming warmth of the tasting room. “I was going to fill a growler,” he said. “I’m not waiting in that line.”

The guy knows a bit about traffic. His advice for Tappan Zee travelers? “Go in the opposite direction during peak travel times,” Scott said.

Paul Occhiogrosso of Croton scored fresh growlers of Winter Ale and Pumpkin Ale, while his pal Matt Hand of White Plains picked up the Frost Monster, at a cool $20 for a 750 ml bottle, for his brother. We’ll assume his bro appreciates the gesture. “My brother probably has the biggest IOU tab in America,” said Matt. 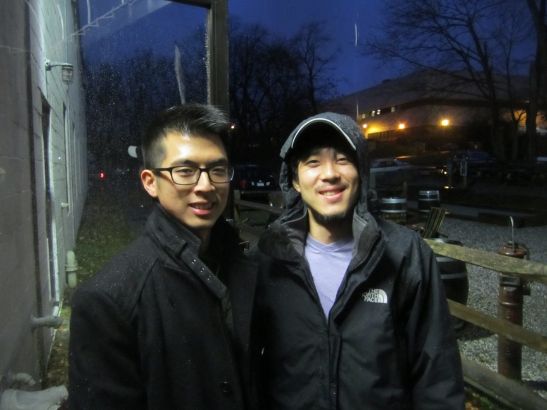 Out in the cold gray drizzle, Brian Lee of Sleepy Hollow and Andrew Fong of Brooklyn were, for the moment, the very end of the line. The caboose. New to the Captain Lawrence Growler Wednesday tradition, they weren’t complaining. “We’re going to be rewarded with beer, so it’s OK,” said Brian.

“And the beer must be good,” added Andrew, “if all these people are waiting.”