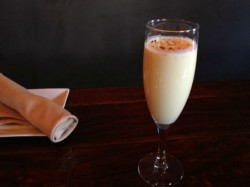 If you ask a Puerto Rican friend about coquito, you’ll probably hear something like, “Oh—my mom makes the best coquito!”

(By the way, this is not unlike the response I get when I mention lasagne to Italian-American friends!)

But back to coquito—pronounced Koh-KEE-toh—it’s a typical Christmas drink, often compared to its cousin, eggnog. I have to confess, however, that  prefer this coconut-kissed, Caribbean version of the classic holiday beverage. Typically served in small glasses, coquito is typically served cold (though it’s even great in a bit of coffee!). Also, note that like eggnog, you can serve it without rum for the non-imbibing or under-twenty-one crowd! I like to serve this as part of dessert, but I’m sure you’ll have some ideas for it as well…and, as always, I’d love to hear them!

In the meantime, ¡Buen provecho! Enjoy!

This recipe is a slight adaptation of the coquito recipe that originally appeared in my book, Calypso Coolers! Serve chilled, with or without the rum!