People are reading
You are at:Home»Cooking»Christmas»Give the Gift of Food: Ideas for Edible Holiday Gifts 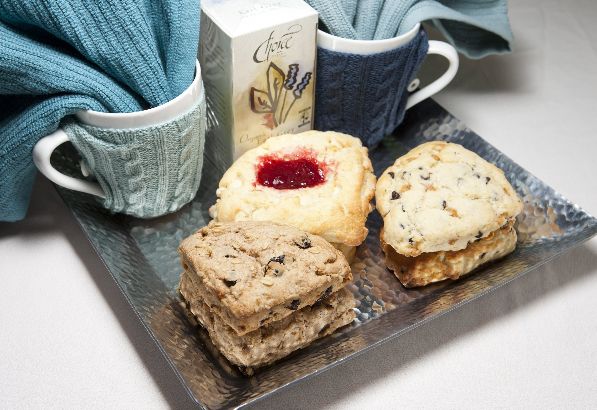 Some items are suitable for mailing; others are best presented in person, said Paul Holje, co-owner of Dakota Harvest Bakers in Grand Forks, N.D.

“Any items that don’t need to be refrigerated” are good candidates for shipping to loved ones at a distance, he said. Foods such as pies, cheesecakes, regular cakes and anything that has a sauce should not be mailed, he said.

The bakery has been called on by customers to prepare items such as cookies, breads and scones to send as gifts. “We wrap large cookies in individual bags and, for little cookies, we put six to a bag,” he said, to make a nice presentation and to protect them from breakage. 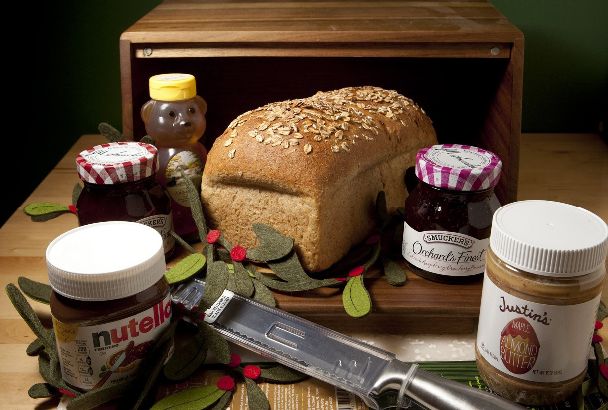 Customers can order gift baskets loaded with tempting baked goods from the bakery, Holje said, but they could try “building” one themselves. He suggests thinking in terms of “themes.”

For example, “you could take a bread basket and add a cutting board, a bread knife, fancy jams, local honeys and almond butters to get them started on the path to good breads.”

Most people don’t have bread boxes in their homes, but such items conjure up warm memories of days past, he said. A wooden bread box is available for as little as $20, although they can cost as much as $100.

As a guest in friends’ homes, he’s noticed that many times people don’t have a reliable wine bottle opener or they struggle to cut bread for lack of a good bread knife — both are items that would likely be appreciated as part of a themed gift, he said.

For the tea lover, fill a basket with boxes of the person’s favorite teas, some scones and a teapot or a pretty teacup set, he said. This could be custom-made as a large or a smaller gift — but cute either way.

The coffee-lovers on your gift list would enjoy a basket filled with a bag of specialty coffee beans and a grinder, a French coffee press, cookies and a tin to hold the beans.

Restaurant supply stores, such as Culinex in Grand Forks, are good sources for high quality kitchen items — pans, skillets and utensils — at reasonable prices, he said. “You can get a good bread knife for $20 to $30,” usually less than you find at department or specialty stores.”

For those looking for less expensive options, especially for gift-giving at a distance, take a Mason jar and fill it with layers of dry ingredients needed for a batch of soup, Holje said. “You could add a nice pot with a (serving) spoon” and a recipe card to top it off.

“The theme is what you’re after,” he said. “You’re not cooking it, but you’re getting them prepared to.”

Similarly, all the ingredients for scones — except the butter and milk — “are not costly,” he said. “It’s just the time it takes to put it all together,” he said. A container of your favorite homemade hot cocoa mix could be given along with a couple of nice mugs, he said.

To give the gift of a delicious breakfast, he recommended a six-pack of pint-size Mason jars, each one filled with oatmeal and dried fruits, raisins, chocolate chips or anything else that enhances it.

Liquid is added and the cereal is eaten right out of the jar. “It’s an adaptation of instant oatmeal” from packets, he said, but it’s a gourmet version. Recipes for different flavors can be found by Googling “overnight oatmeal,” said Holje, who describes himself as an avid follower of food and kitchen blogs.

For gifts that will travel, consider ditching the paper or bubble-wrap, he said. “Instead wrap the gift in tea towels or use the towels as stuffing” around the gift items.

“Give them something useful” instead of filler that will be thrown out.

The traditional holiday standby, fruitcake also ships well, Ferguson said. “Ours is the good fruitcake, though, not the bad kind.”

What qualifies it as “good,” he said, is “booze and time.”

A massive mix of chopped nuts and dried fruits are blended with brandy, covered and left untouched for a month, he said. After it’s mixed with batter and baked, each loaf is doused with more brandy which acts as a preservative.

Holje advises customers to mail their gifts early in the week.

“Send them on Monday or Tuesday, not Thursday or Friday, so they don’t end up sitting in a post office over the weekend.”

The charm of homemade baked goods and food-centered themed gifts, he said, is that they are “different and memorable.”

The gift of an experience “is best,” he said. “There’s no clutter after it’s done. No one needs more stuff.”

Print
Overnight Oats in a Jar