People are reading
You are at:Home»Columns»I Eat Plants»I Eat Plants: Five More Reasons To Go Vegan in the New Year

January 1st marks 10 years of the veg life for me.  Three years vegetarian, seven vegan.  It was a personal decision that reflected where I was in my life at the time, and I’ve never regretted it.  Last year I gave you five reasons to go vegan in the new year, and now I’m giving you five more!

5.  Because there are tons and tons of vegan cookbooks out there to help you make delicious food!

Our very own former I Eat Plants columnist, JL Fields, made her debut as a published book author this year!  With books like Vegan For Her, which gives a comprehensive look at women’s health issues and needs along with veganism, complete with recipes by our JL, you are in good hands for learning all kinds vegan cuisine, from decadent to healthy fare!

4.  Because Beyonce is doing it.

And of course, Jay-Z.

They might only be doing it for a short time, but if the Queen Bey is doing something like going vegan, can’t we say in all fairness that it’s gone pretty mainstream?

There has been criticism about their 22-day plan, and it’s not without merit- especially that going vegan for a short time won’t solve all the woes of the earth and the animal agriculture industry.  While I don’t expect that doing so for a short time will fix everything, what is it going to harm?

When I was in college, I participated in vegetarian awareness week.  Yes, it was just a week, but it was easy.  Easier than I thought it would be.  That is part of why a few years later I was able to commit to going vegetarian.   Fast forward another couple of years, and I tried a 3-week stint at being vegan.  It took me a few tries before I got there, but these short term commitments were instrumental in getting to where I am now.

Every journey starts with just one step.

A small study released last year showed lower levels of stress and improved mood after just two weeks of restricting meat.  It’s way too small of a sample to draw conclusions, but why not try it out for a couple of weeks and see how you feel?

If you want to make sure you’re getting the proper nutrition while trying, I highly recommend the blog The Vegan RD, as well as the books Vegan for Her (mentioned above) and Vegan for Life.

2.   Because you want to be more compassionate.

But to whom are you being compassionate?

Which leads me to…

Has there ever been something you want to do very much, but it’s never felt like the right time? 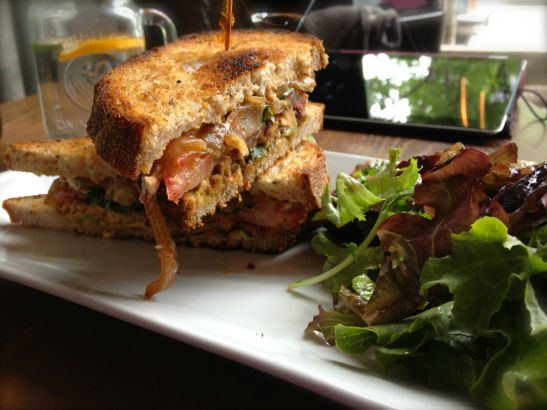 You too deserve to be vegan… and to eat a sandwich like this one I had while on vacation to the Pacific Northwest this year.  Sandwich from Plum Bistro in Seattle, WA.

Happy New Year everyone, and be safe and healthy!