People are reading
You are at:Home»Cooking»Christmas»5 Fabulous Christmas Cocktails

Ready to raise a glass to the holiday season? Consider shaking up one of these fabulous Christmas cocktails, all concocted by creative mixologists in our region. Cheers! 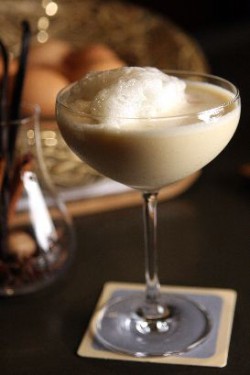 One of our favorites from years past at Blue Hill at Stone Barns. Philippe Gouze, the general manager there, is adept behind the bar. For his take on egg nog, he uses Zirbenz Schnapps, a stone pine liqueur of the alps, which is made from wild pine fruit there, and Ragged Mountain Rum, which is distilled in the Berkshires. It’s a subtle and delicate drink. “Not too strong,” says Gouze. “With a scent like you just spent the whole day in the forest snowshoeing.”

Make it: First, make a creme anglaise by bringing 2 1/2 cups milk to a boil. Scrape the inside of a vanilla bean into it, and add 1/2 teaspoon nutmeg and 1/2 teaspoon cinnamon. Let steep at least an hour and as long as overnight. Bring back to a boil. In a bowl, whisk 4 egg yolks with 1/3 cup sugar and slowly incorporate the hot milk. Put the mixture back on the stove, stirring constantly until thick. Let cool.

To make the Berkshire Pine, whisk 2 egg whites until frothy. Add 2 scoops of the whites and ice to a cocktail shaker and shake with 4 ounces creme anglaise, 2 ounces Zirbenz Schnapps and 1 1/2 ounces Ragged Mountain Rum. Strain into a coupe glass and garnish with a scoop of egg whites and a few drops of Zirbenz Schnapps.

Get it: It’s no longer on the menu, but you can find other delicious wintery drinks at Blue Hill at Stone Barns, 630 Bedford Road, Pocantico Hills. 914-366-9600, bluehillfarm.com. 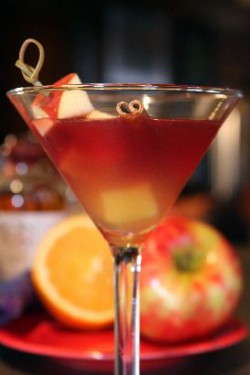 Ben O’Connell has been shaking drinks at Red Hat since it was just a tiny bistro on Main Street in Irvington. Now the restaurant has become Red Hat on the River, a converted old warehouse with vaulted ceilings and sweeping views of the Hudson — and O’Connell has become its general manager. He still likes to use local ingredients, and this cocktail is no exception. When you slowly pour the wine in at the end, it floats to the top and makes a sort of “red hat” on the drink.

Make it: First, make a cinnamon-infused brown sugar simple syrup by combining equal parts of brown sugar and water in a small pot. Cook until sugar is completely melted and remove from the heat. Immediately add 1 cinnamon stick to mixture and let rest for at least 6 hours. Hold in a glass container until you are ready to mix cocktail.

Add ice to a cocktail shaker. Add 2 ounces Tuthilltown Spirits Hudson River Rum, 2 ounces Hudson Valley apple cider, 1 ounce of cinnamon-infused brown sugar syrup and a splash of freshly squeezed orange juice. Shake and strain into a chilled cocktail glass. Slowly pour 1 ounce of red wine in along the rim, and watch as it rises to the top of the drink. Garnish with 3 apple chunks and 1 cinnamon stick. 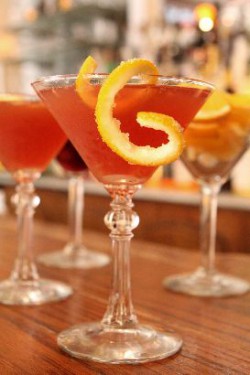 Andrew Barrett, bartender at Hudson House of Nyack, says he named this drink by playing off Jack Daniels and winter’s cold weather. Plus, after you dredge the long orange twist with sugar, it looks like an icicle perched on the rim of the cocktail glass. You’ll need Griotte cherries — French sour cherry packed in Kirsch, and you can find them online or at gourmet grocers. Fee Brothers bitters are available online, too.

Make it: Use the cutting edge of a zester to peel a long orange twist from an orange, turning the fruit as you cut the circumference. Moisten it with water then dredge in sugar. Set aside.

Muddle 4 to 5 Griotte cherries and 2 orange wedges in the bottom of cocktail shaker until they’re mashed but not completely pulverized. Add ice, 3 ounces Jack Daniels, 1/2 ounce sweet vermouth, a dash of Angostura bitters and a dash of Fee Brothers West Indian Orange bitters. Shake vigorously and strain into a chilled cocktail glass. Garnish with the orange twist. 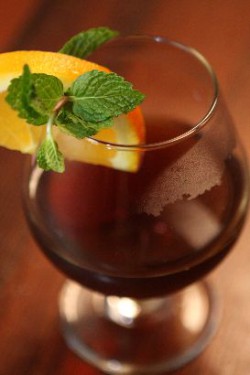 Anthony Colasacco, owner of Pour Cafe & Wine Bar, likes his mint juleps so much that he decided that instead of saving them just for Derby Day, he’d take them straight into the holiday season. To make the drink a little more festive, he adds steaming peppermint tea, which warms the soul at the same time it soothes it. 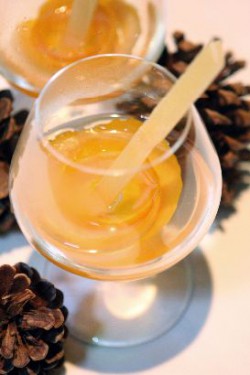 Union owner Paolo Feitera loves the shock to the senses that this warming winter toddy gives when it first comes off the heat. Don’t hold it to your nose right away or you’ll get a burn! But let it mellow out and you’ll find yourself with a great fireside sipper.

Make it: First, make an orange rose. Using a paring knife, begin at the top of the orange and work your way down in a circular motion, keeping the orange peel in one long strip. Peel 2 to 4 oranges this way.

To make El Matador, heat 1 teaspoon granulated cane sugar and 2 ounces cachaca together in a small sauce pan until it just comes to a boil. Pour into a snifter glass. Garnish with the orange rose and a sugar cane stick.