Resolution in the Air 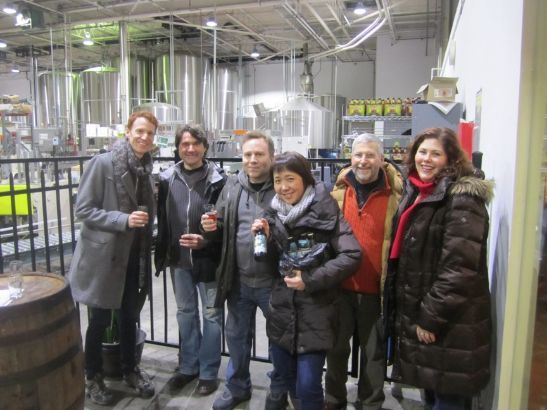 It is the time of year when our new year’s resolutions, not quite a week old, are—for the most part—very much intact. Yet we all might learn something from the denizens of Captain Lawrence’s tasting room, where the most popular resolution is, on a lazy and gray Sunday, drink more beer—and make it dark, rich, delicious, and locally brewed.

Adam Bushnoe of White Plains and Christina Forst of Manhattan are in training mode—training for a strong performance at Oktoberfest in Munich next fall. Marking their first time at Captain Lawrence, Adam is having the Schwarzer Hund, the clean and crisp German black lager on tap in the tasting room. “We got into German beers—we’re on kind of a kick,” explains Adam.

Christina enjoys the Kolsch, but finds a flaw in their preparation for Bavaria. “This is the wrong size glass,” she says, her sample vessel a drop in the bucket compared to those massive steins served under the bier tents.

Next up for their training routine is Adam’s birthday, which they’ll celebrate at either the Hofbrau Bierhaus or Reichenbach Hall in midtown Manhattan. 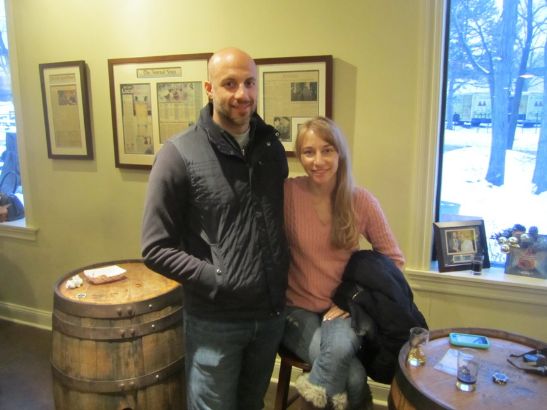 Across the room, Kim O’Brien is experiencing new things, such as the Frost Monster imperial stout. She and Michael Norelli, both of Pleasantville, are bellying up to the bar for a few samples. Kim describes the Monster as “comfort food” amidst these unforgiving winter days. “I like dark stuff, especially in the winter months,” she says. 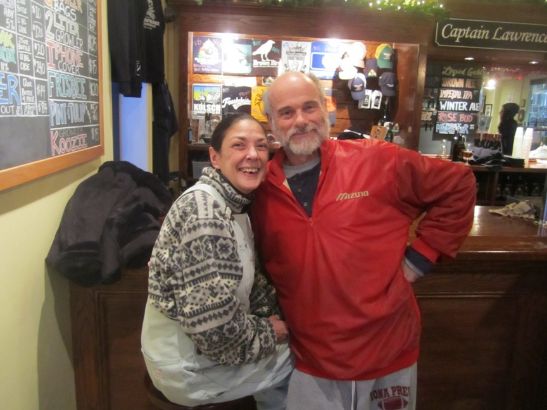 Michael, drinking the citra-hopped Rose Bud pale ale, recalls visiting Captain Lawrence in the early days, camping out for the special releases, and scoring a few #1 tickets over the years as a reward for being first on line. “To me, those were the days,” he says. “It’s been a love affair ever since.”

A schoolteacher, Michael has a special connection to owner Scott Vaccaro—he taught Scott’s siblings at John Jay High School in Cross River. His resolution? More fresh, novel, open-minded approaches to teaching, and coaching, his students. “I try to remember that children are children,” he sagely notes.

Kim’s resolutions? “No,” she says, sipping her Frost Monster happily.

Elsewhere in the room are John and Joanne Flynn of White Plains. John’s resolution is, simply put, drink more beer. “It’s easier to try to do more of something than say you’ll do less of something,” he reasons. Like many in the tasting room, he’s digging the Frost Monster. “It’s like raisins,” says John. “I don’t normally like sweet beers, but I love this.”

As was noted in our Christmas 2012 poem, Joanne adores the Smoked Porter, but has opted for a sample of the Pale Ale today. Yet the porter is well represented in their party—a five-gallon keg of the dark stuff rests at her feet. She insists it’s mostly for cooking purposes: “Stew, pork, meatballs–we marinate everything,” Joanne says. “A lot of people cook with wine, but I think beer has better flavor.”

Her resolution is similar to her husband’s: Drink more beer. No wonder they’re still pals after nearly 30 years of marriage. “I just agree on everything,” says John. “It’s easier to just join the Honey Do club.”

In the fenced-in pen alongside the brewing operation, band members from Westchester Broadway Theatre, a few doors down on Clearbrook Road, are unwinding in between productions of “White Christmas”, which runs through January 12. Trombonist Jason Ingram of Weehawken enjoys the–you guessed it–Frost Monster. “I like dark beers,” he says. “I like this better than Guinness.”

Musical director/conductor Andrew Smithson and pal Franca Vercelloni, both of Astoria, sip the Rose Bud pale ale. Violinist Mioi Takeda likes the Frost Monster so much she bought the four-pack. “The bitterness, the darkness, the very strong alcohol level,” she explains, insisting she’s up for the evening show after a few samples.

Trumpeter John Trombetta of Brooklyn teases bassist Jordan Jancz of Bridgeport about his next gig at the theater after January 12: “Titanic.” “You’re going down with the ship,” he says.

They laugh. They sip. Franca, an actress and musician who gives “White Christmas” an enthusiastic thumbs-up, changes her resolutions on the fly. “I always say, lose weight,” she says. “But…be happy. Just be happy. Drink beer, stay happy.”