Crossing the Border to Order Some Porter 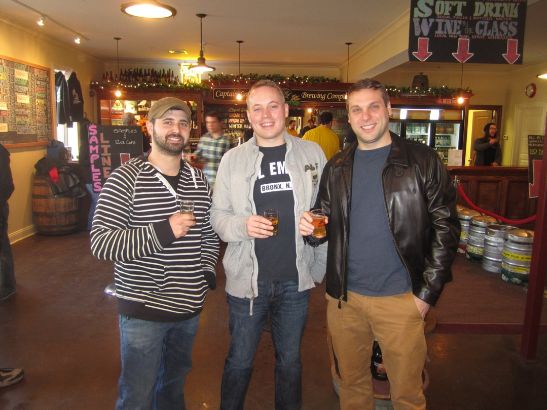 It being a holiday weekend and all, Sunday was more like a Saturday in the Captain Lawrence tasting room. “Triple D” was in the house—it’s a “birthday weekend” for Dan Gannon of Stamford, and he’s sharing a few samples with pals Dane Nardi of New Fairfield (“New and improved,” he says of his hometown) and Dana Myjak of Stamford. (Yes, Dan, Dane and Dana. It gets confusing. Work with us here.)

Dan’s wish for his 29th birthday—“my last 20s birthday ever,” he says wistfully–was visiting the brewery with his pals.

The guys are “working our way down the list,” they say. Dane digs the Imperial IPA, Dan the Smoked Porter and Dana the Liquid Gold.

Birthday boy Dan is dropping some serious hints that his pals should buy him a four-pack, or two, of the Frost Monster for his birthday. The imperial stout will go well, he says, with a bit of a hangover tomorrow. While Dan is nursing his aches, Dane plans to spend the free day snowboarding, and Dana will be hiking. 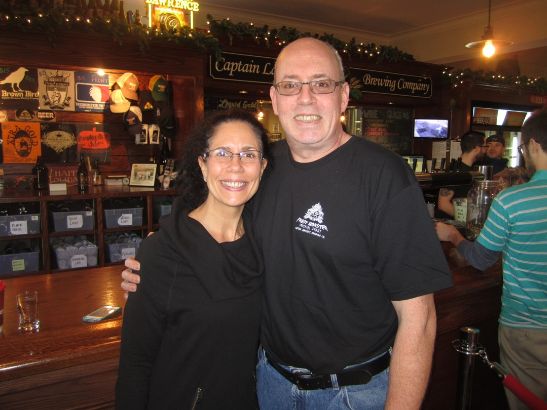 Speaking of brewed awakenings, if we can borrow a phrase from beer writer Joshua Bernstein, Steve and Cheryl Noye of Eastchester credit Captain Lawrence for turning them on to good beer—or, in Cheryl’s case, beer period. She used to drink none whatsoever, while Steve was partial to Budweiser—until a pal brought them to Captain Lawrence’s original spot in Pleasantville. They quickly became regulars.

“It wasn’t just the beer,” says Steve. “We became friends with the people there.”

“The atmosphere, the ambience,” Cheryl adds. “So many nice people, so many different beers.”

She’s enjoying the Smoked Porter, while Steve makes a complete about-face from the so-called King of Beers for a Frost Monster. “For him not to drink Bud is huge,” says Cheryl.

Arcade Fire plays from the house system. Mary Kate of Village Dog cooks up an enticing batch of pulled pork. The menu’s newest additional, German-style pretzel sticks with mustard, has sold out posthaste. “I think it might be a big hit,” says MK. 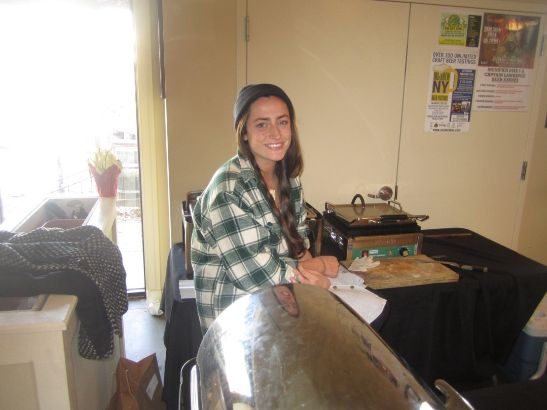 Speaking of Village Dogs, Valerie Baker of Manhattan is in Westchester to watch a pair of 100-pound yellow labs, Boomer and Alexander, at her folks’ place in Valhalla. She’s brought along fiancé Brian Donaghy of Edinburgh, Scotland. “It’s a five minute drive to the brewery,” he says. “It’d be a sin not to come.”

Brian will run the New York City Half Marathon later this winter before returning to Scotland. For the moment, he’s digging the Marvin the Marzën small-batch amber lager. (Finding the umlaut on my keyboard was not easy. I hope you appreciate it.)

“He’s getting his practice in,” says Valerie.

Also up from the City are Mackenzie Shivers and Derby Thomas of Queens, and Ross Vedder of the East Village. Ross bears a passing resemblance to a certain gravelly voiced Vedder from the Pacific Northwest. “I’ve got the hair,” he says. “I’ve got the beard.”

Like Dan–or was it Dana…or Dane?—Derby is enjoying an extended birthday season. His special day was January 4, but no one was around to celebrate then. So he conscripted his pals to trek to Captain Lawrence. 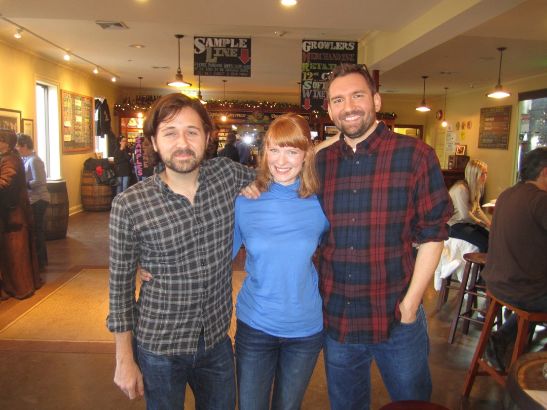 “We love to go to breweries for friends’ birthdays,” says Mackenzie. “Captain Lawrence is my favorite—so easy to get to and I love the beer.”

She’s digging the Smoked Porter, a popular choice for this chilly, gray day. Derby and Ross are nipping at the Freshchester Pale Ale. “I get more hoppy as I go on,” says Derby.

They’re figuring out how to best enjoy Martin Luther King Day. “Every year I say I’m going to do something, and I squander it,” says Ross. “Maybe I’ll come back here.”

Alas, the Captain is closed Mondays.

To be sure, not everyone has the holiday off. The hearty beer-loving Noyes, for example—he works in hardware, she at Blythedale Children’s Hospital, and both expect to be toiling on Monday. They’re making most of the free time until then.

“If you want to play,” says Steve sagely, “you have to work.”