People are reading
You are at:Home»Restaurants»First Look»The Inn at Pound Ridge by Jean-Georges: First Look

The first answer is yes. You should go to the Inn at Pound Ridge by Jean-Georges. That is, if you can get in. A reservation at the restaurant, owned by celebrity chef Jean-Georges Vongerichten, is the hottest ticket in Westchester since Blue Hill at Stone Barns opened in 2004. 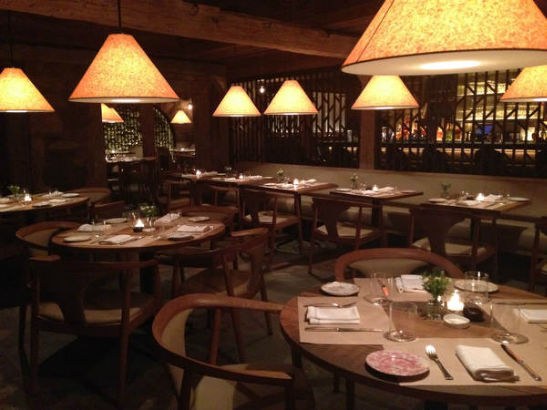 The downstairs dining room, which was not open the evening I went, but all lit with beautiful candles anyway.

The second answer: very good. The food is beautifully presented, and the flavors shine with signature Jean-Georges magic: a little heat, a little sweet, a little acidity, a little umami. The chef is Blake Farrar, who formerly cooked in Jean-Georges’ restaurant The Mark in Manhattan. 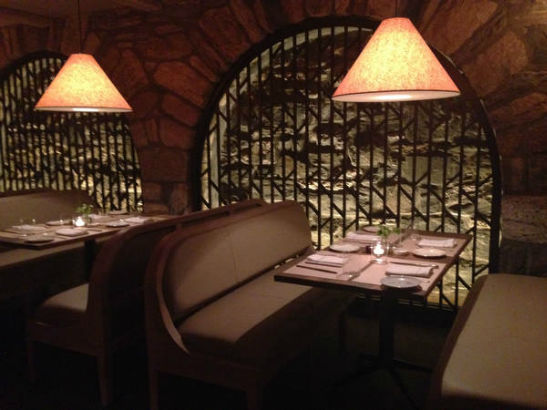 The third answer: gorgeous. The renovations of the building, a former inn and restaurant dating from 1833, will leave you slack-jawed. A big white-brick fireplace is the centerpiece of the dining room. The decor is mid-century-modern (elegant wood tables and chairs), vintage (mismatched silver and linens) and farmhouse chic (reclaimed barn wood, exposed beams), all rolled into one. 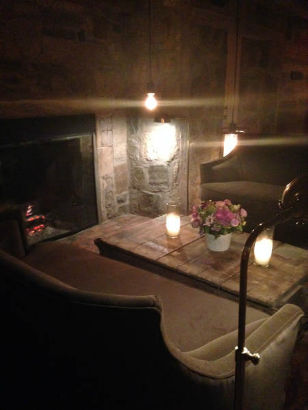 The fourth answer: it won’t break the bank — unless you want it to. Entrees range from $25 to $38. If you’re there for a celebration, you can spend $300 on a bottle of wine. If you’re there on a Tuesday, you can get an appetizer and a pizza and be out of there for under $50. 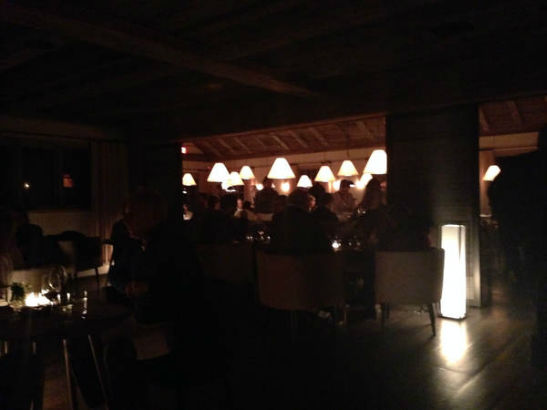 Food writer Megan McCaffrey and I had a reservation for opening night, but because of the snowstorm, we decided to change it to Wednesday. It meant we missed Martha Stewart and Richard Gere, but lucked in to a sighting of Ryan Reynolds and Blake Lively.

It also means the restaurant had one more day to work out kinks. Besides a little technical difficulty with the check at the bar and the extra salt on our fries, we didn’t notice many.

Because we changed our reservation at the last minute, we could only get in at 5 p.m. (I think I was the first customer at the restaurant!) We ordered drinks at the bar while the staff scurried around, getting the dining room ready for the evening. 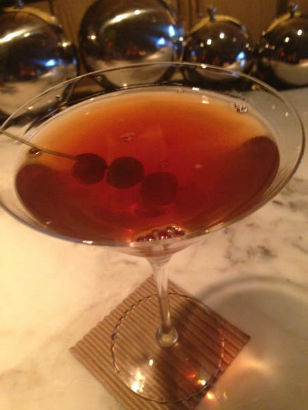 The bar is small — about 10 seats — and there are 10 or so tables in the lounge alongside it. 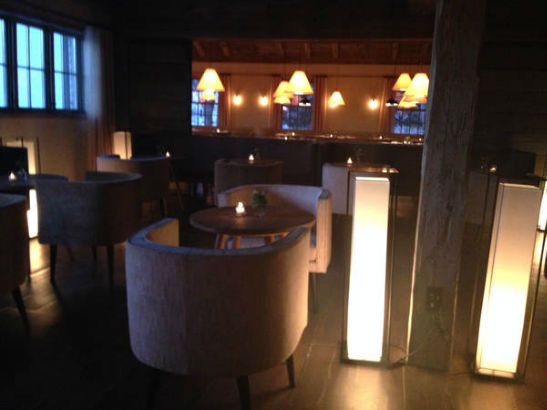 Tables in the lounge.

The lounge and dining room are separated by a banquette (for both). The dining room has a soaring ceiling, but feels cozy nonetheless. 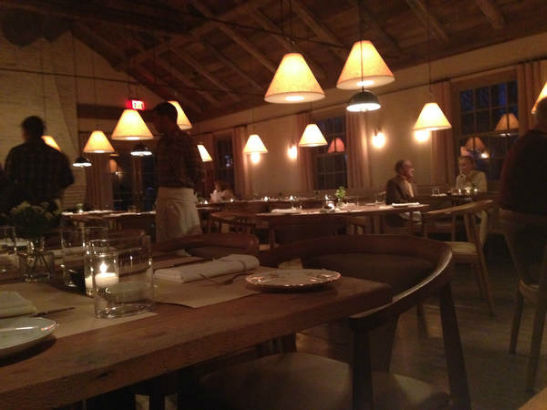 This is not a review, just our first impressions of a restaurant on its second night open to the public. But here’s a look at the food. It was all terrific, though a couple of dishes were heavy handed on the salt.

Our first dish was the Peekytoe Crab Crostini with Garlic Aioli ($14). It came on a rye toast, considerately cut into four pieces, which made it easy to share. Sweet and buttery, and just as good as when I had it at ABC Kitchen. 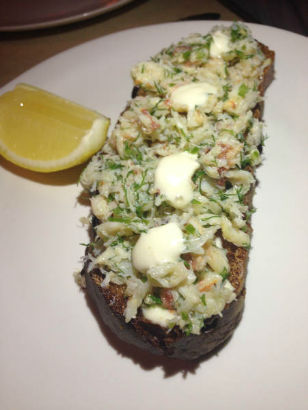 We also shared the Tuna Tartar, Avocado, Radish and Soy-Ginger Sauce ($15). This JG signature has been copied on menus all over the world, and when you try it, you know why. It sings with flavor. 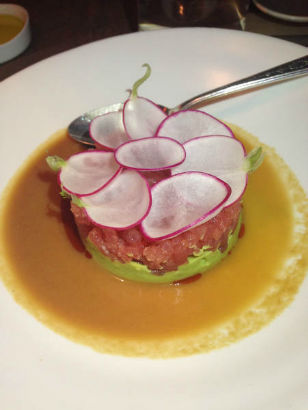 Crackling Calamari, Yuzu Dipping Sauce and Sesame ($14). Like the airiest, lightest tempura you’ve tasted. The yuzu sauce was a foam, and its delicate little bubbles melted away as you dipped. 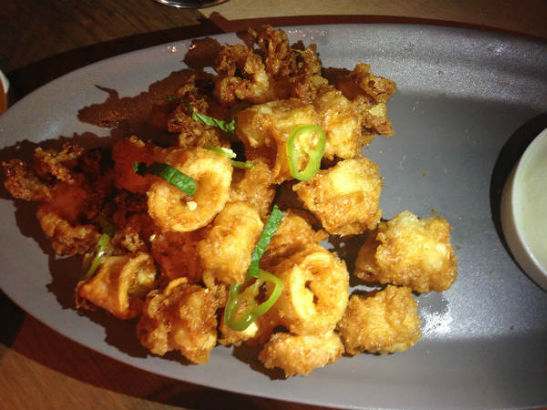 We went with the chicken and the burger as entrees, considering we’d had all fish for appetizers.

The chicken was one of the over-salted dishes, but the chicken — breast and thigh, which was confit — was juicy. The earthy salsify was a highlight. The lemon-basil sauce was assertive in its acidity. 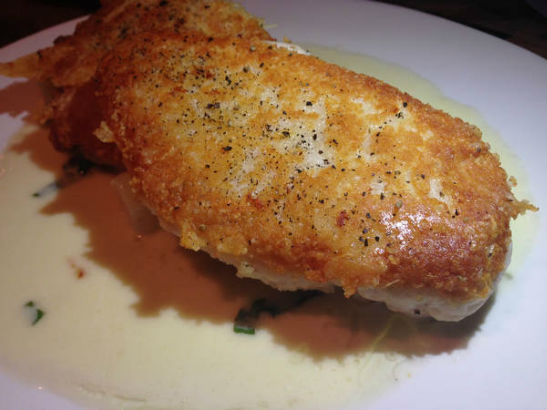 The burger had a soft bun and good beefy flavor, and was cooked as asked. The yuzu pickles were fantastic. 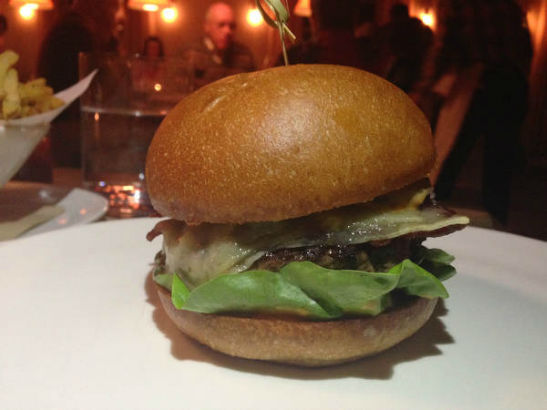 The fries were perfectly cooked: crisp on the inside and puffy on the inside, and we loved the little needles of rosemary tossed along with them. But these were so salty that we could not finish them. 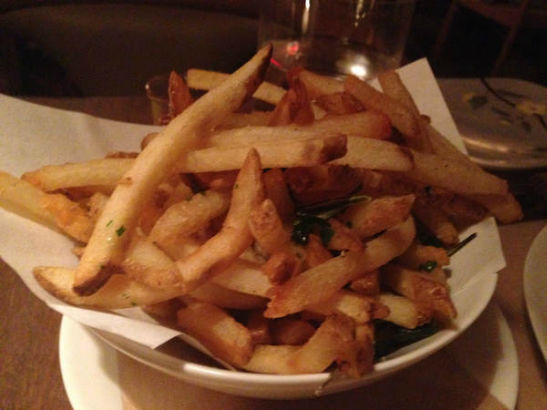 We drank two wines by the glass: a (sort of) local Chardonnay from The Vineyard at Strawberry Ridge, Ascot Reserve 2010, Warren, Conn. ($14), which was good but lacking structure. And a Brut Rose, Quarts Reef NV, Methode Traditional, Central Otago, NZ ($17), a surprisingly fun sparkler that went with everything.

For dessert we had the almond cake with poached pear and a creme fraiche and the salty caramel sundae with peanuts and popcorn. 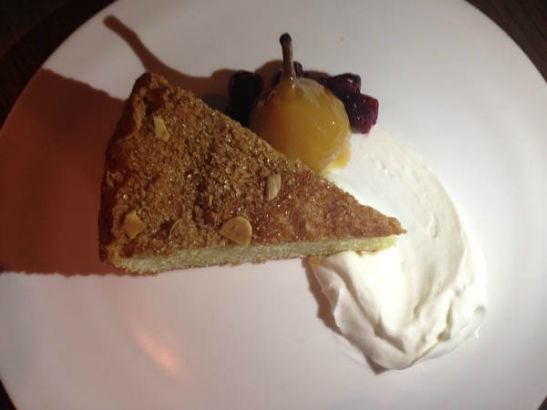 The cake was very nice — and not too sweet, which was good because the sundae clings to your teeth. In a good way. 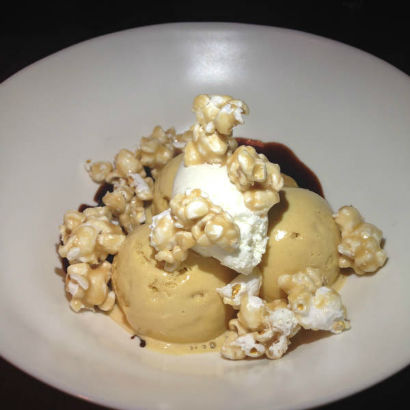 I’ve had this sundae at ABC Kitchen, and when I heard Melody Farrar, the pastry chef there, was on her way up to Pound Ridge, I hoped and hoped she’d bring the sundae along. I’m so glad she did. It’s a welcome addition to the neighborhood.

And so is The Inn at Pound Ridge by Jean-Georges.

Here are photos of the menu at The Inn at Pound Ridge by Jean-Georges. I’ll update them with PDFs soon. 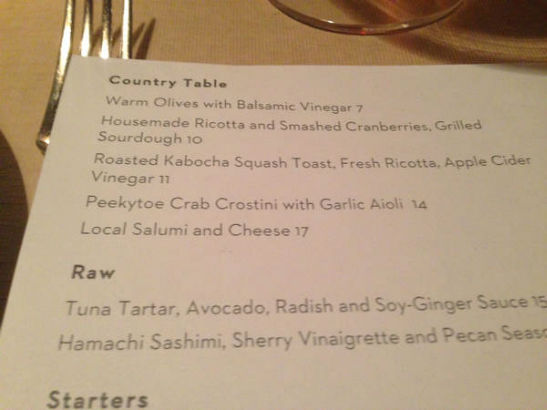 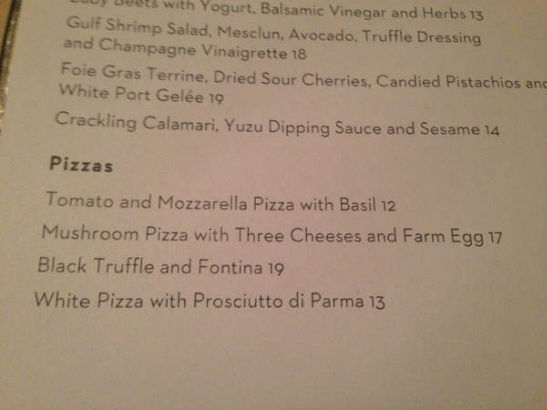 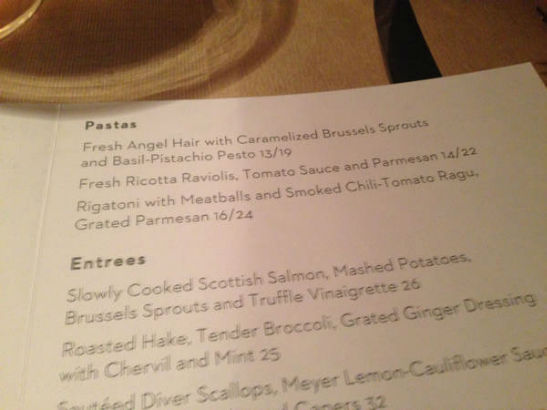 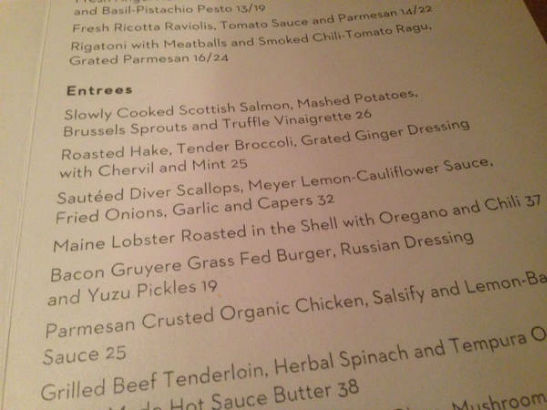 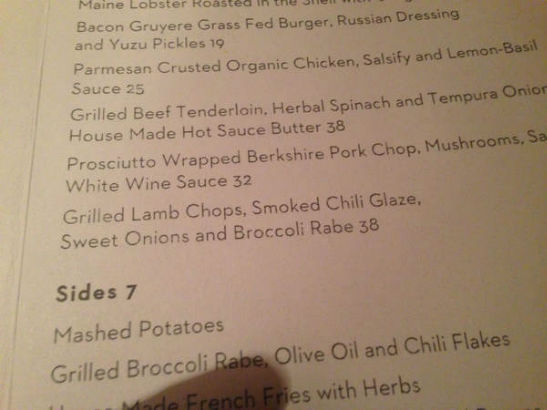 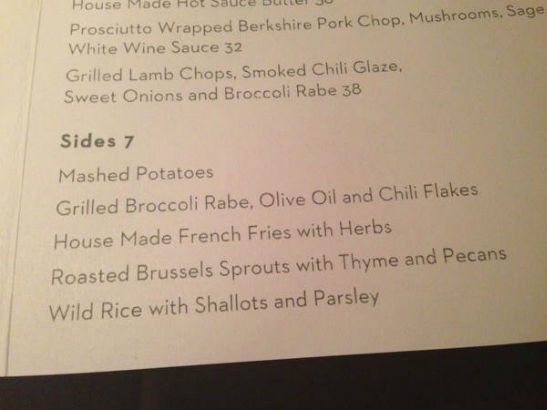 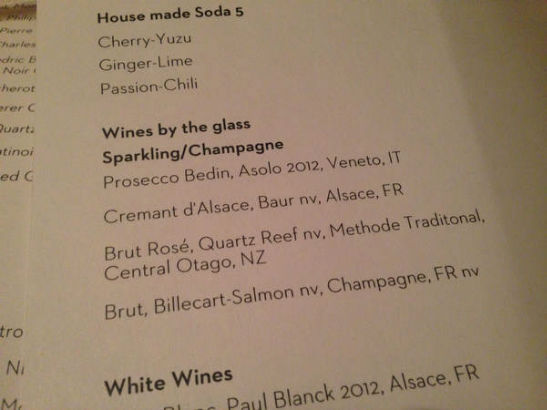 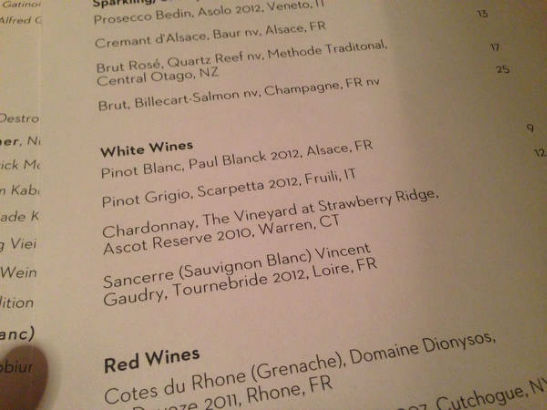 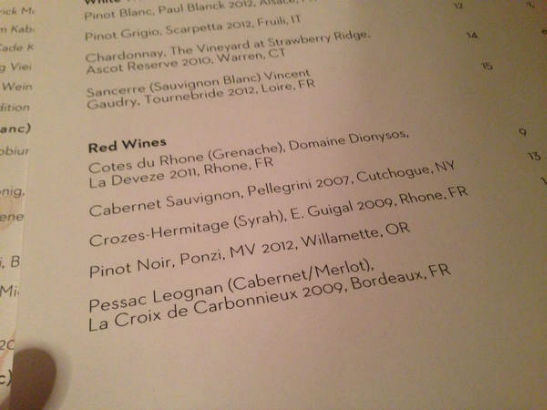