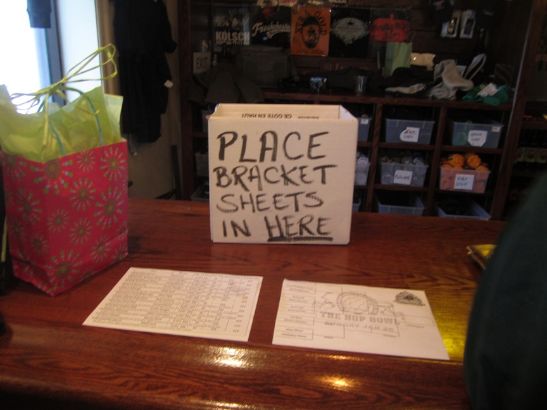 The big game was still a week away, but the contest was on at Captain Lawrence, with a dozen small-batch brews battling for the taproom title. The competition was set up more like a March Madness bracket, but the Hop Bowl was just the right thing for that dull Sunday between NFL playoffs and the Super Bowl.

The tasting room is packed on yet another polar vortexian, punch-to-the-solar-plexian day, people sampling and casting votes for their favorite staffer-brewed “pilot system” beers: The zesty Snicklefritz Pilsner, the herbal Johnny Bravo IPA, malty Young Wolfington Brown, lemony Limerance, among many others.

Blake Bryan of Mount Vernon saw the Hop Bowl announcement on Facebook and grabbed pal Monika Acton of Mahopac and dog Tyson (a boxer, naturally) for the day. “You get to try all these great beers at once,” he says. “They’ll never have all these together again.” 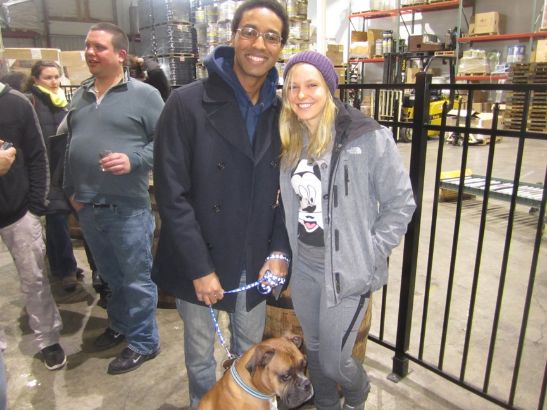 Blake hasn’t voted yet, but is leaning toward Matt Levy’s King Zythos Saison, an American spin on a Belgian style beer, named for the citrusy Zythos hops. “It’s like a mix of an IPA and saison,” says Blake. “It’s got a kick to it, but it’s very smooth.”

Monika’s leaning towards voting for the Monkey Madness, Mike Counehan’s amber-colored concoction with a rather peculiar fruit added in late in the boil. “The mango drew me in,” she says.

And Tyson, the best behaved boxer in the brewery? “He’d vote for all of them,” says Monika. “He loves beer.”

The Monkey Madness has some serious support in the room; a batch of Counehan’s pals, including Tiffany Rodriguez of Mount Vernon and Chris Leonardi of Ardsley, are here, casting votes for the mango brew. “We came out to support Mike,” says Chris. 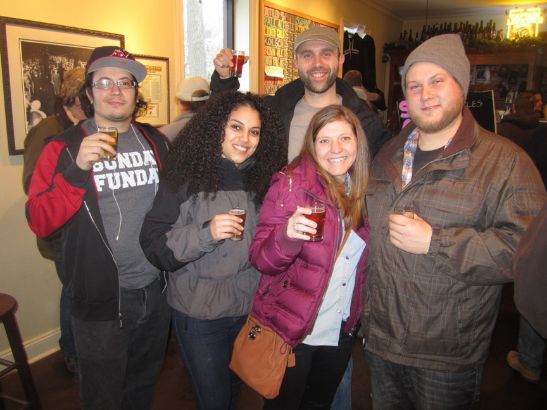 As the voting continues, it looks like a two horse race between Rob Catalano’s Knifey Moloko milk stout and RIPA’s Revenge, Levy’s imperial red rye IPA, which was hatched after his Matt the RIPA won the previous small-batch showdown last year. “The RIPA’s Revenge is like a Killian’s but a lot better,” says Michael Norelli of Pleasantville, star of “Notes No. 90” with wife Kim O’Brien. “But the Knifey is like no other.”

Dan Giannantonio of Eastchester was in the brewery the week before for his birthday, and decided to come back for the Hop Bowl. He’s voting for Ryan Kipp’s Schwarzer Hund black lager. “I normally don’t like dark beers, but this is really good,” he says. “It’s complex and not too sweet.”

If they’re not talking about which beer is going to win the Hop Bowl, the tasting room denizens are talking about which team will win next Sunday. Blake Bryan says the Seahawks, because Peyton Manning can’t throw in that New Jersey winter wind. Monika likes the Broncos because Peyton is “a good guy.” Dan Giannantonio too likes the Broncos, because “a good offense beats a good defense.” Michael Norelli calls Peyton “the Derek Jeter of football” for his classy ways. “He’s the kind of guy you like to root for,” Michael says.

Kim O’Brien swears us to secrecy regarding her Secret Super Bowl Snack; it’s a shrimp pastry, and that’s all we’re allowed to say. 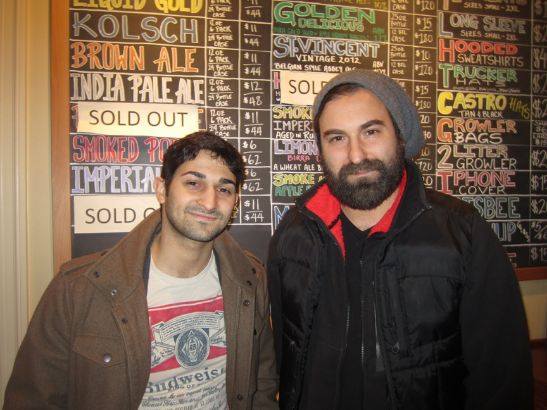 Back to the beer. Asim Hakanjin of Greenburgh is walking around with the world’s biggest smile. He says he’s come twice to Captain Lawrence before, only to find it closed. The day he finally gets in, it’s a veritable Hopapalooza, a hopping Hopstock. “I’ve been not so lucky sometimes, but I walk in today and it’s a madhouse,” he says. “It just happens to be the best day ever.”

He’s with brother in law Ahmed Omerhodzic of Buffalo. Ahmed is quite pleased with the Number Sixty Nine dark brown ale. “I could probably drink a hundred of these,” he says.

Asim votes for Doug Roberts’ Sixty Nine too. “It’d be nice to sit on a brown leather couch, by the fire, chilling with your buddies with some of this,” he says before growing wistful. “But I’ll never have it again!”

He may be right. Because when the votes are tallied, RIPA’s Revenge takes third place, Monkey Madness grabs second, and the Knifey Moloko, with 45 votes, is the runaway Hop Bowl winner. “Bring it back!” went the cheers. “Bring it back!” 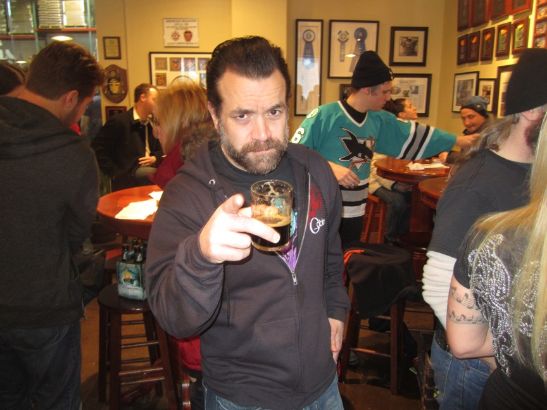 Rob C. says there were times he never thought the coffee bean-infused milk stout, taking its name from the ultraviolence-inducing cocktail in the book version of A Clockwork Orange, would be drinkable, much less a fan favorite. He credits Matt Levy for pitching in to help make the brew truly stand out.

Rob’s reward—actually, all of our reward—is a rebrewing of the Knifey: a little creamier in the body this time, he says, and a slightly higher alcohol level.

How will Rob celebrate the win? “I’m going to Disney World,” he says like a true Super Bowl champion. “Actually, Disneyland,” he clarifies. “It’s not warm enough in Florida.”