People are reading
You are at:Home»Baking»Seasonal Chef: Chick Pea Snack

This powerful little bean goes by many names: garbanzo, ceci and channa; it’s most popular name however is chick pea. It’s a legume found in many cultures and present in a whole host of dishes. Chick peas are one of the earliest cultivated legumes dating back to the Neolithic period. By the Bronze Age, they were known in Italy and Greece and eaten in savory and sweet  dishes. The chick pea is a very versatile ingredient, and must be cooked before eating. In it’s whole form chick peas can be eaten either cold in salads, or warm in soups and stews. Pureed they can be shaped in balls and fried as falafel or ground into a flour to make you can make a dish called Cecina. Fried or baked they make a delicious chick pea snack as well.

One of the most popular ways to enjoy chick peas is in a dish called hummus; which is actually the Arabic word for chick pea. To make hummus you puree them into a paste and mix it with tahini and lemon. The result is a delicious and healthy snack to go with raw veggies or chips. By the end of the 20th century, hummus emerged as part of the American culinary fabric, consumed on a regularly in most homes.

Chick peas can be found in two forms: dry and cooked. Dry chick peas need to be soaked for 12–24 hours before cooking, and then boiled for about 2 hours. The easier approach is to purchase them canned. Chickpeas are a source of 10 different vitamins; thiamin and B6, two of the B vitamins that help you convert food into energy. They also provide fiber, protein, folate, vitamins E, K, A and C. They have zero cholesterol and are low in fat and sodium. How can you go wrong?

I recently created a recipe and video using chick peas in addition to the cecina recipe above: Grilled Eggplant, Chick Pea and Feta Salad. My fellow Small Bites blogger Rinku Bhattacharya has lots of ideas for chick peas on her column as well.

If you google “chick peas” you will find pages and pages of links. I wanted to do something a little different this week, making them into a snack. I got the idea from my recent Nature Box snack order. Included in this month’s selection was a chick pea snack with a citrus chipotle flavor. I thought I would give it the old college try and see if I could do something interesting. About 12 cans later I think I figured it out.

Let me say that this is a dish you can find loads and loads of spice blend ideas on line. I’m not reinventing any wheel on this one, but what I can give you (12 cans later!) are a few tips to make your chick pea snack successful. 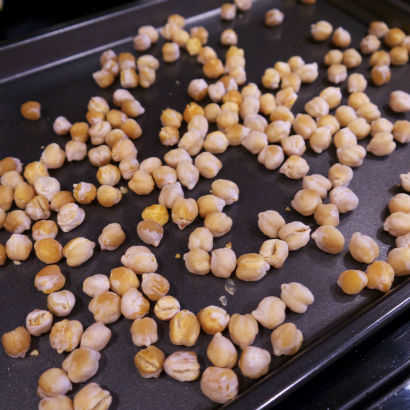 After a very good rinse you need to lay them out on a rimmed sheet tray, over paper towels and pat them dry. Ideally you should leave them out over night on the counter to completely dry. This step will yield a nice crunchy pea. Then mix with your favorite spice blend and canola oil. That’s it!

Bake at 375 degrees for about 30-40 minutes, cool and you are done. Literally the only “active” time you have is opening the can, rinsing them and then mixing the spices.

Now, if you just simply can’t wait and need a chick pea snack fix right away, you can do all this shortly after removing from the can. They never seemed to get completely crunchy, but they sure tasted yummy!

Before I started this experiment I gave my spice pal Lindsay a call from Spice Revolution and she dropped a few of her blends in the mail to me. The Japanese Seven Spice, made with orange peel, black and white toasted sesame, nori, Szechuan pepper, cayenne and ginger was insanely delicious. As was her spicy Jerk Blend. My favorite however was her Cinnamon Blend, made with Ceylon, Saigon cinnamon, clove and ginger. That was the bomb! If you are out and about on Saturday check her out at the Gossetts Farmers Market, in South Salem.

On Friday morning I’m going to be heading back to my favorite radio show Orlando in the Morning, WFAS 1230 AM, in the 8:00 hour, with my latest creation. I had such a great time last week when I took my Spicy Vegetarian Chili, and spent some time chatting with them in the studio.

Click this link to see my Chick Pea Snack recipe, and I hope you will give it a try. It’s a fun dish to do for yourself, or with the kids. The best part: it’s easy and so good for you!