Maybe it’s this crazy weather, or maybe it’s the fact that life has just starting going so quickly that it’s hard to keep up. But, whatever the reason, it seems that comfort foods are what  many of us crave most these days. Recently I’ve been thinking more and more about Peruvian-themed cuisine… And that brings me to today’s recipe: Ají de Gallina. 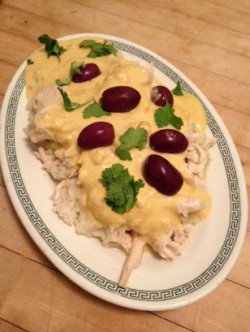 It was definitely in Peru where I first tried this dish.  I was staying at my friend Cynthia’s in Lima, and I remember that—like so many other first-time flavors I was sampling—this was really tasty. But the big difference with this one was that there was an additional comfort element: saltines! (Which, by the way, is always under debate: many people will tell you you must use bread instead of Saltines!) Like many dishes, Peruvian Peppered Chicken varies from casa to casa; every family has their own slightly different version despite almost identical components.

I first documented the recipe when I was working on Viva la Vida with Chef Rafael Palomino (ah, way back in 2002!).  Since then, I’ve made it on several occasions, and always with great results (happy customers!).

This home-style Peruvian dish is quite different from many others that hail from there; it’s a chicken/rice based dish, topped with a creamy pepper sauce (that can be turned up or down!). Hearty, warm, and cozy, this dish is perfect on chilly days, and perfect for larger crowds (simply double amounts!).  ¡Buen provecho! Enjoy!

This recipe, one I learned many years ago in Peru, is adapted from Viva la Vida, by Rafael Palomino and Arlen Gargagliano ©2002