Wishing Away the Winter Woes 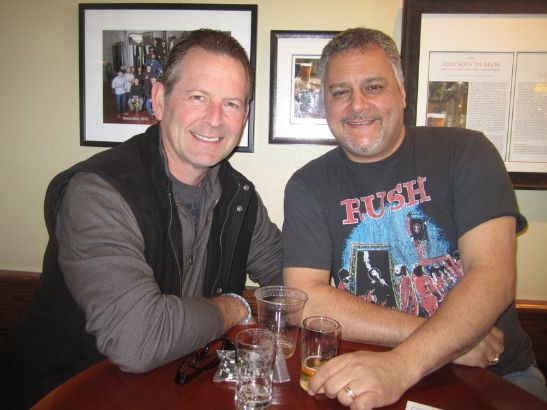 Even if it doesn’t prove to be the statistically worst in Westchester history, it sure as hell feels that way. Nasty, unforgiving, relentless—pick your adjective. Or your simile: “It’s like a boxer with a good jab,” likens Rob Walpole of Hawthorne as he sips a small-batch ‘IP’Session India Pale Ale. “You circle it, looking for an opening, and he gets you with the trip-hammer jab. Next thing you know–eight more inches of snow.”

Yet today, the boxer is resting. The sun is out and it’s close to 50. I brought Rob along for a reason—he was part of our beer tasting, wise cracking panel when “Notes” convened at a local block party in sun-splashed August, and we’re all cashing in those fond summer memories to get us through to spring.

Plus, he’s handy with the metaphors. 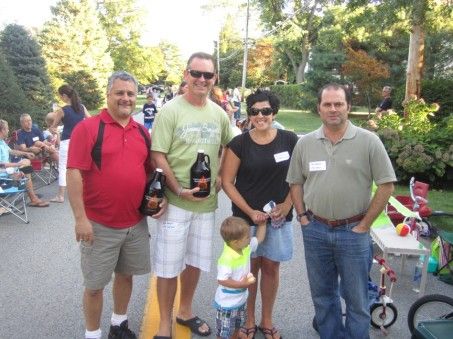 It was summer once.

Also part of the block party posse—Donnie Maldonado of Hawthorne, who’s thinking of warmer times with a Kolsch in hand. Don is philosophical about the weather. “We had a mild winter last year, so we can’t complain much,” he says. “If the pattern holds, we should be good for two years.”

Sundays in the tasting room are typically mellow but—while there’s still a good eight inches of snow covering the bocce court–the warmth has clearly brought people out of hibernation. They nurse shoveling injuries with tasty craft brews. They see old friends. They put off the dull weekend chores for a week or two.

Sal Damiata of South Windsor, Connecticut and Tim Phelps of Torrington (birthplace of sweet and condensed milk, Tim notes) are halfway through a one-day rolling beer extravaganza: A stop at new Mamaroneck mega-beer store Half Time (“Overwhelming,” they both say, but in a good way), a few samples of ale at Captain Lawrence, and then a pop-in to beer and grocery mecca DeCicco’s in Brewster. Members of the Krausen Commandos homebrew club, Sal and Tim walked out of a would-be lunch at Nat’s Pub in Elmsford, just before arriving at the brewery, after glimpsing the uninspired tap lineup. 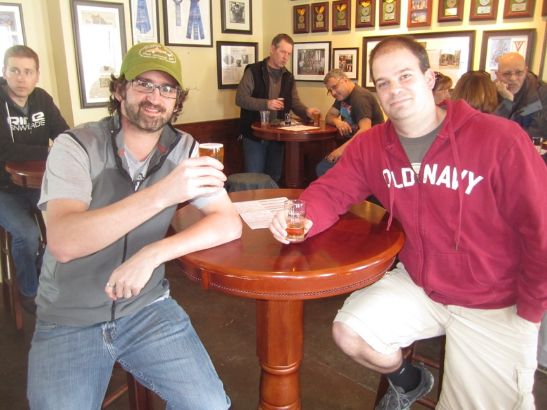 The gents are taking winter’s challenges in stride. “We live in New England,” says Tim. “It still sucks, but we’re used to it.”

Tim had been to the old Captain Lawrence site in Pleasantville, and Sal had not. Both are new to the 444 Saw Mill River Road spot. They think warm thoughts as they sip cold beer. “He’s wearing shorts and I’ve got a t-shirt on,” says Tim. “Our actions speak volumes.”

Dressed to the nines, on the other hand, are Harley Friedman of Chappaqua and Jim McElwain of Greenwich. They’d partaken in a shiva for a friend’s father, and figured they looked too sharp to simply go home. The guys are enjoying the malty Belgian-style ale Amber Rush, downing a rib sandwich from Village Dog, and enjoying the spring teaser. 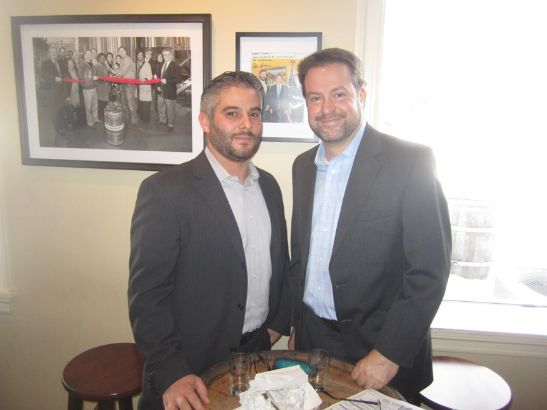 The tasting room is filling up. Sublime’s offbeat grooves on the house stereo keep things loose. Block party vets Rob and Don are on to RIPA the Black, a funky rye IPA. “Porterish—is that a word?” says Rob. “Tastes a little like coffee beans.” Don finds the pilot-system offering, hopped with citra, columbus, and centennial strains, “Guinness-y, with a spicy aftertaste.”

Don has coped with the winter by sparking up a fire and popping open a Raging Bitch IPA. Rob keeps a Captain Lawrence IPA or two stuck in the snow alongside the driveway while he shovels. We talk about block parties past, present, future—barbecues, beers, beach chairs–and if Rob (guitar) and Don (vocals) will reprise that impromptu Beatles set they did after dark a few years ago. 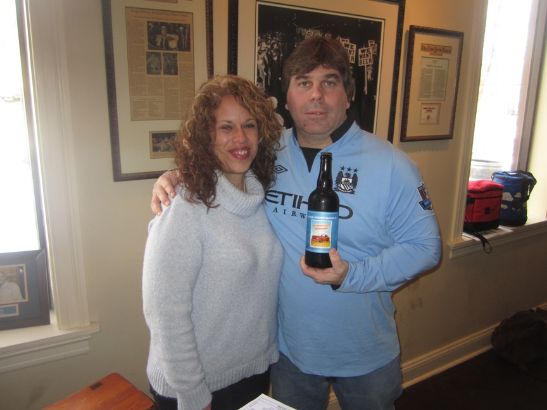 The sun has prompted Brian and Yvette Kelly of Wallkill to make the trip to Captain Lawrence. Yvette surprised her husband with a birthday brewery visit in October, and they’d been waiting for the right day to use up the rest of their chips. He has a cup of RIPA the Black, and a big bottle of St. Vincent’s abbey ale to bring home. She sips wine.

“We saw that Sunday looked great,” Brian says with a smile. “It warmed up and we came down—and it was well worth it.”