Hudson Valley Restaurant Week Spring 2014 (HVRW) is almost here. I for one am very excited. Recently I stopped at Beehive in Armonk, NY to preview their menu offerings for HVRW, and had a chance to meet Valerie Ladis and Dean Modroukas, sibling co-owners of Beehive. I blogged them last year about this time for HVRW Spring 2013, but really did not get a chance to meet the team behind this Armonk mainstay. 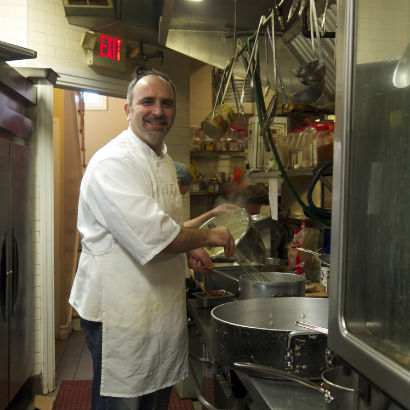 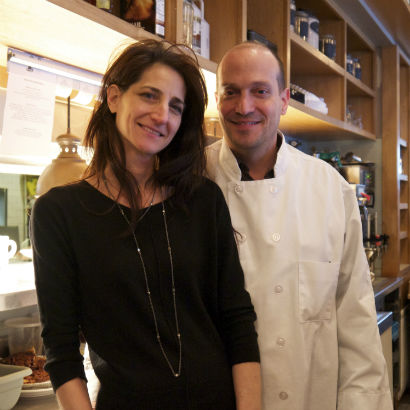 Beehive is truly a family affair. Their father Peter is the Executive Chef and can be found right along side Dean (pictured above) in the kitchen. Their mother Anne runs the front of the house along with Valerie (pictured above), who also creates their delicious desserts. Valerie’s husband Peter (pictured above) serves as expeditor and bartender in the evenings.  As we chatted about food and being Greek, which I also am, I instantly felt a connection to them and what they have created in their beautiful restaurant. Beehive  is cozy and comfortable, just like an old friend’s house. 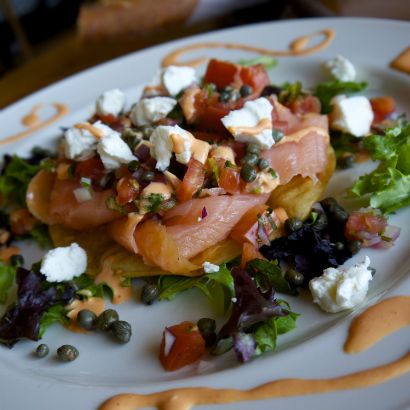 The first dish Dean brought out was smoked salmon over a crisp tostada. Not only was it a beautiful dish to look at, but it had bright and acidic flavors from capers and pico de gallo that brought out the smokiness of the salmon. The goat cheese provided a nice creaminess to the spicy kick of the aioli. 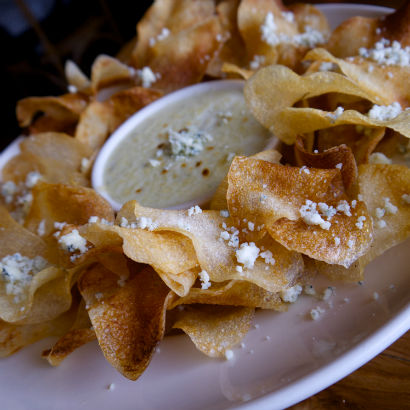 Next up was probably one of the most outrageous appetizers I’ve had in a very long time. Voted “Most Indulgent” appetizer in 2012’s Best of Westchester Magazine, I could only sigh upon tasting this dish. Homemade crisp potato chips surrounded a bowl of tangy Matag blue cheese dip. Utterly rich and addictive; I literally could not stop eating them. If you are a fan of blue cheese this is a “must have” dish when you go. 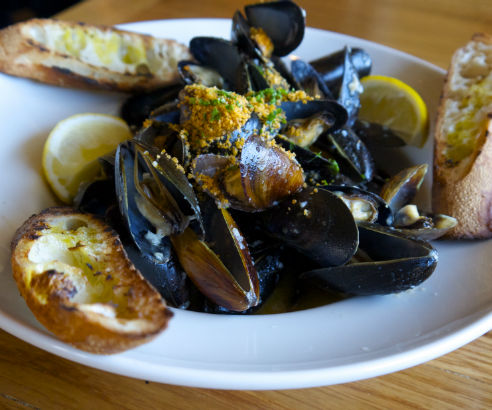 Another appetizer offering that hit the taste-mark for me is their classic steamed mussels dish. Simple, straightforward Prince Edward Island mussels cooked in a rich wine-oregano broth. Perfectly plated with crisp baguette slices to sop up the broth after you make short order of the mussels! 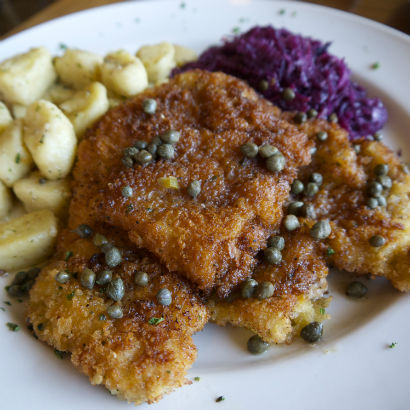 Moving on the main course  I really liked the veal schnitzel. German cousin to veal Milanese.  The main difference being the Italian version (sometimes) incorporates parmigianno-reggianno in the breading and is generally cooked in butter. Both a favorite of mine, but I tend to not order this dish out because more often than not the breading is thick and unappealing. Not the case at Beehive. The breading on the thin cutlet was light and crisp, balanced with briney capers that provide a great salty burst in your mouth. Special note should be made for the braised cabbage, which is sweet and acidic … agro-dolce happiness for me. 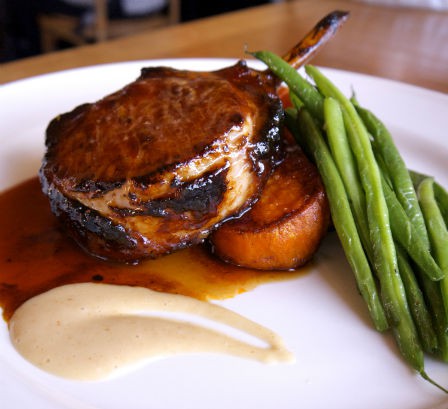 If I could pick one dish that I tasted on this food journey at Beehive, that I liked the best, it would have to be the double cut pork chop.  Pork chops tend to be a hit or miss at times, but this was far and way the best one I’ve had in a very long time. Not only was the meat cooked to an absolute perfect pink, but the caramelized glaze over it was amazing. Thick, sticky and sweet, yet not cloying. I’m not really sure how Dean did it, but is was fantastic. The caramelized sweet potatoes and perfectly cooked haricot verts completed this knock-out dish.

On to dessert. First, in all fairness I am VERY picky about dessert. Restaurants either do it right, or do it half-baked. You can pretty much tell immediately. It’s really as simple as dessert, for some chefs, is an after thought. For the diner that can be disappointing. After having a stellar meal you really want a stellar dessert. Pies have never been a favorite of mine, and for that matter neither is cake. I owe this to the fact that I was probably ruined as a child eating the outrageous Greek desserts made by my Mother and Aunt. 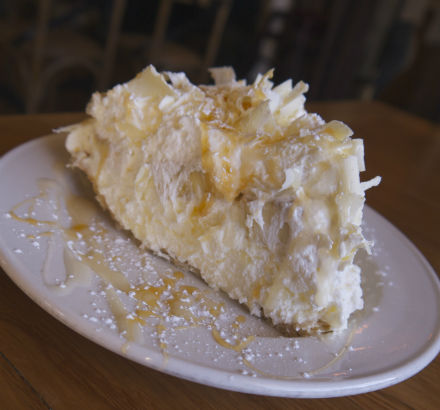 Valerie suggested two desserts for me to try, the first being their banana cream pie. Reluctantly I nodded. White chocolate combined with whipped cream is not something I would ever pick on a menu. However, lucky for me she did. Not only was it light as air, but the bananas provided a really nice balance to the cream and white chocolate. Never would I have suspected that I would like it. 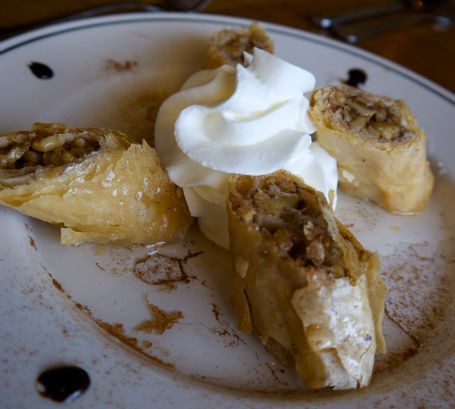 The other dessert was baklava. I don’t think there is anyone that has been able to match my Aunt’s baklava, and even I have tried myself with her recipe. Some come close, and admittedly this one did. Crispy filo loaded with cinnamon spiced nuts and a thick honey-like sauce drizzled over was just lovely. The absolute key to this dessert is not to saturate it with the sweet sauce. The balance was spot on, with Valerie’s version. The only thing I would suggest is not bothering with the whipped cream. The dish really doesn’t need it.

All in all, I had a most enjoyable time at Beehive and really looking forward to going back. Add this one to you HVRW Spring 2014 list, you won’t be disappointed!