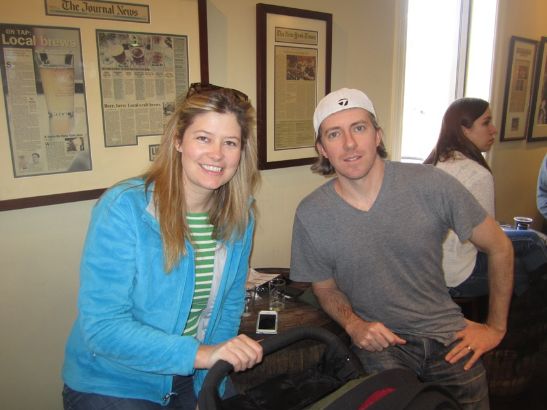 A few days before we turned our clocks forward, USA Today posited how the whole of America will “bemoan the hour we won’t get back until October.”

Which got me thinking. For starters, we get the hour back in November, not October.

And either you’re a glass-half-empty or glass-half-full type; either way, it’s a sign you should have one of the boys in the Captain Lawrence t-shirts make your glass all full and none empty.

But do we “all”, as the newspaper said, really bemoan that lost hour of sleep, or do some of us…half of us…most of us??? actually celebrate the extra hour of sunshine—particularly as we climb out of a winter that has been nothing short of insidious?

“We drink Captain Lawrence a lot, and had been saying for a while that we should come up for a visit,” says Pat. “It’s been a miserable winter, the sun is shining, and it seemed like a good day for it.”

Pat and Sara were unsure if babies were welcome, until they spied another stroller in the parking lot. (Sunday seems to have emerged as Baby Day in the Captain Lawrence tasting room, while Saturday appears to be Dog Day.)

Sara actually prefers the extra hour of sleep—only because Audrey wakes up at an even more heinous hour when Daylight Savings Time hits. “I do appreciate the sun though,” she adds, staring out the window as the fiery yellow ball goes to work on month-old patio snow. 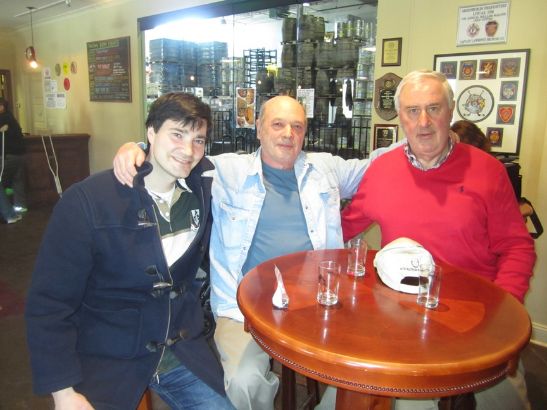 Across the room, Paul Winston of Scarsdale, son Logan of Manhattan and Paul’s old pal Ned Whelan of Dublin are enjoying samples. Paul is friends with Gil Perrone, father of CL staffer/Frost Monster creator Justin. “He’s been after me to come up here,” Paul says. “The wives are shopping, so we decided to spend an hour at the brewery.”

Paul sips the Sun Block, Ned the Pale Ale, and young Logan opts for the pilot-system offering ‘IP’Session, a hoppy yet mild IPA. Paul says he’s given no thought to the more sleep versus more sun debate. Logan and Ned vote for sundown occurring an hour later.

Paul does offer up a bit of historical context on Daylight Savings Time, saying it was Ben Franklin’s idea (add that to a list of Franklin inventions that includes electricity, bifocals, and the flexible urinary catheter). DST was devised to conserve candles, says Paul. “Candles were a big deal in the 18th century,” he notes. 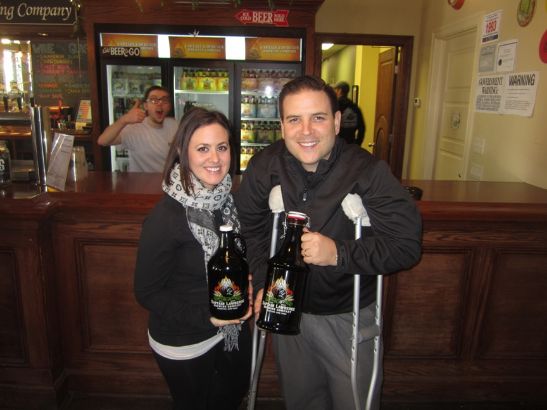 Leaning against the bar, alongside a pair of crutches (alas, not a Ben Franklin invention), Michael Holiday of Midland Park, New Jersey has brought his wife Michelle and his in-laws to the brewery to illustrate why he has invested in a Jersey brewery startup called Brix City. “I want to show them what I spent my money on,” says Michael, a golf pro favoring a fractured femur.

The in-laws are watching the Holidays’ twin girls, who in turn are watching a video on an iPhone ingeniously propped up on a bar stool; Michael calls the gals his “miracles.” Michelle, sipping an Imperial IPA, has given up alcohol for Lent. “Sundays, obviously you can do it,” she says.

Michael likes the rum-barreled brews, quaffing a Smoke From the Oak.

Like wee Audrey Mullen, the Holiday girls wake up crazy early when the clocks spring ahead. “I like ‘falling back’ way better,” says Michelle. “But I do enjoy it being light out.”

It’s not just those with babies who prefer the extra hour of sleep. As one might expect from a 20-something dude, beertender Doug is feeling the lost hour. “I try to tell myself that I’d like more light, but I’ll be very tired tonight,” he says. “I always feel screwed out of the extra hour.”

Bar colleague Jack sees it differently. “I get out of here at 5:30 and it’s light out. I’m able to do so many more activities,” says Jack, who sadly does not elaborate on “more activities.” 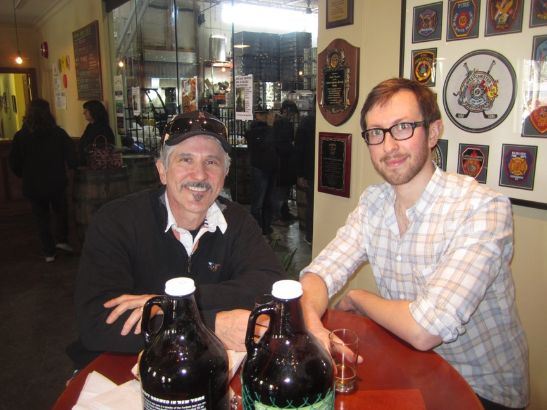 The tasting room crowd picks up and a mellow afternoon gets buzzy. Henry Leyva and Ben Cochran, both of Pleasantville, failed to meet for a drink on Friday and Saturday, but Sunday afternoon was open for both. Both enjoy the small-batch brews: Henry the Crème de la Crème cream ale, Ben the Amber Rush ale. Henry actually prefers the Imperial IPA—but also preferred when he could walk home after a few of them when the brewery was in Pleasantville.

With an 18-month-old baby at home, Ben says he no longer sleeps, so he sees Daylight Savings Time, and the extra hour of light, as a bonus. Henry does too.

“It’s been such a miserable winter,” he says. “It was a nice surprise when my wife said we had to turn the clocks forward.”