People are reading
You are at:Home»Restaurants»Restaurants We Love: 8 North Broadway, Nyack 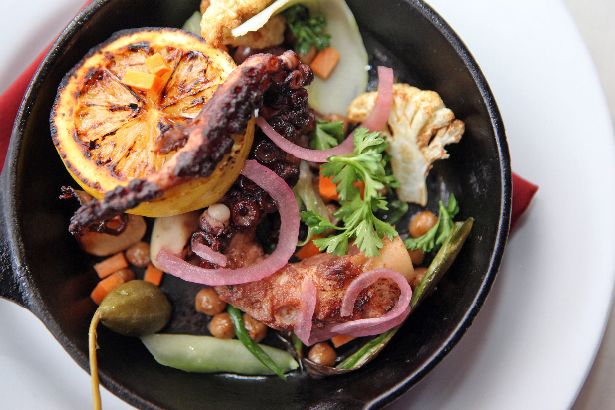 Every time we go to 8 North Broadway we wind up conversing (and comparing plates) with nearby diners. They’re generally either newcomers who have been dying to try the restaurant, or regulars just bursting to recommend their favorite dishes. That can be tricky — the menu is constantly changing to reflect seasonal ingredients and new ideas — but there’s always a new favorite to be discovered.

8 North Broadway opened in December 2012 in the former LuShane’s space. The iconic copper bar and tin ceilings were maintained; the rest of the space received a chic upgrade in both décor and cuisine. More than half of the Mediterranean menu consists of fresh seafood, including a sizable crudo (raw) menu. There’s also a good selection of inventive vegetarian and vegan dishes.

My husband and I have gone for an early dinner there with our toddler, who devoured the mezze, caviar dip and all (so proud!); closed the place down with a “quick drink” that escalated to hours of fun conversation with our new bar friends; and enjoyed several romantic evenings where our eyes darted from candlelit gazes at each other to the plates of our neighbors (it’s hard to say which looks were lustier). Every time, we’ve found the ambiance relaxing, the hospitality warm, and the food exceptional. 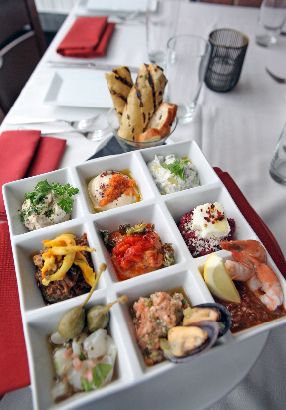 Chef’s Selection of Seasonal Mezze: This nine-item tasting dish is ever-changing. The selections normally incorporate several raw fish dishes — such as salmon tartare, taramasalata (a red caviar dip), and scallop ceviche — but the chef generously accommodated my current pregnancy restrictions and gave us a raw-fish-free selection this time. Ours included tender, slow-braised baby goat; orange-poached shrimp cocktail (the best spicy cocktail sauce my husband has ever tasted); roasted cauliflower with almonds and cherries; slow-baked eggplant tapenade; beet and chickpea salad; tzatziki, made from goat and sheep yogurt; hummus with rosemary, sumac and carrot sofrito; a slightly spicy conch salad; and thin, crispy fried octopus rings with lentils. The mezze is served with a side of delicious house-made flatbread.

Parsnip And Apple Puree: Little espresso cups of this delightfully creamy warm-weather soup were garnished with nutmeg, toasted almond, and a drizzle of aged balsamic for a little jolt of contrast. I was surprised to find that the soup didn’t contain cream; chef Constantine Kalandranis whips the parsnip with olive oil for a creamy texture that’s also vegan-friendly.

Sizzling Spanish Octopus: A signature dish; Kalandranis even has a specialized octopus supplier! The octopus is simmered in a simple court bouillon, grilled, finished with lemon and a red wine vinaigrette, and served with capers and grilled onions. Once that sizzling, delicious-smelling little cast-iron skillet comes out, you won’t be able to resist. The charred bits were my favorites, smoky and delicious.

Fish of the Moment — Mahi Mahi: The “fish of the moment” truly is “of the moment” — toward the end of our meal, we heard new patrons at the next table being offered the same preparation of bass! Our mahi mahi was gently poached in fish broth with vegetables and white wine, then removed when just cooked. Orzo, chickpeas, lemon, fresh herbs and “avgolemono” — a Mediterranean egg-and-lemon sauce — were then added to the broth, which was brought out in a saucepan and spooned over the fish and its surrounding bed of vegetables and orzo right there at the table.

Roasted Organic Hen: An organic, free range Cornish hen from Goffle Road Poultry Farm in New Jersey,, butterflied, roasted and de-boned except for the drumsticks and wings. The skin was crispy and perfect, and the meat was fall-off-the-bone tender. It was served on a bed of roasted cauliflower (including a floret hiding under each wing!) and a delicious mixture of kale and hazelnuts. 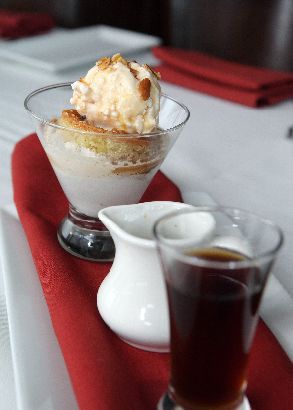 The seasonal cocktail list at 8 North Broadway is always amazing. My husband considered the Apple Pie in a Glass (essentially an apple cider sangria: house-made apple cider moonshine with Everclear, nutmeg, cinnamon, and sugar, mixed with a dry Riesling and topped with diced apples and pears), but instead got Bourbon Tea, which mixes Rough Rider bourbon, limoncello, tea, and mint. It was brought out steeped in a tea press with lemons and mint leaves floating within. The warm liquid went down easy and the bourbon lingered pleasantly in the back of the throat.

For dessert, we were among the first to try their new affogato, a twist on the classic Italian preparation of espresso poured over ice cream. In this instance it was poured over a “hot honey” gelato made with Greek honey and chili powder. This created three very distinct flavor sensations—the bitterness of the coffee, the super-sweetness of the honey, and the heat in the back of the throat from the chili. The gelato was made especially for 8NB by Umberto Turiello of Turiello’s Pizza down the block, using a base imported from Italy. We also enjoyed the rich dark chocolate pot de crème with biscotti.

This restaurant gets a lot of Nyack regulars, though people do travel. Due to the refined cuisine and not-insignificant price point, the clientele tends to range from hip thirtysomethings to sophisticated retirees.

Constantine Kalandranis, head chef and co-owner, applies classic Mediterranean techniques to fresh local and seasonal ingredients, constantly reinventing the menu alongside executive chef Hichem Habbas. General manager Richard Mitchell possesses a natural gift for making every patron feel like his own personal guest, and certainly gets some credit for the restaurant’s large population of regulars. The trio bought the building, so they’re cultivating their clientele for the long haul.

I’m dying to try their Sunday brunch — perhaps the blueberry semolina pancake with hot orange syrup, the Mediterranean breakfast with eggs, potatoes, pita and goat sausage, or the frittata of the day.

There’s always plenty to do in Nyack — shopping, art galleries, restaurants, bars (including two wine bars), Elmwood Playhouse, the Edward Hopper House, and The Nyack Center among them. Honestly, even just walking down Main Street on a weekend evening tends to be an incredible source of entertainment and people-watching — I’ve parked far away on purpose with this intention. One time we even popped into a bar and sang a couple of karaoke tunes on our way back to the car. Another time we saved room and hit The Sweet Spot Candy Shoppe.

Recurring events include a monthly “Eat, Sip, Mingle & Learn” series, a themed four-course meal with a live cooking demo and accompanying wine or beer pairings (a special guest from the featured winery or brewery is often on hand for discussions); a Monday Night Supper Club prix fixe; “Why Not Tuesday,” featuring half-price bottles of wine; $1 oysters on Wednesdays; and a Mediterranean-style Sunday brunch. An occasional Sunday night program of live music is getting underway after several successful Jazz Nights. 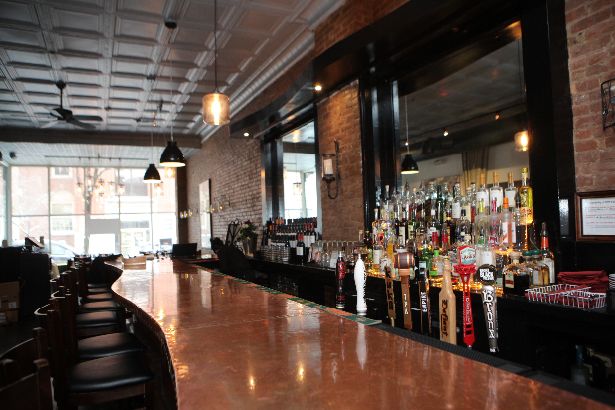 Freelance Cafe & Wine Bar: Renowned chef Peter X. Kelly (X20, Xaviars, Restaurant X) doesn’t disappoint at this cozy bistro and wine bar. Enjoy the local art on the walls while nibbling on small plates like a creamy rock shrimp popover or digging into entrees like Berkshire pork with fig sauce. Or just relax at the granite bar with a glass of wine from the award-winning cellar it shares with Xaviars. Visa, MasterCard and American Express are now accepted, but you still need to get there early: Reservations are not. Go: 506 Piermont Ave., 845-365-3250, www.xaviars.com.

RiverMarket Bar and Kitchen, Tarrytown: The team behind Crabtree’s Kittle House in Chappaqua is making its mark in the new Hudson Harbor development in Tarrytown. RiverMarket Bar and Kitchen takes the “farm to table” concept a step further with a farmer’s market in the front of the restaurant, a menu filled with local, sustainable, and in many cases biodynamically farmed produce and meats, and an adjacent wine store where sustainable viticulture is a close-second priority to quality. Executive Chef John Holzwarth serves up dishes such as Hudson Valley foie gras and rabbit terrine, heritage pork shoulder roast, and “Ravioli Lidia’s Way” (Bastianich is a former mentor). Don’t miss the large copper bar in back, which features a fine selection of New York state beers on tap, as well as a few draft wines. The generous outdoor patio offers great views of the Tappan Zee Bridge. Go: 127 West Main St., 914-631-3100, www.rivermarketbarandkitchen.com

The Twisted Oak, Tarrytown: Chef Michael Cutney, formerly of Union Square Café and Café of Love, serves up New American farmhouse fare with an Italian twist. The seasonally inspired menu will change daily, prone to the whims of both local produce and Cutney himself, but will always include comforting staples such as fresh-made pastas, tender meatballs, and duck poutine. Check out the unique bar, made from reclaimed French oak wine barrel staves. Go: 61 Main St.; 914-332-1992. Check for its Facebook page.