I don’t need an excuse to eat Eric Gabrynowicz’s cooking. The chef and co-owner of Restaurant North in Armonk was recently nominated by the James Beard Foundation in the Best Chef in the Northeast category and is starting to pop up on daytime television shows doing cooking demos, all charming and talented.

The word is out: Restaurant North is not to be missed. Which is why I made my reservation as early as I could during Hudson Valley Restaurant Week.

The menu at North is changes frequently and is printed daily, so you won’t find it anywhere online. And for Restaurant Week, Gabrynowicz has pulled together a three-course menu that will surprise you if you haven’t experienced his cooking before. Dishes are composed with obvious understanding of balancing flavor and texture that is well beyond the capacity of us normals.

Classic pairings like apple and bacon, ham and eggs or chicken and rice are expanded on with confiting the chicken or adding a drizzle of sriracha. The only common denominator for the predominately local ingredients— some Asian, some Italian— is that they are combined in a way I would never think of in the comfort of my own crock pot kitchen. 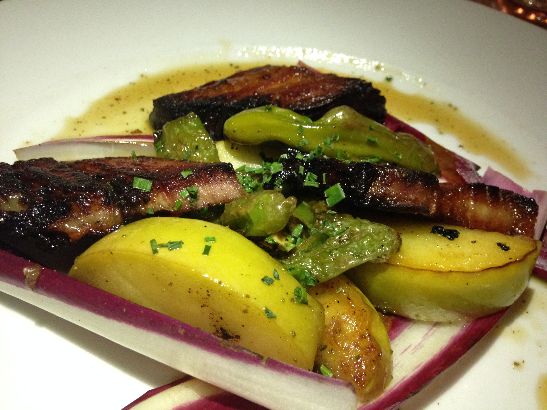 My first course was roasted tart apples and thick bacon, served with salty shishito peppers, tardivo radicchio and chives. The bacon was smokey and savory, I think I let out an audible groan when I tasted it. My only complaint was that we weren’t served any bread at this point, so I had nothing to sop up the lemon-maple glaze.

Despite having bacon to start, I ordered spaetzle-pork belly hash for an entree, topped with a poached farm egg, honey and sriracha (Gabrynowicz is fond of whole roasting a pig and using the various cuts throughout his menu). The pork belly almost looks like a biscuit, and cutting into the golden brown and crispy outside reveals shredded pork. And the egg was so delicately poached, a little viscosity was a welcome counter to the sturdy meat. 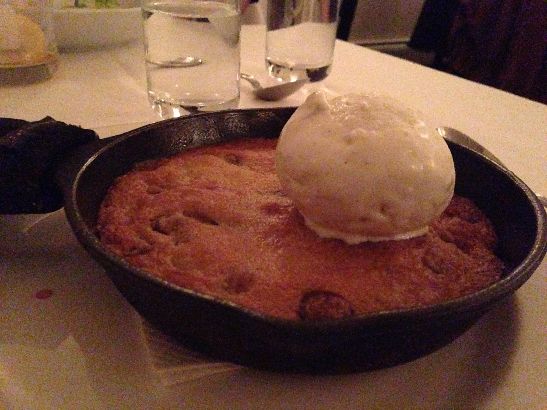 For dessert I ordered one of the menu items I’ve enjoyed at North in the past: a giant chocolate chip cookie with a scoop of Jane’s Hudson Valley vanilla ice cream. I’m admittedly a sucker for anything served in my own person cast iron skillet, but after finishing two heavy pork dishes it was just too heavy and I barely made a dent. If I go again, I’d order what my companion had, a citrusy yogurt panna cotta that tasted like a creme fraiche-flan.

Wine drinkers and cocktail buffs praise Stephen Mancini’s selection at Restaurant North, but when I heard that Gabrynowicz and Scott Vaccaro of Captain Lawrence teamed up to make some in-house beers, I was excited to try one. Unfortunately my first choice, an Abbey-style ale made with Sycamore Farms acorn squash, was out so we drank the Smoked Porter and Sessions I.P.A. And as you might expect from that partnership, they were both excellent.