People are reading
You are at:Home»Columns»HVRW Spring 2014: The Parlor

The Cookery was one of the first new wave of Westchester foodie institutions I experienced back when I first caught wind that such an explosion was happening in my home county. Outside of NYC, I had not experienced a menu with such depth, innovation and such an even blend of deliciousness and playfulness. On top of all that – the space looked freakin’ cool. It quickly became the staple location for many of my friends’ “special occasion” dinners.

More recently – last summer – I made a few special trips to some river town farmer’s markets for the near sole-purpose of checking out the Cookery’s mobile pizza oven, DoughNation. The pizza parlor on wheels slings out pies that are the perfect combination of crispy, blistered spots and chewy, dense dough. Even the simplest combinations are absolute revlations due to the stellar ingredients used – house-made mozzarella, rich marinara, fresh basil. It felt like a straight up sacrament to sit on freshly cut grass on an early summer evening and break some of DoughNation’s bread with good friends. All that was missing was some wine to bless the evening a little bit more.

And then Chef DiBari went and opened an entire house for me to worship his creations in. 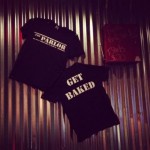 Even their tees speak to me 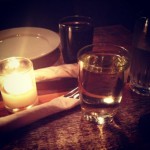 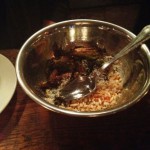 Rice crispies and all 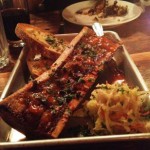 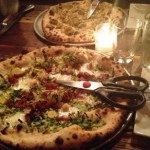 A new way to slice up the pie 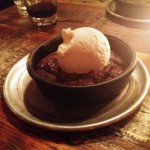 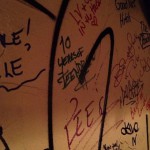 Make your mark before you go 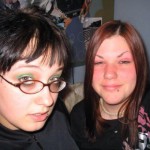 Us in all our mall punk glory

Nostalgia for me means spending every extra penny I had on tickets to punk rock shows all over the tri-state area, convincing my parents and myself that a black hoodie was a sufficient winter coat, and pizza. Lots and lots of late night pizza. The food brought me to The Parlor, a brick & mortar equivalent to DoughNation with the same pizzas on the menu as the mobile oven, plus much, much more. I stopped dead in my tracks the first time I walked in the door to see the commissioned street art piece and the ever-growing wall of patron graffiti. And the music – the music wafting out of the speakers were the very same bands I spent so much of my youth trapsing around the greater NYC area to see. Topping it all off, the first night I arrived on the scene they were projecting Clueless on to the back wall. I nearly planted my feet and refused to leave.

Now it’s Hudson Valley Restaurant Week and even if you don’t have the sordid mall-punk past that I do, you still really, REALLY need to check this place out. Not only is the regular menu un-missable, I do believe that the Parlor’s HVRW specials are quite possibly the best bang for your buck in the whole batch. You’re getting a starter, a pie, a dessert plus two glasses of the restaurant’s famed tap wine selection for $30. Though the name of the joint might invoke thoughts of a menu filled with marinara drenched fried cheese (NOT that there is anything wrong with a fried ravioli,) the offerings go above and beyond your neighborhood pizza parlor’s call of duty.

On my HVRW sojourn there, I opted for the crazy innovative buffalo bone marrow. Half a Flinstone worthy bone is presented to you smothered in wing-sauce and sprinkled with blue cheese crumbles along size a fennel-cabbage slaw and some bread for sucking up every last bit of flavor. I – I don’t even know who I am anymore, this dish had me re-evaluating every choice I’d made leading up to trying it. Why had I not discovered it sooner? Where had I gone wrong?

We also snagged the crispy brussels sprouts which lived up to their name with help from a toss of rice crispies. Chili honey smothered the whole plate and took everything to other worldly levels. As for the pies themselves, we opted for the clam pie – which was garlicky and bright. Also the brussels sprouts pie, which what can I say? It was brussels sprouts and bacon…on a pizza…Chef DiBari’s pizza. You just know it was crazy good. The meal wrapped up with tandem brookies – brownie cookies baked in super-hot mini skillets and topped with Jane’s Hudson Valley vanilla ice cream – perfect. For wine, we’d chosen two Gotham Project options – the Riesling & the Malbec. The tap wine is such a cool way to keep things simple and evidently cost effective enough to allow the spot to serve samples as part of their special offerings for HVRW.

As we ducked out – my fellow former mall-punk friend and myself – signed the check and the wall, it dawned on me I just might be stalking this mini restaurant dynasty through every new incarnation. Fine with me, keep the pizza party coming and I’ll keep the following strong.