People are reading
You are at:Home»Hudson Valley Restaurant Week»HVRW Spring 14: Velo in Nyack

The towns of Nyack and nearby Piermont are notoriously overrun by cyclists on the weekends. Chef Anthony DeVanzo, an avid cyclist himself, is frequently among them. So it’s no wonder that he named his restaurant and wine bar “Velo,” which means “bicycle” in French. The cozy, tasteful décor incorporates a few classic representations of his beloved vehicle, including a lovely copper penny-farthing in the window. Thankfully there was no spandex to be found among my fellow diners.

This was my first time at Velo, though not my last—I need to go back and try their famed black and white truffle mac and cheese and brick oven pizza (accompanied, of course, by a glass from their extensive wine list, which I opted against in my current pregnant condition). But on this particular evening I had a job to do, so I stuck to the Restaurant Week price fixe, as did the friends who accompanied me. 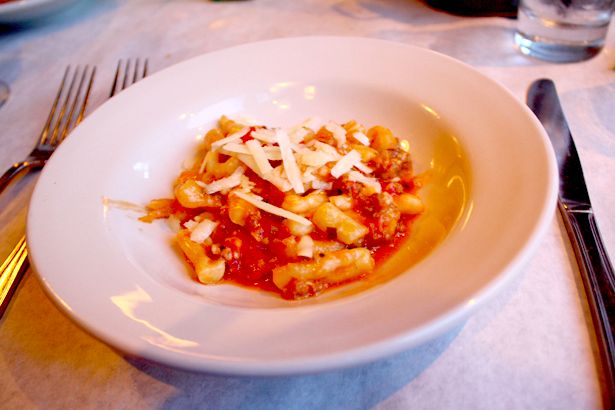 I was worried that the house made cavatelli in a sausage and fennel ragu with mint and pecorino romano would be too filling, but it was wonderfully light and just enough for an appetizer. The sausage was crumbled throughout in a way that did not overpower the mild tomato sauce. I was pleased that the cheese did not disappear; it was easy to get some in every bite. The pasta was soft—possibly a little too soft—but that softness just made it melt in my mouth.

My friend L liked the apple vinaigrette in her frisèe salad, and thought the Manchego cheese and walnuts added a nice contrast of texture and flavor. She found the grilled asparagus a bit too mature, though—thick, “like tree trunks.” It was, however, cooked perfectly, to the ideal “tender-crisp” consistency.

I need to apologize; we were so preoccupied with our meals that I forgot to photograph the entrees at all! Bad blogger! Terribly sorry. There will be three dessert shots later to make up for it!

The coffee rub added a slight kick to the otherwise very mild pork tenderloin, with a nice charred flavor. (Bonus? The coffee grounds made my baby dance around a bit in my belly!) The very mild three cheese sauce blended well with the smashed red potatoes, which were my favorite kind, featuring a good texture and some bits of skin (creamy, snowy-white mashed potatoes work with some things, but this dish called for a bit more presence, and these potatoes delivered). The roast Brussels sprouts were yummy and paired very well with the rest of the dish.

My friend J was at first turned off by the cold grilled cherry tomatoes atop her dish (“Why bother grilling them if they’re going to be cold?”). Once she got into her pan roasted monkfish, though, she was sold; the very mild dill cream sauce worked well with the more well-seasoned bites of fish. The baby bok choi was her favorite part—nice seasoning, sautéed just right, and with enough crunch to be good with the creamier whipped potatoes. She actually tried to replicate the baby bok choi at home a few nights later!

The menu hadn’t mentioned any onions in the red wine and tomato braised beef with mushroom risotto, yet there was a pile of fried onions on top, and sautéed onions hidden beneath the meat. My friend L found the contrast of the crunchy onions, soft steak, and creamy risotto to be a wonderful combination of textures and flavors, and concluded that the ideal ratio would involve “half the onions and double the risotto.” 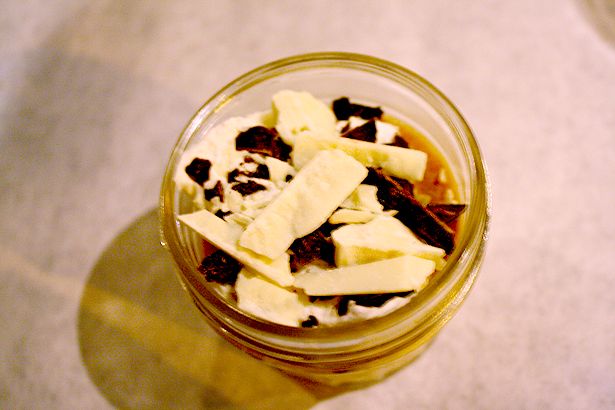 I was a little confused when a small, baby-food-like mason jar was placed before me sans plate. The texture of the caramel pot de crème within furthered the “baby food” impression, but it was incredibly delicious, with a really mild caramel flavor that wasn’t cloyingly sweet. The chocolate “shavings” on top were more like large chunks, especially the white chocolate, and both chocolates worked really well with the caramel—especially the white chocolate, which I would have thought it would be too close to the crème but was just right. 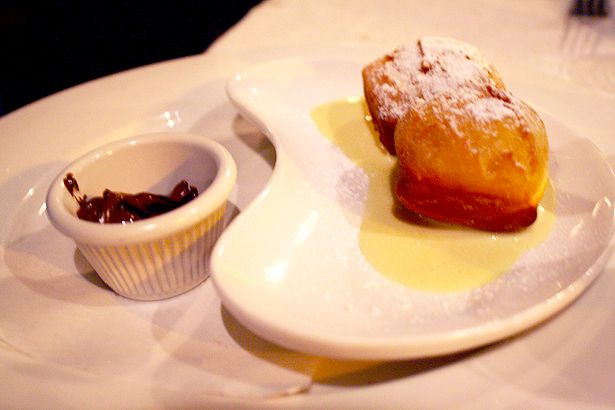 J’s beignets were nice and soft, but needed the accompanying sauces for a bit of flavor. The puddle of vanilla sauce they were sitting in didn’t add much, though, and the beignets were too big for the little cups of Nutella, requiring that she break them apart in order to dunk them. 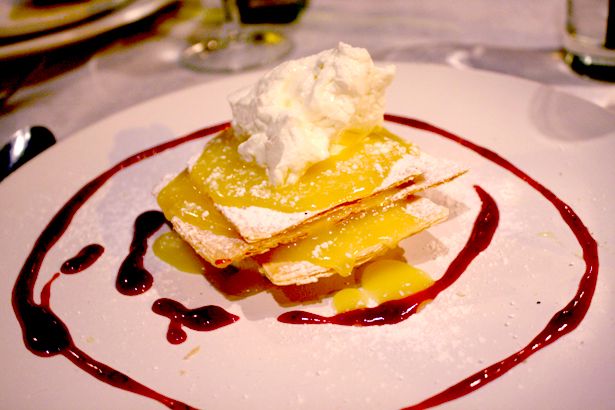 L described the filling of her lemon mille-feuille with crème Chantilly as like a good lemon merengue pie. Crispy sheets of flaky pastry added a nice texture and the mixed berry coulis drizzled across the plate was delicious.