People are reading
You are at:Home»Restaurants»Openings»Exclusive! Michael White on His New Westchester Restaurant: Campagna at the Bedford Post Inn

Campagna, the new restaurant going in the former Farmhouse at Bedford Post Inn, will open in mid-May with an upscale, Italian-themed menu that will appeal to everyday diners, including pasta made in-house, says restaurateur Michael White.

White, recently named a finalist for Best Chef of New York City by the James Beard Association, owns the Altamarea group that includes 10 restaurants, seven of which are in New York.  He says that that guests can expect lower prices than in his Manhattan restaurants.

Owner Richard Gere recently handed over the restaurants at The Bedford Post Inn to White. While the opening of Campagna, formerly the Farmhouse, won’t happen until mid-May, a concept is already in place.

“One thing that Richard is extremely keen on is  the ability to come back more than once a week,” says White. “People don’t have to come for the full monty— just a salad and a great pasta then head home.” 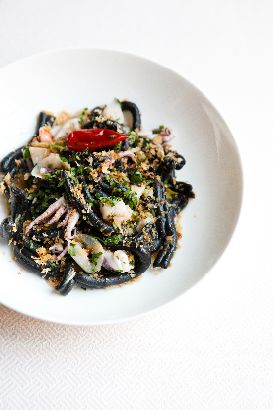 PJ Calapa, who is the executive chef at Altamarea restaurants Ai Fiori and Costata in Manhattan, will be executive chef at Campagna, too. He and chef de cuisine Devin Boyzaka are working on the new menu for Westchester. Expect elegant fresh pasta dishes, like the Cassarecci al Nero served at Costata, puttanesca with shrimp, seppia, olives and capers.

“The common denominator is an in-house pasta program,” says White,. “More along the line of where we are now, definitely approachable.”

Calapa and Boyzaka are friends from their days at the Culinary Institute of America. Boyzaka, a sous chef at The Inn at Little Washington, is cooking at Ai Fiori until Campagna opens.

“Devin’s tutelage has given him the right back bone for the job,” White says. “It’s a perfect move for him.”

The Barn will keep its name and remain the more casual dining option. And there are no plans for major decor changes for the Farmhouse at The Bedford Post Inn, which Richard Gere and Russell Hernandez will continue to operate.