People are reading
You are at:Home»Cooking»Christmas»Lemony Carrot ‘Fettuccine’ With Toasted Walnuts

Though carrots often make it into the Easter feast lineup, I’ve never understood why. Maybe it’s a nod to the Easter bunny.

Typically, we prepare them much as we prepare sweet potatoes (their distant orange cousins) at Thanksgiving — by glazing them and otherwise shoveling on extra sugar. I’m guessing that this is a reaction to the carrot’s bright color, which reminds us of a kid’s toy. It’s orange. It’s fun. On the plate, carrots are more like a candy than a vegetable.

Still, I like carrots and I think I’ve figured out a way here to redeem them. The trick is not to be waylaid by their color, but to take advantage of their length and texture. Long, sturdy carrot peels are reminiscent of individual strands of fettuccine. Fine. Let’s prepare them as we would, say, a dish of fettuccine Alfredo — by dressing them with a creamy sauce: Lemony Carrot ‘Fettuccine’ With Toasted Walnuts.

Not coincidentally, it’s a strategy that also allows the carrot’s natural sugars — which are plenty sweet all by themselves — to shine.

You’ll want to start with big, long, fat carrots (affectionately referred to by some grocers as “horse carrots”). Just peel off and discard the outermost layer, then continue peeling on all sides until you’ve reached the woody core. I find it easiest to start at the middle of the carrot and peel down the bottom half, then flip it over and peel the top half. This technique allows you to do the job faster than if you peeled the entire length of the carrot from top to bottom. The cores are too thin and hard to peel. You can munch on them yourself or reserve them for a future stock.

The sauce for this “fettuccine” is quite simple. It’s based on Neufchatel, the French cream cheese, which miraculously provides us with the creaminess we crave even though it possesses one-third less fat than most other types of cream cheese — and much less fat than heavy cream, the ingredient that usually puts the cream in creamy pasta.

We counter-balance the carrot’s natural sweetness with lemon, both the zest and juice, though lime would work just as well. The walnuts add crunch, nutty taste and some nutrition, but any nut will do: pistachios, almonds, cashews. Just pick your fave.

The carrot fettuccine strands cook up very quickly — inside of 5 minutes — so you’ll want to prep them ahead of time, and measure out all the rest of the ingredients as well. Once the fettuccine is cooked, you need to move it out of the pan and onto everyone’s plate before the strands go soft. Happily, cooking this dish is simple enough to do at the last minute. And who knows, you may even be able to get your kids to dig into these carrots. They’re veggies but they’re wearing a fettuccine suit. Sara Moulton, The Associated Press 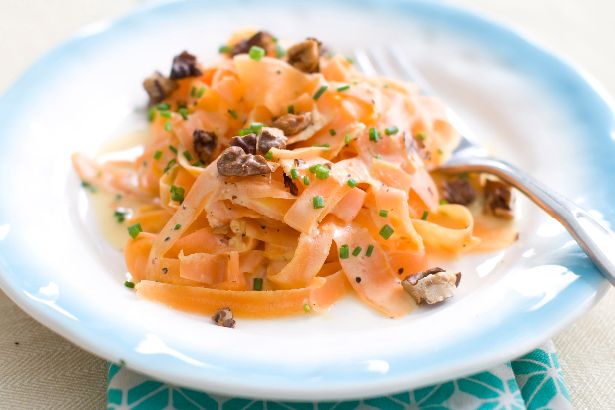