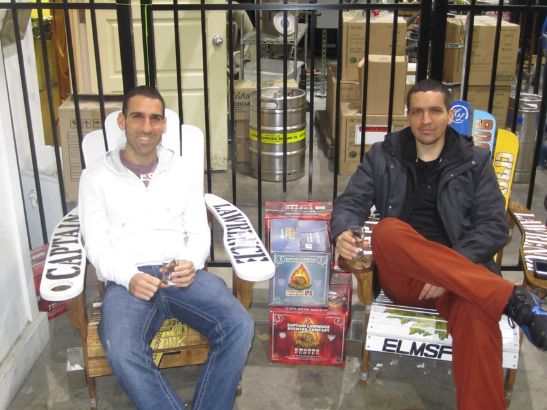 Best seats in the house!

It’s opening day for our national pastime, but it really doesn’t feel like it. The weekend was a wet washout, a few flakes even flew, and if you look around a bit, you can still find clumps of snow where the sun, as the saying goes, don’t shine. But when the ump calls “Play ball!” for the first time all year, hope springs eternal.

Bryan Carney of Sparkill, across the Tappan Zee, wears a Mets cap and a sheepish smile. So he’s a fan of the Metsies, yes?

“You could say that,” Bryan says with a shrug, the way Mets fans do.

He and Ally Nolan have been talking about visiting Captain Lawrence for years, and—at long last–got around to it today. “We finally got some time off,” says Ally, sipping the Kevin’s Bacon Ale, brewed with a mix of Irish malts, maple syrup and, yes, bacon. “We finally made it.” 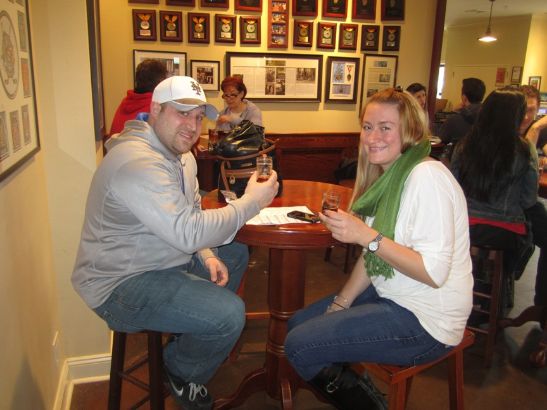 Bryan likes the Imperial IPA a lot more than he likes the Mets’ hopes for 2014. “Eighty wins—that’s the goal,” he says.

Ally is more of a passive fan. “She’s been upset with them since they traded R. A. Dickey,” explains Bryan. “And Jose Reyes.”

Across the tasting room on a mostly mellow Sunday, Michael Giuliano of North White Plains is also a Mets fan—something of a rarity here in the Bronx’s backyard. “My dad was a Brooklyn Dodgers fan,” he says with the same shrug Bryan showed a minute before. “That’s what happens.”

He’s having the monster ale Seeking Alpha, but would prefer something a little less hoppy than a triple IPA. Wife Enzara is enjoying her favorite: The Brown Bird Ale. They serve it at Victor’s in Hawthorne, where Enzara bartends. She’s happy to spend a lazy Sunday in the tasting room. “You get stuck in the house all winter and you get cranky,” she says. “But you go out for a few beers and it’s not so bad.”

Michael has the good humor of a long suffering Mets fan. He tells the story of his church’s pastor, regaling the congregation in Valhalla about the time he gave Mets tickets to a parishioner, who gave them to another parishioner, and so on—until the pastor’s tickets ended up coming back to him. 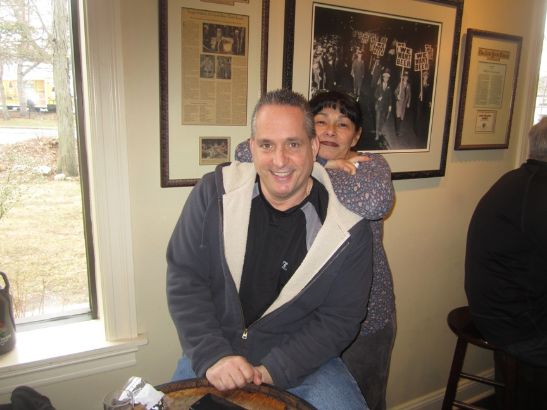 While there have been three separate Jeffersons to play in the major leagues (Jesse, Reggie and Stan, if you’re scoring at home), Pavel and Milan Jefferson, brothers living in Hartsdale, have but a passing interest in baseball. “Is A-Rod still out?” asks Milan.

They grew up in San Jose and sort-of root for the A’s. They have the best seats in the brewery—a handsome pair of Adirondack chairs, emblazoned with Captain Lawrence logos, all alone in the brewery’s rectangular viewing area outside the tasting room (top photo). “Actually, someone took our stools inside,” says Milan. “We came out here and saw these beauties.”

Pavel enjoys the Demon Sweat black pale ale. Milan says the IPSession India Pale Ale is “pretty awesome.” Pavel, a tennis teacher, had hoped to go snowboarding, until the rain put a damper on his plans. “I wanted to do something fun in the area,” he says, “and thought, where else can I go?”

He does have one fond baseball-ish memory: having his graduation from NYU at the old Yankee Stadium, when a streaker ran the bases and made it to third before the nude dude was tackled. The memory, and the Demon Sweat, bring a smile to Pavel’s lips.

Speaking of Yankee Stadium—and Demon Sweat–a few samples of the dark, dark ale have struck Josh Glantz of Scarsdale with a blast of promotional genius: tie in Captain Lawrence to Derek “The Captain” Jeter’s final season with the Bombers. “You gotta get it into Yankee Stadium!” he enthuses. 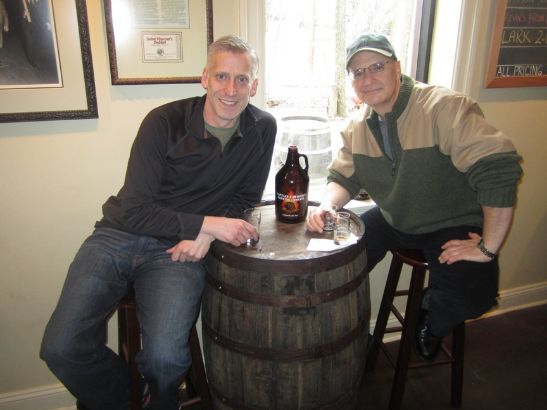 Josh has been visiting Captain Lawrence since the early days, with a growler showing a Pleasantville address to prove it. It’s Michael’s first time at 444 Saw Mill River Road. He looks lovingly to the patio outside. “As soon as the sun is out, I might be here every weekend,” he says.

Michael is from hops country in Washington State, and roots for the Mariners…to go .500 this year. “You’ve got King Felix! You’ve got Cano!” counters Josh. “That’s it,” says Mike. “Stop now.”

Hailing from the Bronx, Josh loves the Yankees, and says some younger players—and A-Rod watching from home–will at least make them more fun to watch this year.

Whether they’re rooting for the Yankees, Mets or Mariners, everyone in the room is pulling for spring to finally show itself. “I’m desperate to get outside,” says Josh. “With the grill…and the beer.”

Today’s “Notes” represents No. 100 in the series! The “Notes From the Tasting Room” book is available at the brewery and on Amazon.