People are reading
You are at:Home»In the News»10 things you don’t know about Jenny Rosenstrach of ‘Dinner: A Love Story’ 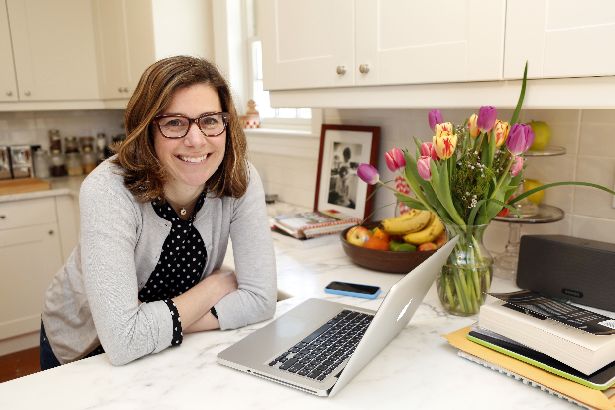 Jenny Rosenstrach and her husband, Andy Ward, love dinner. So much that they document it. Regularly. For the whole world to read.

Dinner: A Love Story is a popular blog that Rosenstrach and Ward started in March of 2010, an ode to the Dobbs Ferry family’s evening oasis amid hurried days of piano lessons and soccer practices. They also write a column for Bon Appetit together, The Providers, which touches on the same themes.

With nearly 14,000 likes on Facebook, the couple have devoted readers who look forward to their recipes and witticisms on parenting their two preteen girls. And they’re not afraid to speak up with questions about a recipe, or if Rosenstrach and Ward miss a post because of a busy week.

“I get a wide variety of feedback,” says Rosenstrach. “But the theme is that people appreciate the fact that it’s not judgmental. Everyone is busy and everyone wants to do the right thing, but it doesn’t always happen.”

And just like most busy family kitchens, recipes featured on Dinner: A Love Story (known as DALS) run the gamut from a quick and easy pan-fried Hawaiian pizza to a pork shoulder ragu worthy of a dinner party.

Anyone who reads DALS, or has a copy of her first cookbook by the same name, knows a lot about Jenny Rosenstrach. She has an honest, open-book blogging style and attaches personal stories to each recipe — like the time her husband confessed to not actually liking sweet potatoes and she reacted appropriately heartbroken.

Is there anything about the busy mom and blogger that devoted DALS readers don’t know? She came up with 10.

1. She is a fraternal twin. “My brother, Phil, lives on the Upper West Side. I also have a sister, Lynn, who lives in Larchmont, but for some reason that’s not nearly as fascinating to people as the twin thing.”

2. She once gave Steven Spielberg a tennis lesson. “He showed up at the East Hampton Tennis Club, where I was working in the summer of 1993, and wanted to hit.”

3. “I am woefully under-wardrobed (for instance, I only own one belt and that was a recent purchase) because I really dislike shopping. For clothes that is. I could spend hours at the farmer’s market and not get bored.”

4. “I am a total soccer mom, much as I really don’t like that phrase. Both my daughters play on club teams in Westchester and watching them play — even just practice — is the highlight of my week.” (Something Dinner: A Love Story readers already know because crazy practice schedules inform when and what they eat for dinner almost every night.)

5. She love birds. In Westchester, her favorite sightings have been a Baltimore oriole (right in her Dobbs Ferry neighborhood), several pileated woodpeckers (along the Old Croton Aqueduct in spring), and then red-winged blackbirds by the dozen in Tibbetts Brook park. “They are pretty common, but for some reason I only ever see them there — it’s like they know I’m coming. Oh and American goldfinches. You can definitely spot these around Westchester, but they are so strikingly yellow (the males) and happy looking that I’m always taken aback. My kids and I say a goldfinch spotting means we’re going to have some good luck.”

6. She fantasizes about running a coffee shop in her neighborhood. “I’d want it to be Hudson-River themed. I just need a little more money — and a lot more time.”

7. Dinner: A Love Story was optioned by Imagine Entertainment for a TV series. “I know better than to think that this will ever amount to anything, but it doesn’t stop me from fantasizing all the time about who would play me on the show. When I’m not fantasizing about my coffee shop, that is.”

8. She still read the paper version of the New York Times. “I also read it online sporadically during the week, but the only way I feel like I haven’t missed anything is when I flip through a physical copy.”

9. Locally, she loves to visit Manor Park in Larchmont. “I grew up around the corner from it so I’m sentimentally attached, but every time I sit on a gazebo bench there and look out at the Sound (which is often because my sister and parents still live in Larchmont) I can’t believe how beautiful it is.”

10. “Once, my husband and I cooked something brand new every night for a month because we were sick of the pasta-pizza-nugget dinner vortex with the kids. It changed everything and my next book is all about what we learned along the way.”