People are reading
You are at:Home»Restaurants»Sparkill Steakhouse: Restaurants We Love 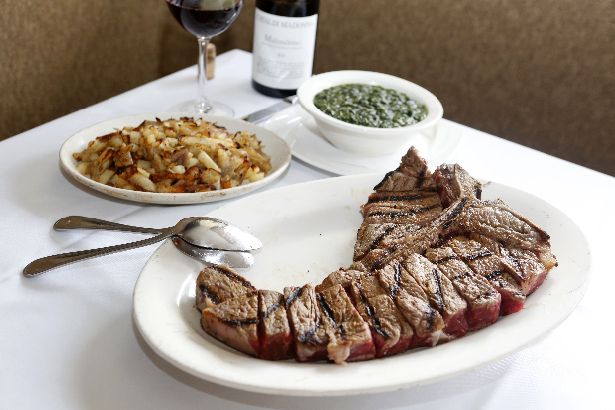 Steaks are aged for several weeks in a dry-aging room downstairs. Thousands of wines are kept at their ideal temperatures in the wine cellar room. The large party space upstairs has its own bar and patio, and a beautiful ballroom featuring skylights, vaulted ceilings, and wrought iron chandeliers for picture-perfect events, which have become a big business for the restaurant. A small lunch menu recently made its debut, and in warm weather the downstairs patio will provide a welcome spot to dine under the stars.

My husband and I celebrated our anniversary at Sparkill Steakhouse last November, but I hadn’t ordered the steak, which I realize was a big miss (though my roast chicken was incredible). This time we got a nice seat by the fireplace and took our order suggestions straight from the owners — though we did choose to repeat the same delicious side dishes we’d enjoyed before. They were just too perfect to pass up!

See a photo gallery from Sparkill Steakhouse on lohud.com.

Extra Thick Cut Bacon: My appetizer choice was a no-brainer; I’m a bacon girl, and the smell of the thick-cut, perfectly charred bacon still sizzling on its plate romanced me even more than the crackling fireplace before us. It was chewy without being fatty; the strip of white fat down middle melted its flavor nicely into the charred meat. There was so much delicious bacon-y flavor rolling around in my mouth I almost felt bad for everything that had to follow: how could it possibly compare? (Somehow, it managed!)

Baked Clams Oreganata: A special, topped with seasoned breadcrumbs and a creamy lemon-white wine sauce. The dish had the perfect levels of breading, seasoning and sauce to complement the clams without overpowering them, and there was no grit to be found.

Prime Sirloin Steak: Derguti and Cungu highly recommended the prime sirloin, which is “exactly the same” as that served at their former employer, Sparks Steakhouse (it was even prepared by a chef who worked at Sparks for 14 years). Rather than dry-aging like many of Sparkill’s steaks, this one was wet-aged (vacuum packed) for 4-6 weeks, then seasoned with a proprietary blend of spices and heated in a special broiler to 1,800 degrees to char the outside and seal the juices inside the meat. It was incredibly juicy and flavorful with a nice crispness on the outside.

Colorado Rack Of Lamb Chops: A rack of tender, juicy, sustainably raised Colorado lamb, prepared with just the right amount of pink. The flavor was rich, yet also mild, and not at all gamey. Much like the steak, the outside was extremely flavorful and a little crisp; the prep was similar, with the super-high-heat broiler sealing in the meat’s juices while fusing the same Sparkill Steakhouse seasoning into the meat. The seasoning wasn’t the star, though; the flavor of the meat held its own. It was served atop garlic-roasted spinach with big, soft cloves.

Creamed Spinach: We ordered this side dish before we knew that my lamb would come with spinach; luckily, each was so expertly prepared that they were sufficiently different experiences. The creamed spinach was very fresh, very green (it’s made with the full leaf), and incredibly smooth — yet it included no actual cream! (The owners refused to tell me their secret to such a creamy creamless dish.)

German Fries: Who doesn’t love hash browns? Mixed with onions, these chunks of potatoes were nicely seasoned and charred, and complemented everything perfectly. 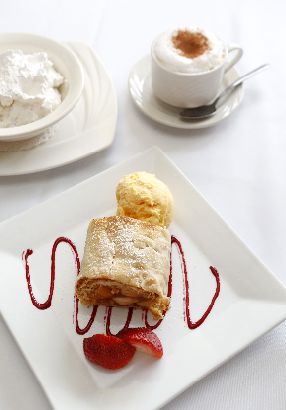 Cungu recommended a 2011 Decoy Cabernet Sauvignon from Napa Valley’s Duckhorn Vineyards to go with our prime sirloin. It was nicely dry, full-bodied, and velvety; a perfect pairing. “With steak, Cabernet is one of the best wines,” explains Cungu. “If you want new vault, you have California; if you want earlier, more vintage, you want a Bordeaux.”

For dessert we took the recommendation of the waiter and had the apple strudel with homemade schlag, a sweetened whipped cream. The strudel was wrapped around in a layered flaky circle with cinnamon in between the layers, and served alongside a deep yellow French vanilla ice cream. The schlag, a huge mountain of sweet fluffy whipped cream, was served in a separate bowl, and I’m not ashamed to admit that we ate it by the spoonful once we were out of strudel to put it on.

The clientele typically ranges from thirtysomethings to seniors. It’s the perfect spot for folks looking for a city-quality dining experience, or a family looking to celebrate a special occasion. I imagine they’ll do quite well in the upcoming graduation season.

Downstairs, the beautiful wine cellar room features a large dining table that can seat 24, as well as a more intimate table for two inside the colder temperature-controlled vault (I imagine many proposals take place in there!). The room can host wine tastings, business meetings and birthday parties, and magnums and double magnums of wine can be special-ordered for events.

We’ve been told that on our next visit, we really MUST try the impressive seafood tower of oyster, clams, shrimp, crab meat and lobster cocktail. And for dessert, I’m going to give the mixed berries Romanoff a try (accompanied by another wonderful mountain of schlag).

Downtown Sparkill is a short walk; the restaurant also sits at the base of Ferdon Avenue, which leads directly into Piermont. Wine shop Grape D’Vine is a Sparkill attraction, as is the Union Arts Center. Piermont has that great pier for a romantic post-dinner walk (though I’d recommend driving from the restaurant to the pier on all but the loveliest of evenings).