Grab Another For Mother! 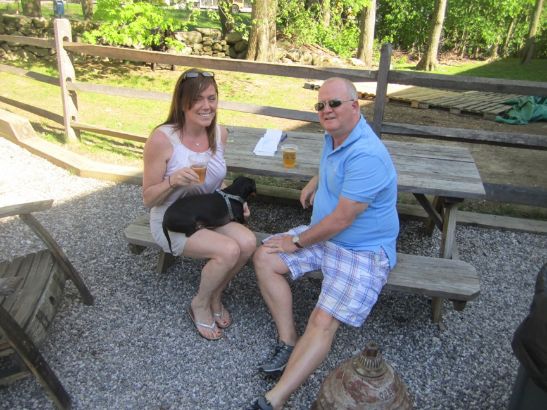 Brewery tasting rooms have come a long way in terms of being socially acceptable places to celebrate special occasions, but it may be a few more years before they rival the popular brunch spots on Mother’s Day. On a sparkling day that simply begged for both a Sun Block and a dash of sunblock, the moms don’t know what they were missing at Captain Lawrence.

Chris Huber and Stuart Hemphill made the most of the year’s nicest day to cycle up from Manhattan, along the smooth and inviting rail trail that takes one through the Bronx and just about a mile short of Captain Lawrence’s Elmsford digs. They got into cycling while both were in Cambodia in the Peace Corps, says Stuart.

“I love beer and I love biking,” he adds. “I thought it would be great to combine the two. I’ve always loved Captain Lawrence and was curious to try some samples here.” 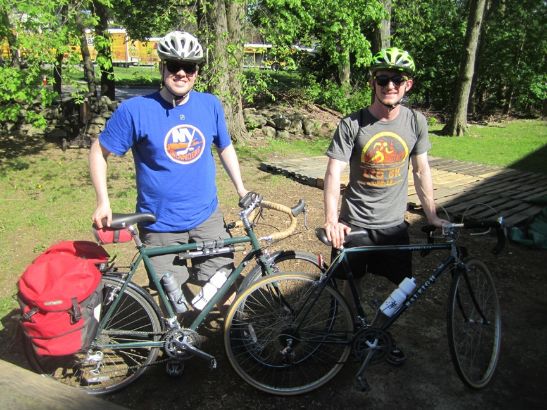 Chris picked up his ride, a Raleigh Marathon, at the Brooklyn Bike Fair just a few days before. (The schlep from his East Harlem home is, in fact, a few miles short of a marathon.) He’s found a new beer: the Belgian-style, dry-hopped tripel ale known as Xtra Gold. “He introduced me to the good stuff,” Chris says, nodding at Stuart.

Stuart mentions how nice it is to get out of the city on a day like this, and that was the motivation for Mari Burder of Woodlawn in the Bronx. She and Tom Schum checked out a number of Westchester parks, including Glen Island, and found them too crowded. They were on the Cross County, en route to Tarrytown, when Mari yelled out an audible: Captain Lawrence! Tom cut across several lanes of traffic and made the exit in one piece.

Moments later, they are chilling on the patio with dachshund Bud and a couple glasses of the hoppy wheat ale Sun Block. “This is the kind of beer where I could take a six-pack to the beach,” says Mari, who hails from Derry, Northern Ireland.

Mari has a happy Mother’s Day tale to tell: Her 15-year-old son woke up early (at least for a 15-year-old), walked his bike to the gas station, filled his tires with air, and cycled to CVS to pick up a Mother’s Day card for Mom. Mari beams as she relays the story. 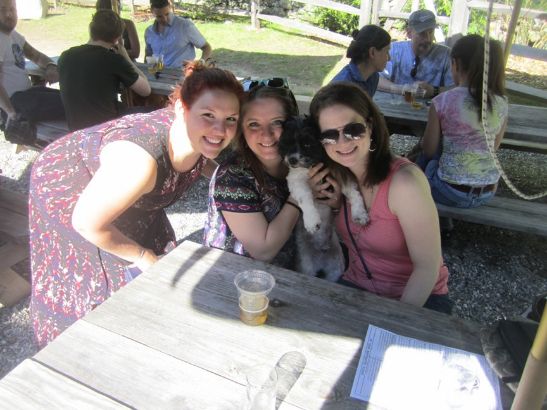 Bud is making fast friends with a tiny Havanese named Spencer. Human companions Melodye Brant and Katie Yamulla of New York City finished up work at New York Medical College, put in a call to pal Jen Stone, and the threesome–plus Spencer–promptly found a table on the patio. Melodye enjoys “my new favorite,” the Xtra Gold, which weighs in at a whopping 10% ABV. “It’s smooth and drinkable, and gets you where you want to go,” she says. (Speaking of getting you where you want to go, Melodye stresses that she’s not the driver today.)

Jen has the Sun Block and Katie, who’s still raving about the late, great, mega-meaty pilot brew Kevin’s Bacon Ale, opts for the Liquid Gold. Spencer, meanwhile, digs into a mac and cheese from Village Dog.

There’s a game of bocce going on, and a friendly cornhole competition as well. Both go perfectly with Village Dog vittles, beer samples and a postcard-blue sky.

But the al fresco scene isn’t for everyone. Inside, the Yeah Yeah Yeahs crank from the house system, beertender Jack tells tales of a Mother’s Day keg party (it was Captain’s Reserve Imperial IPA, if you’re scoring at home) and Doug calls out for the 4 p.m. brewery tour. 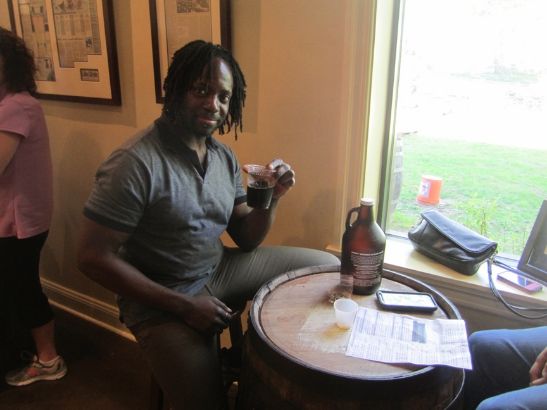 Adrienne Rivers sips a sample alongside Shawn Bennett, both of White Plains. Both quaff small-batch brews: she the malty and sweet Larger Lager, he the deep, dark Black Lodge Stout. “I give props to any mom who goes to a brewery on Mother’s Day,” says Shawn.

He got a rose for his mother, and gave her a kiss on both cheeks. Adrienne, for her part, got a half dozen roses and a homemade breakfast from her daughter: eggs, sausage, grits.