People are reading
You are at:Home»Columns»I Eat Plants: China Garden in Rye

China Garden in Rye is a small restaurant; it appears that they are mostly aimed at the take-out crowd, though the inside is very pretty if you do want to dine in.   Indeed, they do have a vegan menu with a number of mock meat dishes. 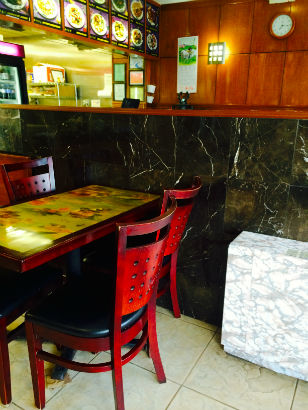 The mock meat itself is pretty similar to what they use at Veggie Heaven, but the sauces are a bit different, and of course, the whole menu is not vegan.  Of note, the menu says “New Vegetarian Menu” but it notes all of the mock meat dishes as vegan.

I wasn’t in love with some of the sauces, but they were definitely serviceable, and if you’re going to be in Rye and looking for vegan takeout, this is definitely the place to go!

The menu online looks a little different from the printed menu/menu in the window. 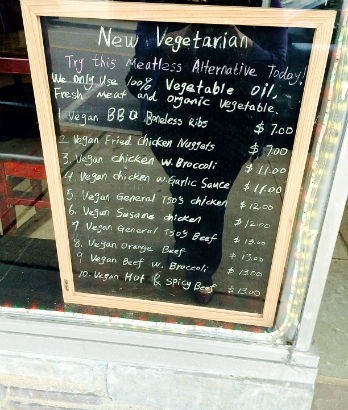 Look!  It says “Vegan” right in the window!

The menu online appears to add all of the veggie dishes in, as well.  I didn’t ask if they were all vegan, but they seem to be.  I do wish they would note which other dishes in the other sections were vegan as well, like in appetizers.  I can’t imagine what wouldn’t be vegan about edemame, but it would be nice if they said, right? 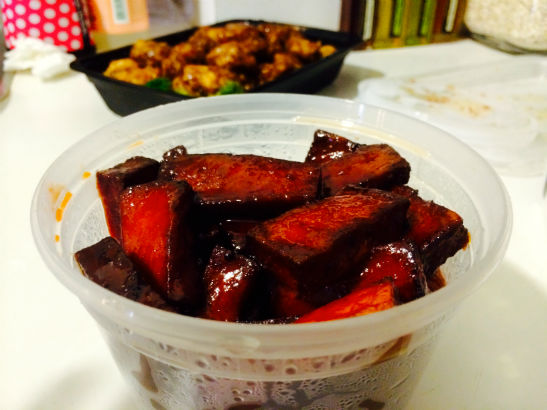 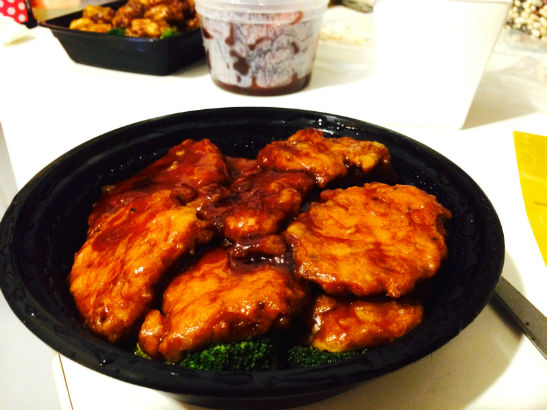 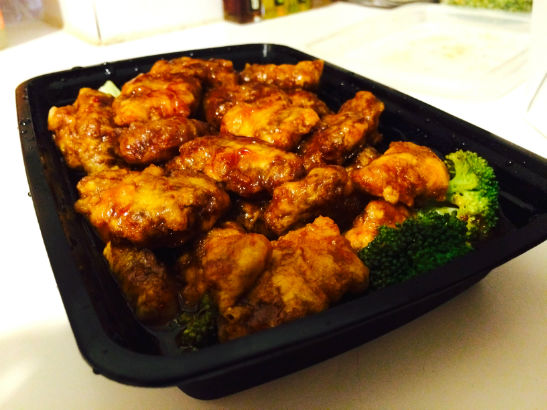 Bear in mind, this is takeout.  I was too hungry to plate the dishes myself- Rye is a bit far for me for takeout on a regular basis, but sometimes you have to do what you have to do when it comes to finding vegan foods!

I liked the orange chicken the best.  The BBQ spare ribs were not what I was hoping for, but the leftovers were pretty good in some “pork fried rice” that I made up a day later with leftover brown rice and some veggies.  Speaking of veggies, did you notice from the menu that they use organic veggies?  Not bad for a take out place!

While I would love for more all-vegan restaurants in our area, I definitely like the idea of omnivorous restaurants serving veggie fare, because I think it’s an awesome way to get people to eat more pant-based meals.  After all, if you were part of a group that ordered from here and someone ordered those Vegan BBQ Spare Ribs, you might dig in without even realizing!  Before you know it, you’re eating plant-based food and not even complaining about it.

Like with Veggie Heaven, this is not really “health food” and I’m maybe a little glad it isn’t so close to home/work, because I might be a little too willing to eat this far too often, and I’m really trying hard to clean up my eating act.  But if you’re nearby to Rye and you want to eat some veggie Chinese, you should definitely check this place out!