People are reading
You are at:Home»Restaurants»Westchester Burger Company: Restaurants We Love 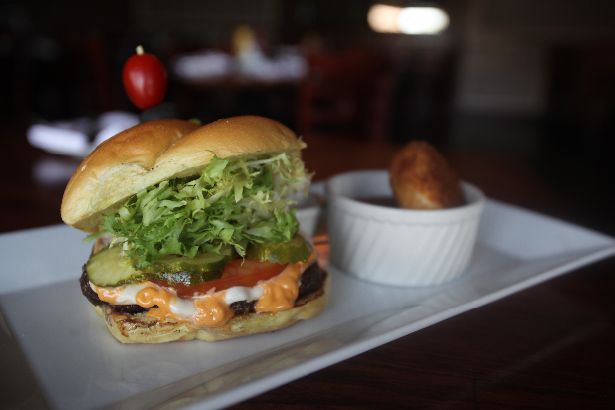 By Christine Gritmon. Read the story on lohud.com.

At Westchester Burger Company, the menu goes way beyond beef. Sure, there are 21 different signature burgers, each with an inventive mix of fresh toppings. But the restaurant also offers a variety of salads, appetizers and full entrees, including vegetable lasagna, surf ‘n’ turf and seared tuna. The bar is its own scene, offering a weekday happy hour with specials on drinks and food.

The first WBC opened in White Plains, but in three years, owners Vincent Corso, Michelle Bernal and Angelo DiFeo, who created the menu, have expanded to four locations, each sporting the signature WBC logo and a wall of exposed brick. West Nyack location’s decor features lots of rich wood molding and paneling, a mix of tin and coffered ceilings, huge mirrors that create a greater feeling of space.

“Our goal is to create a comfortable dining experience, more of a neighborhood feel, family oriented,” says Corso.

I’ve dined there many times, but this particular occasion was early on a Sunday evening — apparently family hour, which worked for us as we had our toddler in tow. 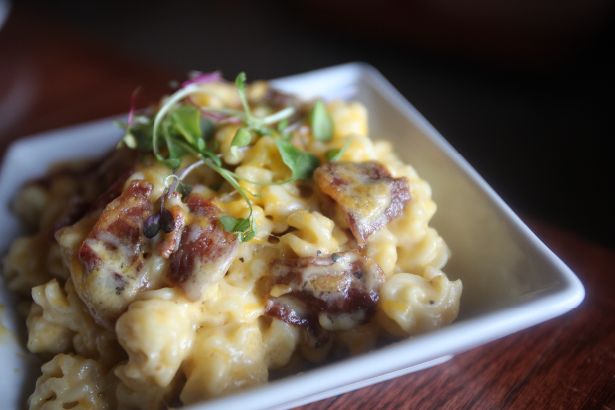 Mac-n-Cheese with Pancetta: Crinkly radiatore pasta in a mix of Velveeta and Monterey Jack cheeses, with lots of pepper sprinkled throughout. We opted to add pancetta to ours, which was a great, flavorful, smoky addition; lobster was another add-in option.

The Original WBC Burger: The one that started it all: the original 10-ounce beef burger topped with smoked mozzarella, beefsteak tomato, pickles, frisee, and their special secret “WBC sauce,” served on a brioche roll (which threatened to break apart at the swirl). As with all their burgers, it was speared with a cornichon, olive and cherry tomato garnish. The smoked mozzarella was a very thin slice (not the expected slab) with smoked edges; I didn’t taste it much. The tangy WBC sauce was the primary flavor, along with the pickles.

Bison Burger: A 8-ounce patty of bison meat, topped with truffled blue cheese crumbles, watercress and tomato on a multigrain bun. Bison is leaner than beef, plus the hearty multigrain bun had oats on top — it even looked healthy! The generously crumbled truffled blue cheese was the main flavor that came across at first bite; the tomato and watercress were just enough to enhance the burger. The bison patty wasn’t greasy, and had a slightly gamey flavor, in the best possible sense.

Kids Cheeseburger: I was pleased that the kids burger was amply sized at 6 ounces. My toddler son plowed through it; his very first burger was at WBC, and for some reason it remains the only place where he actually allows his burger to remain fully assembled instead of breaking it into its components. His regular fries had lots of pepper but not enough to turn off a kid (at least not my kid).

Sweet Potato Fries with Maple Dipping Sauce: I always order these. They’re wonderfully flavorful, fried to a bit of crispness on the outside. They’re great plain but the maple dipping sauce — syrup, cooked down, with honey and cinnamon — takes it to another level.

Potato Croquettes: I asked if they were like tater tots, and the waitress said that they were, but they weren’t at all; they’re larger, flatter pillows of potato, coated with herbed bread crumbs. The croquettes themselves weren’t especially flavorful but they came with a spicy ranch dipping sauce, which helped. 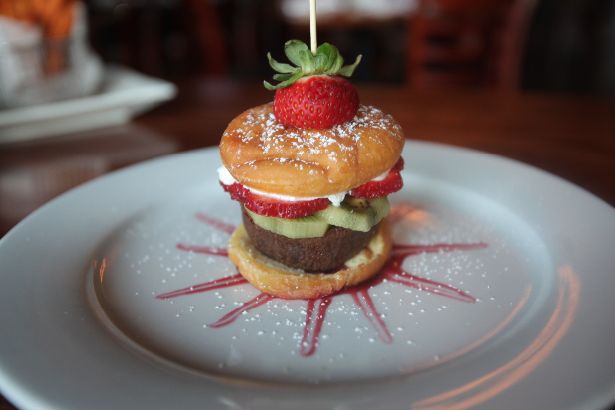 Mason jar iced teas, wine and beer, plus pear cider. There’s also a decadent shake menu; try the Italian Nutella. The Doughnut Burger is two hot, fresh doughnuts served as “buns” (with jelly as “ketchup”), molten chocolate cake is the “burger,” strawberry and kiwi slices stand in for tomatoes and lettuce. I loved the doughnuts; my husband loved the chocolate cake; our son preferred the fruit — but the elements mixed together well.

Early, the vibe is quiet with families with children, plus a handful of older guests. Later, the bar picks up with louder groups of adults watching sports on the numerous TV screens.

The building that currently houses the West Nyack location was once Fiesta Sunrise, a Mexican restaurant featured on Gordon Ramsay’s “Kitchen Nightmares.” The restaurant closed before the episode even aired.

This summer, the Rye Brook location will host its third “WBC Idol” singing competition, and award a grand prize of $2,500. Sunday Brunch will be rolled out to the other three WBC locations as of June 1. In West Nyack, Tuesday nights is “CarrieOke” (hosted by a bartender named Carrie).

The Entourage, a 10 ounce burger sandwiched between two grilled cheese sandwiches on thick Texas Toast. I’d also like to compare the Pretzel Burger to the very similar-sounding Hangover Burger, which features Monterey jack cheese, bacon, and a fried egg on a brioche bun. I also haven’t tried their delicious veggie burger yet (though I’m a big fan of their turkey burger and have ordered it with numerous combinations of toppings).