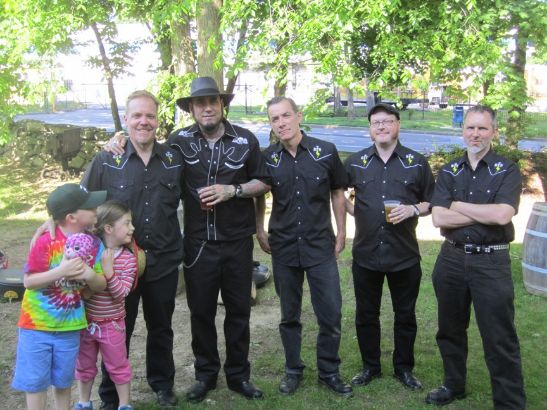 While much of the population was intent on getting out of Westchester County for Memorial Day, others were actually looking to come to the area for the long weekend–and avail themselves of the parks, the historic sites, the breweries. Caroline Kirwin and Alex White of New York City chose to spend the long weekend in Tarrytown, and popped into Captain Lawrence on a perfectly sunny and warm Sunday. 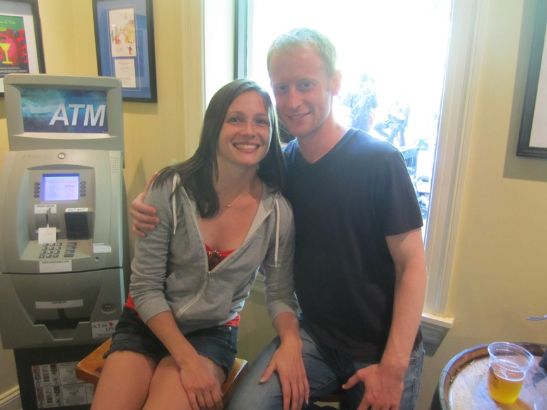 A long run that morning gave Caroline and Alex license to enjoy a few beers. Some serious cycling, meanwhile, compelled Sean Fitzell and Monica Harrington of Bronxville to enjoy a few Westchester-brewed craft beers. The pair parked their car along the old North County Trailways path, cranked out nine miles on the bikes, then toasted their effort with beer: a malty Kolsch for Monica (“biscuit-y flavor and a dry finish”, she says) and an India Pale Ale for Sean. 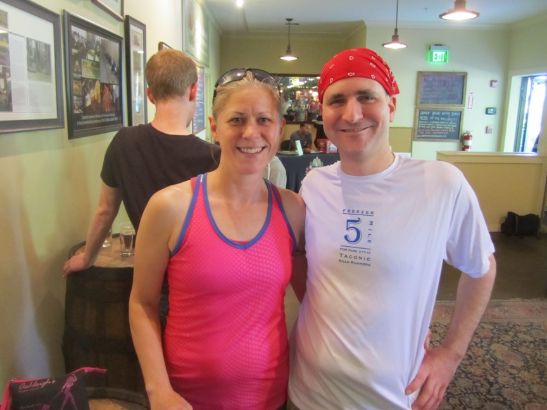 They’ll fill the growlers and head for home in a bit. “This is a natural fit,” says Monica, raising her sample glass. “This is the best part.”

It’s close to 80 and sunny out on the patio. A band is playing: Mark Sinnis and his “825” outfit, delivering a unique brand of what they call “cemetery & western” (translation: dark, bluesy, Mumford-meets-Johnny Cash country).

For Megan Russell, formerly of Hawthorne and now in the Bronx, and Misty Rankin, also of the Bronx, Captain Lawrence was a perfect midpoint between Bear Mountain and home base back in the Boogie Down. Like many thousands, they thought to go hiking at Bear, and are unwinding over a barrel on the patio, Pale Ales in hand. “It’s nice that there’s a band playing,” says Misty as the 825’ers do their thing. 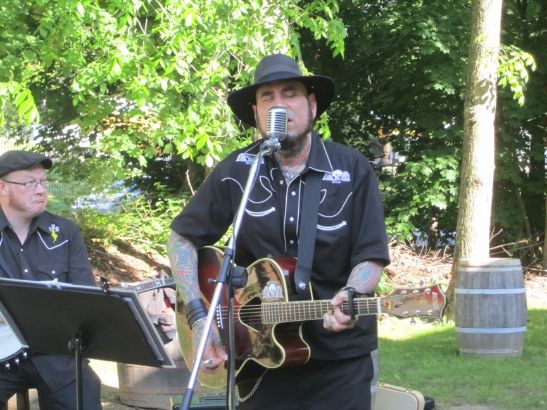 Seriously sideburned Mark Sinnis got to know various Captain Lawrence staffers by cutting their hair at his Beale Street Barber Shop in Peekskill (“Come in and feel like a King,” goes the BSBS slogan), and that resulted in a fun Memorial Day gig out in the sun. His 825 band gets its name from Mark’s birthday, August 25. It’s a unique gig for the group; Mark describes the al fresco brewery setting as “very organic, non-commercial, out of the way.”

As the rootsy set winds down, Mark searches for a beer to wet his moneymaker. An IPA arrives and his face lights up. “You bring your teacher an apple,” he says. “They bring me a beer.” 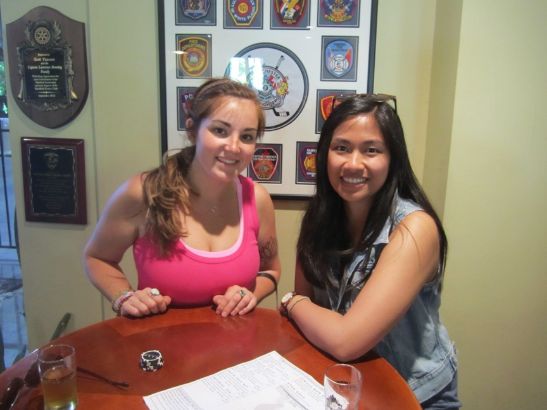 It’s last call at the brewery, last chance to try the Ginger Man Ale or the Liquid Gold, last chance to fill the growler before heading home. That’s what Ashley Pavra, from Park City, Utah by way of Hastings, and Jessica Serrantes, of Hastings, are doing. Ashley, who used to work at Cisco Brewers in Nantucket (home of Whale’s Tail Pale Ale), knows her beer: she plans to leave with 64 ounces of the big, flavorful, powerful Xtra Gold tripel ale.

Is it for a Memorial Day barbecue, a rocking house party of some sort? No, Ashley’s plans for the growler are more down to earth. “We’re planting new plants,” she says. “We’re working on our herb garden.”