People are reading
You are at:Home»Restaurants»Guides»Summer’s Hotest New Restaurants in Westchester and Rockland 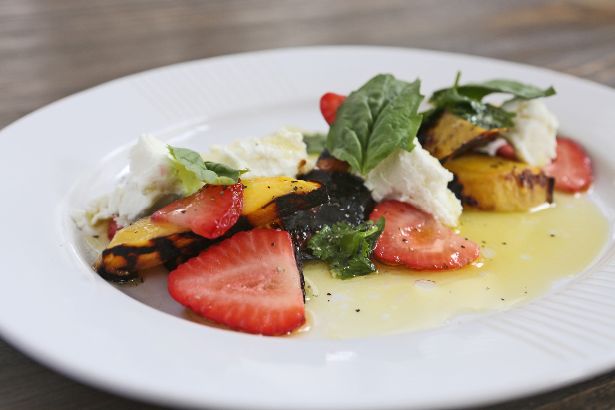 Are your old favorite restaurants starting to feel a little played out? With good weather comes new beginnings, and the Lower Hudson Valley restaurant scene is full of them. And best of all, new restaurants in Westchester and Rockland are hitting all trends: beer halls, gastropubs and pizza.

In the last few months we’ve had some exciting big-name chefs getting in on the action, too. The Inn at Pound Ridge brought the first suburban installment in the Jean-Georges family, and Michael White of Altamarea Group took over at the Bedford Post Inn.

In just a few weeks, we’ll have more new options: Ralph Croteau and Dave Tuttle of The Tavern at Croton Landing are bringing a new spot for casual waterside dining to Verplanck, Eric Korn will open a new restaurant in Irvington, and two new gastropubs are coming to Rockland: Prohibition River in Nyack and 14 and Hudson in Piermont.

Good news for commuters, too: Port Chester Hall is now serving craft beers and modern pub fare in an outdoor garden, and Love at 10541, a commuter bistro from Leslie Lampert of Ladle of Love, is headed to the Chappaqua train station in June.

And people are really buzzing about Zero Otto Nove, a legendary pizza restaurant on Arthur Avenue is undergoing renovations in Armonk, slated for a July opening.

Here are some the summer’s hottest new restaurants in Westchester and Rockland.

14 and Hudson, Piermont: Husband-and-wife team Eric Wood and Paula Clemente Wood, who met working at the W Hotel in Manhattan, are about to open this gastropubby bistro in the heart of Piermont with a 45-seat dining room, an upstairs event space and an outdoor deck.

The menu has a raw bar; snacks like calamari and pork belly buns; starters and salads like tuna tartare, baked goat cheese and frisee with poached egg and bacon; and six main courses, including organic chicken, fresh garganelli with broccoli rabe and sausage and the “Saturday Night Burger.”

The bar will serve craft beers, wine and signature cocktails using fresh fruit and herbs. It’s separated from the dining room by a brown banquette. Black and white photographs of the Hudson Valley and Piermont taken by local resident and Grammy award-winning musician Tom Chapin decorate the dining room, which has wide-plank floors and bare wood tables. Landscape paintings by Piermont artist Frances Wells hang in the upstairs event space.

Eric, the chef, was raised in France and trained at the Culinary Institute of America. He cooked at 5757 Restaurant at the Four Seasons and Blue Fin, both in Manhattan. Paula worked front of the house at The Four Seasons, Spago, Gotham Bar and Grill, Jean-Georges, Guastavino’s and The W Hotel. She’s also been an event planner and caterer.

The restaurant is named after the river and the chef’s birth order. Yes, he’s the youngest of 14 siblings.

Ralph & Dave’s, Verplanck: Just in time for the outdoor dining season, a new restaurant with river views. Ralph and Dave’s, a casual seafood restaurant with lots of great drink options, is opening this week in Verplanck in the former home of Hudson Bistro.

While the restaurant is new, friends Ralph Croteau and Dave Tuttle are no rookies. The two worked together as executive chef and food and beverage manager, respectively, at The Tavern at Croton Landing. Tuttle is also known for his popular homemade pies.

Ralph and Dave’s will offer seafood and steaks, with a heavy lean on all things seasonal and local. The menu in the dining room inside, which seats about 45, will be more upscale, with entrees in the $15 to $30 range, including a ribeye that’s brushed with a homemade barbecue sauce.

There’s an outdoor patio, too, overlooking the Viking Boat Yard, and the menu there is more casual, with raw bar items, steamed clams and grilled fish served in red checkered paper boats.

“The feeling here is you’re an eastern seaboard kind of restaurant,” says Tuttle. “Like if you’re out in the Hamptons or in Maine.”

Some of the area businesses and farms that will be featured on the menu include Newburgh Brewing Co., Slovenia Vodka, Black Cow Coffee and Fishkill Farms. Dockside service will be available.

Prohibition River, Nyack: Bailey’s Smokehouse alums Jonathan Placek and Oliver Cullen will be grinding their burgers in-house and making their own pickles at their new gastropub in the former Black Bear Saloon space in Nyack.

The restaurant has a lot of exposed brick and Prohibition-era artifacts, including an enormous 1930s radio in a wooden console. The bar top is made of 200-year-old reclaimed barn wood.

They will serve (and cook with!) craft beers, and mix their own house cocktails.

Placek worked under Bailey’s previous pitmaster David Finkelstein, who is now at Bobby Q’s in Suffern. Cullen has managed restaurants and bars in Manhattan, including Bobby Vans Steakhouse.

Zero Otto Nove, Armonk: Into the former home of Route 22 Restaurant and Bar comes an Arthur Avenue treasure. Roberto Paciullo, who owns Roberto’s and Zero Otto Nove, an iconic pizzeria with a second location in Manhattan, is opening the third Zero Otto Nove in early July.

Welcoming to families, Paciullo hopes to pull a stroller-toting Sunday supper crowd. Major renovations are adding rustic touches and a massive wine cellar to match the other locations.

The Roost, Irvington: Before Washington Irving’s property was called Sunnyside, it was known as Wolfert’s Roost, after Wolfert Acker, a Colonial-era American. Eric Korn, the chef-owner of Good Life Gourmet, figured it was a good name for the new restaurant he’s opening in the former Cupcake Kitchen space in Irvington. He’s calling it The Roost for short.

The menu will include simple, comforting dishes such as Fried Chicken with Preserved Lemon, Local Honey and Basil, and, for brunch, Fluffernutter French Toast and Chorizo Egg Rolls.

The restaurant’s footprint is the same, but Korn and his team renovated the space, redoing the wood floors and adding metal and white accents. They made sconces out of Mason jars, and are hanging local artwork on the walls. “People should feel comfortable,” says Korn. “A place to bring the kids.”

Dessert will include ice cream from Pennylick, and the restaurant will be BYO. He hopes for a late-June opening.

DVine Bar, Sparkill: Oh, the long-awaited small plates-wine bar by Joe Printz, owner of the Grape DVine wine shop in Sparkill. It’s been in the works for years, but Printz says it’s close. Real, real close. He’s shooting for the end of this month.

The menu, with about 15 small plates and five large plates, will have a twist on the classics, cooked in a wood-fired oven. A few examples: bacon and eggs with low-braised slab bacon over scrambled egg custard with a bacon jus; shrimp and fresh corn grits with a chorizo buerre blanc; wood-fired oven pizza with lamb carpaccio, yogurt, mint and cucumber; and a campfire steak, smoked and served with bacon barbecue sauce.

The chef is Christopher Holland, who owned Session Bistro in Maywood, N.J., and formerly cooked at Axia Taverna in Tenafly.

The centerpiece of the restaurant will be a square bar with 14 seats, and a few high tables nearby. There will 50 seats at tables, and another 30 on the patio outdoors. The walls will be charred white oak.

Of course there will be lots of wines by the glass. But if you don’t like any of those, you can go next door and buy a bottle of wine. Printz will open it for you, for a corkage fee.

Love at 10514, Chappaqua: Owner Leslie Lampert of Cafe of Love and Ladle of Love commuted for years out of the Chappaqua train station, and understands the challenges of finding healthy food to go.

Opening in early July, the commuter-friendly bistro in the former Train Station Depot will offer farm-to-table soups, stews, panini, sandwiches and salads to grab-and-go or grab-and-stay. Short on time? Pick up lunch for the office or a full dinner to bring home. Free wi-fi, seats for 40 and a new cappuccino machine makes the spot friendly to customers looking to get some work done, and a market section will sell local produce, fresh flowers and artisanal condiments.

Expect similar prices and menu items to Ladle of Love, with the bonus of a seasonal bar at the old ticket booth that will rotate themes, like a hot chocolate bar in the winter and a flatbread bar in the fall. Look for changes to begin this week, when Lampert takes over the coffee service in the space.

Port Chester Hall: The bar cars on Metro-North might be retired, but a sunny spot to grab a cold beer at the station will soften the blow. The huge new food hall at the Port Chester station comes from the Heartland Brewery group, and has a beer pavilion and garden, 12 in-house craft brews, cocktails, wine and a full menu of beer-friendly fare like pastrami Reuben spring rolls, bacon and chicken mac ’n’ cheese and fish tacos.

The Inn at Pound Ridge by Jean-Georges: An ultra-chic dining destination that doesn’t disappoint. Each dish shines with signature Jean-Georges magic: a little heat, a little sweet, a little acidity, a little umami. The 1800s era building was given a stunning revamp that restored the restaurant’s seven fireplaces and incorporated ash blonde tables, mismatched antique silverware and two marble-topped bars.

The chef de cuisine is Blake Farrar, who formerly cooked in Jean-Georges’ restaurant The Mark in Manhattan, and he’s joined in the kitchen by another Jean-Georges alum: his wife and pastry chef Melody Farrar. Dinner entrees like rustic charred pizzas, crispy organic chicken and grass-fed burgers range from $19 to $38, and a new daily brunch menu offers sandwiches and jazzed-up breakfast faves like eggs Benedict with smoked salmon, Niman Ranch ham and roasted potatoes.

Campagna, Bedford: Opening in early June, the new restaurant taking over the Farmhouse space at The Bedford Post Inn comes from chef Michael White, who owns 10 other restaurants, seven of which are in New York. White says there are no major renovation plans, and guests can expect lower prices than in his Manhattan restaurants such as Marea and Ai Fiori.

Look for what makes his other restaurants such a success: flavorful in-house pastas and lots of fresh seafood. “One thing that Richard [Gere] is extremely keen on is the ability to come back more than once a week,” says White. “People don’t have to come for the full monty — just a salad and a great pasta then head home.” The Barn is remaining during renovations on Campagna.

One Twenty One Restaurant, North Salem: A month-long facelift at the horse country favorite tossed the old copper bar and menu. The new look is polished modern-rustic, with a marble bar top, reclaimed oak tables and wood stump seating around a revamped stone fireplace.

And instead of the standard three-course layout, chef Beck Bolender (another graduate of the Jean-Georges restaurant school) designed a new American-tapas menu format: sharable plates are divided into categories (vegetable, meat and fish) that increase in portion as you read down the list. Dishes range from $5 to $23, and include some sensational vegetarian-friendly dishes like charred cauliflower steak with goat cheese and sherry or sweet roasted fennel, served in a puddle of creamy cured olives.