People are reading
You are at:Home»Restaurants»Twisted Oak, Tarrytown: Restaurants We Love 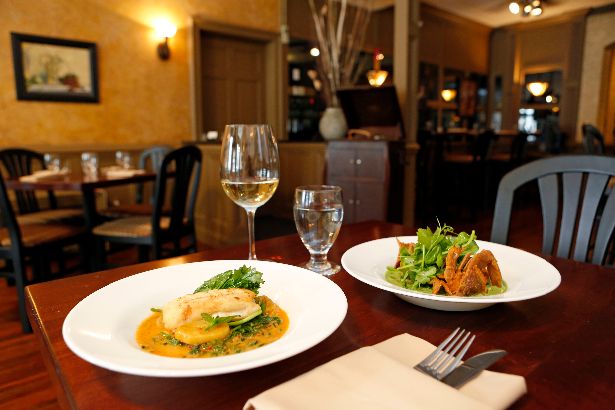 Since opening the Twisted Oak in Tarrytown in January, chef-owner Michael Cutney has gotten lots of good press on his new emporium of finely cooked seasonal fare with an Italian twist. And deservedly so — we had a wonderful dinner on a recent Friday evening.

Now that spring produce is finally being harvested at local farms, Cutney is able to stretch his legs a bit and get beyond the winter comfort food that everyone seemed to like so much. For now, some of those wintry favorites, like the duck lasagna, short ribs and rabbit garganelle, are still regulars on the menu that changes nightly, depending on what Cutney feels like cooking and what’s arrived in his kitchen. 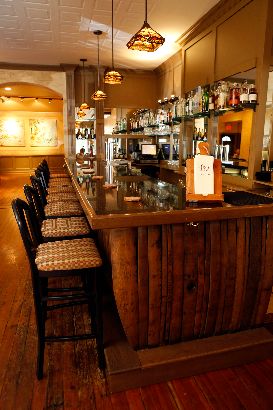 “I don’t change every dish every day,” says Cutney, who has cooked at Cafe of Love in Mount Kisco and Union Square Cafe. He gets his Italian inspiration from his family upbringing and the time he spent as an apprentice to the world-renowned Fabrio Picchi in Florence.

At the Twisted Oak, Cutney’s front-of-the-house partner is Jacob Parenti, a friend from childhood. Parenti’s family’s custom woodworking business handled the renovation of the space in a 100-year-old building, the former home of Isabella’s Bistro. The welcoming bar is made from the staves of French oak barrels reclaimed from their friend, local vintner David Lionheart.On our visit, the service was excellent — friendly, professional and very knowledgeable about the food. It’s the kind of place where everybody does everything, whether it’s taking an order, bringing drinks, explaining a dish or busing tables.

Duck Lasagna: We just loved this. All of the pastas are made in house, here layered with braised duck ragout, topped with a fried duck egg and swimming in a hot, deeply flavored duck broth.

Meatballs: This is another comfy winter favorite that has earned its keep on Cutney’s ever-changing menus. Deservedly so. So tender, so light. The meat is a mix of pork and beef, with a creamy tomato sauce, locatelli and basil. 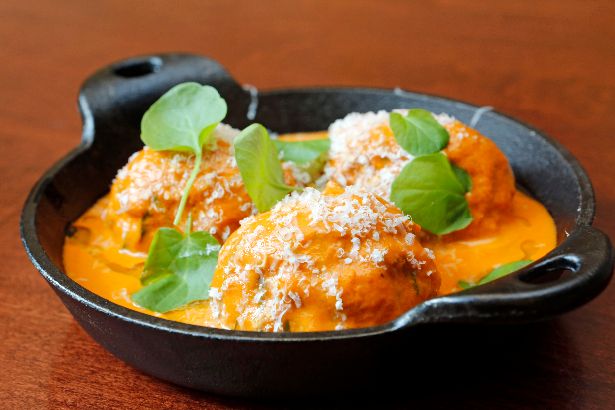 Chatham Cod: Another total winner, with linguiça — but lately served with ‘nduja, a spicy, spreadable pork sausage from Calabria. The fish and sausage come with very tender and sweet baby red onions, banana fingerling potatoes and rapini. The mix of cod with linguiça so reminded us of homey Portuguese restaurants in Provincetown, Mass. The dish was surprisingly spicy, which was initially off-putting, but by the third bite we loved it.

Soft Shell Crab: This seasonal favorite, a pair of battered and fried soft shell crabs, was served with barley, speck, spring peas, nettle cream (a dreamy shade of green) and preserved Meyer lemon. Every ingredient seemed right on the season, and it all came together well. Cutney says he should have the crabs till mid-July.

We liked our French Blonde cocktail, a bright concoction with Lillet blanc, St. Germain, gin, lemon bitters, grapefruit juice and a Champagne float. Ditto for the glasses of sauvignon blanc by Mulderbosch, a South African vineyard. There are craft beers available, and Cutney says he’s still building the “small, well-chosen wine list,” which includes some standouts from the Finger Lakes. There’s a selections of craft beers, with Captain Lawrence, Newburgh Brewing and Bronx Pale Ale on tap.

Among the half-dozen or so desserts, we enjoyed our Lemon Angel Pudding. Made with Meyer lemons, the bottom is custardy and the top is like a crusty angel food cake. A delicious scoop of bourbon vanilla ice cream is served on the side.

“We get a little bit of everybody,” Cutney says. “A lot of hipsters and industry professionals. A lot of foodies, which is what we like.”

Check ahead to see what’s playing at the nearby Tarrytown Music Hall. Big shows can make street parking a nightmare. Cutney says he wants to open for lunch before long. And look for that back room to open soon.

The Amish Chicken. It landed on the next table just as we were leaving. Looked divine.

The Tarrytown Music Hall is just up the street. 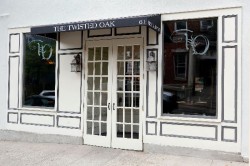