People are reading
You are at:Home»Restaurants»Must Try»LoHud Hot Dog Tour: The Ultimate Indulgence – So Dam Hot

*Hot dogs are sort of the last vestige of cheap, gooood eats. From BBQs to beachside to ball games, they’re arguably the quintessential summer food and our region has no shortage of iconic places to find ‘em. With a toddler in tow, I’m on a kid-friendly quest to taste the best of the best.

It was the first damn hot day of the season when we charged just a few clicks up the Bronx River  past our normal stomping grounds. 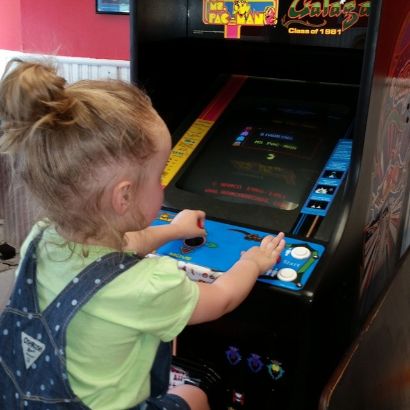 Valhalla’s So Dam Hot looks like your run of the mill pizza place storefront but has anything but run of the mill offerings once inside. We were in it for the dogs that day but a display revealed an abundance of hot sauces to choose from and I knew there were more wonders lurking within the menu of this seemingly mild-mannered eatery. We ordered up our dogs with little frills this time around because we were feeling pretty straightforward on this hot, hot day. Until we spotted it – a possible  game changer. A list of combos so divine they threatened to destroy our entire “keep it simple” plan. From pulled pork to chicken wings, the works of all things tasty was at our disposal. After a long deliberation to go for the Reservoir Dog Fries (topped with melted cheese, hot dog bits, chili & onions), we ultimately arrived on The Chubber Fries.   Smothered with cheese, chopped  chicken fingers, bacon and any dressing you would like, my party joined forces to chow down.  I don’t think I need to spell out that this choice was a wise one and our split & griddled dogs were just as delicious. 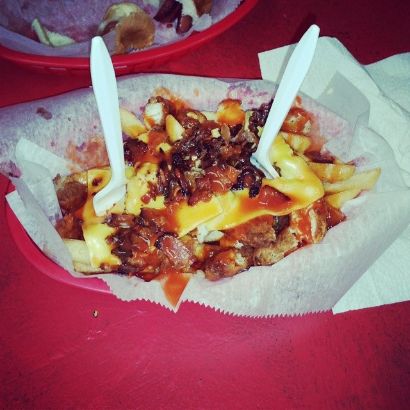 Sometimes you just want to go for broke and indulge. With an army of choices at the ready, So Dam Hot is definitely the place to hit up for nearly any craving, that’s for Dam sure.