People are reading
You are at:Home»Recipes»Condiments»Romesco Sauce: Spice Up Your Summer Cooking!

Originally from Catalonia, in Spain, it’s made from red peppers and almonds, and traditionally served over seafood. It’s sweet, spicy and smoky — and terrific.

Why to love it: “Romesco sauce is the epitome of contrasting flavors and textures,” says Jodi Bernhard, executive chef at Fortina in Armonk, where she makes it with hazelnuts, and serves it over roasted cauliflower. “The creaminess of blending red peppers and contrasting with the crunch of nut in there, a nice little transition from the sherry vinegar and the pungency of the garlic, it’s just this great burst of flavors.”

Make it your own: Use hazelnuts or walnuts instead of almonds. Experiment with different peppers, like Fresno, pimento or even ancho.

We’re featuring 3 sauces to spice up your summer cooking! Here’s the story: Make your next steak your best steak!

To see the others, click here:
Pesto!
Compound butter! 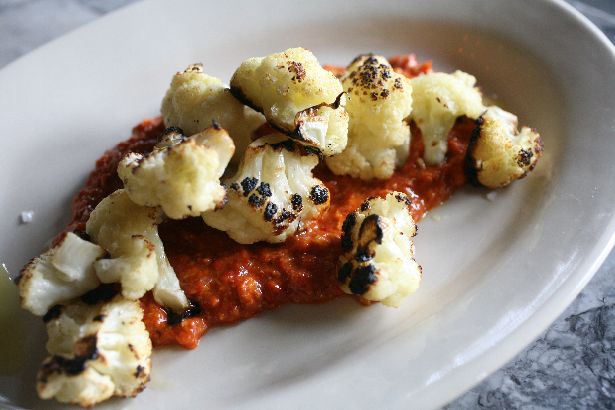 This recipe, from Fortina chef Jodi Bernhard, replaces almonds with hazelnuts, and adds Fresno peppers along with the roasted red peppers.