Raising a Cup to the World Cup 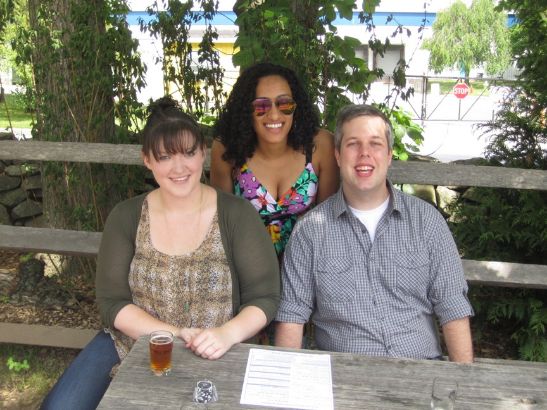 As we’ve detailed in the past, beer goes well with watching baseball, and football, and most any other sport. We can add soccer to the list; after all, the best teams compete for a Cup every four years, the matches are best enjoyed in the pub if you don’t have tickets, and the U.S. and Belgium—two of the finest beer-brewing nations around the globe—do battle in the knockout round July 1.

Much of the nation is stricken with this quadrennial affliction known as World Cup fever, and those who hang out at Captain Lawrence appear to be no exception.

“I’m a fanatic, I admit it,” says Ian Duffy, who stopped into the brewery with wife Ashlee as they relocate from Boston to Charlottesville, Virginia. “I live and breathe and die soccer.”

His pal Thomas Grove of Yorktown is cut from similar cloth. Thomas watches the weekly Premier League matches before the NFL games kick off, rooting for the various American players, such as goalkeeper Tim Howard, playing in the elite English league. Thomas is very definitely tuning in when the U.S. encounters Belgium. “I’ll watch the first half on the iPad,” he says. “The second half…long lunch.” 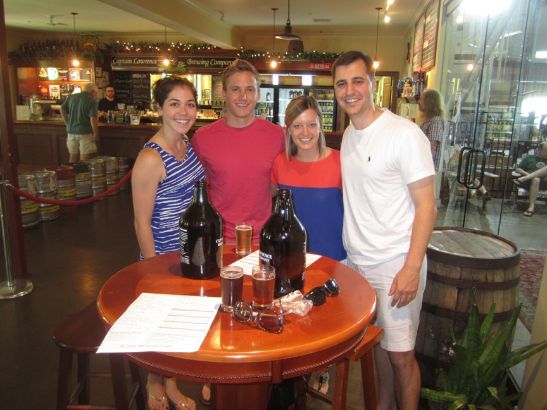 Thomas digs the small batch beers on this day, including Ryan Kipp’s Sleepy Time Saison and Justin Sturges’ summer IPA known as Sippa. Their friend Arianna Corona of Valhalla sips something stronger than her namesake beer. She’s not a huge fan of soccer, but has enjoyed watching the U.S. in its dramatic escape from the so called Group of Death. “It’s a fun opportunity to socialize,” Arianna says.

But elsewhere in the tasting room, Mike Farrell of Portchester gives soccer a big ho hum. “I don’t care,” he says. “I never really did.”

His wife Sara, however, sounds fully committed. She expresses disappointment in Landon Donovan not making the American team, but is glad Kyle Beckerman rocks the U.S. jersey. “Without the dreads, he’d be so cute,” she says.

Sara digs the Brown Ale, while Mike goes for the Matt the RIPA red IPA. Their friend Donna Silverstein of Greenwich plans to leave work early to watch the U.S. match. “I’m very interested,” she says. “It’s so fun to watch.” 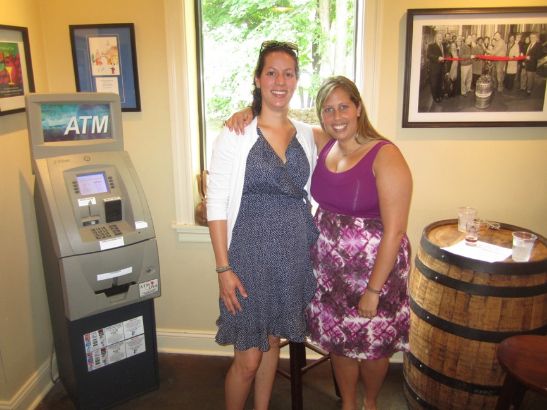 There’s another party of mixed interest out on the patio on this sunny and warm Saturday. “I’m not really watching,” admits Mike Winters of Hopewell Junction as he sips the Belgian-style Ginger Man. “I’ll watch the highlights on SportsCenter.” Pal Angela Cappello of Yonkers, quaffing the India Pale Ale, sings a different tune—albeit a hoarse one. “I almost lost my voice during the last U.S. game,” she admits.

With the bar exam coming up, Angela promises to be more mellow for U.S.-Belgium.

Their friend Shannon Carney of Hawthorne falls somewhere in the middle. She works for a German automotive company, which rolled out the projection screens, handed out the Heinekens (we won’t mention that Heineken is a Dutch beer), and mandated a two hour break for the U.S.-Germany match last week. “I don’t particularly care,” Shannon says. “They care.”

Shannon suggested the visit to Captain Lawrence on this day, getting the idea while visiting Harpoon Brewery in Boston recently. “It was my idea,” she says. “It’s my fault if it all goes wrong.” 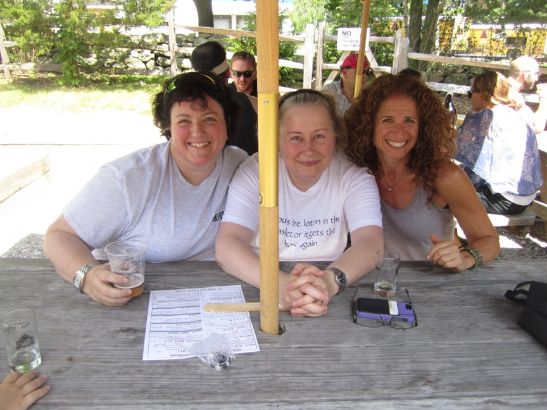 In fact, the most diehard soccer fan at the brewery may just be Debra Rivel of Teaneck, who recently attended the U.S. versus France women’s match in Hartford, signed up for the VIP experience, got an official jersey with her name on the back, and met the players. She’s celebrating a one year work anniversary over beer samples with coworker Amy Ojerholm and friend Jenn Long, both of Yonkers. Amy was cut from her high school team and shows no love for the so called Beautiful Game. Jenn, rocking a Captain’s Reserve Imperial IPA t-shirt to match her sample, is slightly more interested in what’s going on down in Brazil.

Debra, on the other hand, will disappear to a quiet corner of the office Tuesday, where there’s a smartboard with a live stream of the soccer action.

Four years ago, she took her daughter to the Women’s World Cup in Germany. “You can’t be in Germany and not drink beer,” Debra says. “To me, beer and World Cup soccer just go together.”