People are reading
You are at:Home»Restaurants»Dumpling + Noodle in Bronxville: Restaurants We Love 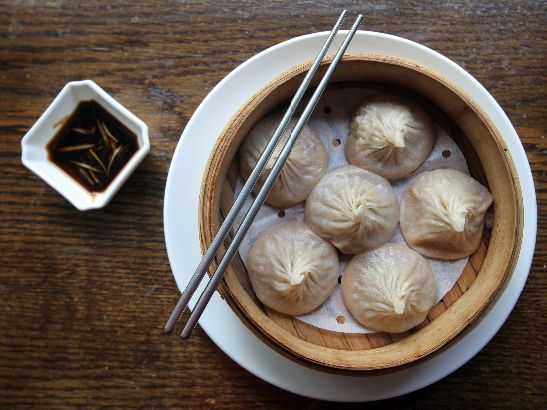 For a restaurant with such a varied menu, the name Dumpling + Noodle seems a bit of an understatement.

Sure, the emphasis at this small Bronxville spot, open since January 2013, is on the dumplings and noodles that reflect a variety of Asian cuisines. But there are other great options here — everything from Thai and Malaysian curries to Chinese and Vietnamese soups — that pair well with the main attraction and make for a more interesting meal.

Even those who don’t particularly like dumplings, or noodles, will find themselves happy with the menu’s alternatives. Dishes like barbecued spare ribs, chicken with oyster sauce, roast duck and spicy beef salad are among the lower-carb alternatives, with portions large enough to share and prices that are very reasonable.

Though the food comes quickly, you’ll want to linger and enjoy the atmosphere. There’s a Zen-like calm to the narrow 40-seat space, with dark wood floors, white-brick walls, soft lighting and a peacefulness that is instantly relaxing.

Cool, tranquil and delicious, this is Asian fusion at its best.

Steamed Shrimp Dumplings: Five puffy dumplings, arranged in a circle, and bursting with the mingled flavors of shrimp and ginger. They came with a dipping sauce, described to us simply as “dumpling sauce” made specially in the kitchen. It was thin like soy sauce, but tasted brighter and more interesting.

Chicken and Vegetable Dumplings: Six pretty dumplings, with a leaf-like pattern pressed into the dough, were filled with ground chicken, celery, scallion and ginger, and served with that same secret-recipe dumpling sauce. 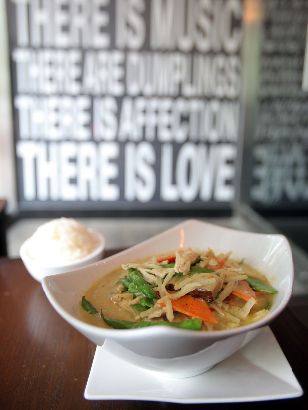 Tom Yum Soup: We got the smaller portion, but it’s available in a large size too, which includes noodles. The soup we ordered had nice pieces of shrimp in a spicy broth, with lots of mushrooms, tomatoes and cilantro, and the flavors of lemongrass and lime.

Chicken Pad Thai: Rice noodles, with eggs, onion, scallions and bean sprouts — a traditional Thai dish prepared expertly here — tasted even better once we mixed in the crushed peanuts served in a little dish on the side.

Thai Green Curry: Nice and spicy, this pretty dish had eggplant, basil, string beans and bamboo shoots, blended in a creamy coconut-milk sauce. We chose thinly sliced beef as an add-on, but even without any of the optional additions (tofu and vegetables, shrimp, chicken, fish or mixed seafood), this dish is a standout.

There’s no hard liquor here, but plenty of other options: sake, red and white wines by the glass, and a selection of imported beers from the Philippines, Japan, Thailand and India. Non-alcoholic beverages abound, from bubble tea with jelly toppings to milk teas to exotic smoothies and teas in flavors like lychee and palmberry. Desserts include steamed taro, red bean and custard buns; flaky taro and red-bean pastry; and fried ice cream. We opted for a simple dish of vanilla ice cream with strawberry sauce — not quite exotic, but a nice end to the meal.

This is the kind of place that’s popular with everybody — couples, families, after-work crowds — so you’ll see all sorts of people here, depending on when you go. If you want more privacy, ask for a table in the back, as the restaurant does a brisk takeout business, and there’s lots of friendly chatter up front.

The lunch special (11:30 a.m. to 3 p.m.), also offered on weekends (but not holidays), costs $8.95 and includes a salad, a small dish, an entree and a drink. The owners plan to open another restaurant this summer in Hartsdale, tentatively titled Fantasy Asian, says manager Jenny Berbano.

Berbano says the most popular dish on the menu is the steamed pork soup buns, filled with ground pork and ginger. They definitely look pretty — and they’re at the top of our list for next time. 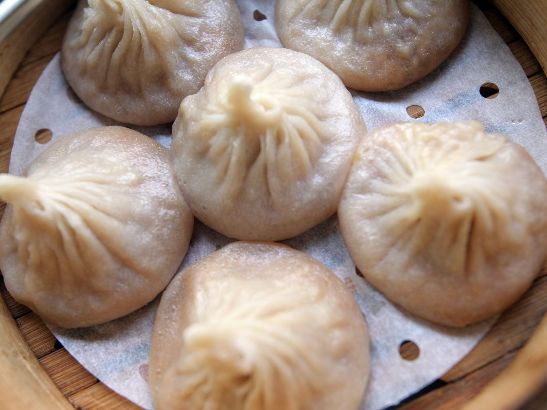 Sarah Lawrence College is less than a mile away, so this makes a good dining spot if you’re attending an event at the school. If you walk under the railroad overpass — not a long distance at all — you’ll get to the other side of Bronxville, where there’s a Bow Tie Cinema, part of a chain that often shows independent and foreign films. Lawrence Hospital is directly across from the restaurant.

By Linda Lombroso. Read ‘Noodles, dumplings and a whole lot more’ on lohud.com.